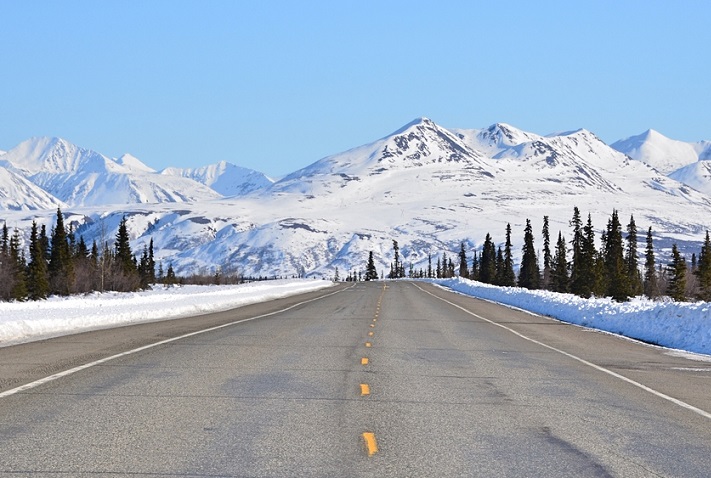 Rural highways in Alaska, like the one pictured, along with bridges and ports are among the beneficiaries of the $1.5 billion in discretionary grants announced Tuesday by the US Department of Transportation. Photo credit: Shutterstock.com.

From Alaska to Arkansas and Alabama, rural highways, bridges, and ports benefited from $1.5 billion in discretionary grant funding announced by the US Department of Transportation (DOT) Tuesday. The grants will fund 91 projects in 49 states and the District of Columbia, including improvements to interstate highways and new truck lanes at the US-Mexican border.

And that’s the story in Washington, DC, where the Trump administration’s initial $1 trillion infrastructure plans ran into the same obstacle hit by previous plans — an inability to agree on funding mechanisms that would pay for infrastructure repairs, let alone expansion. The White House is preparing another go at its plan, with perhaps more federal spending.

For now, the BUILD program is a “down payment” on the administration's infrastructure commitment, as US Secretary of Transportation Elaine L. Chao said when announcing the BUILD grants. The last major multi-year infrastructure spending bill, the Fixing America’s Surface Transportation or FAST Act of 2015, authorized $305 billion in funding through 2020.

91 projects receiving an average of $17 million

The 91 projects received about $17 million on average, with 21 projects getting $20 million and 12 projects $25 million, the largest amount granted. And while many of the projects are situated in rural areas of states such as Louisiana, Arkansas, Kansas, and Montana, BUILD also allocated $25 million for masonry repairs to the foundations of the Brooklyn Bridge.

The DOT divided the funding between highway, rail, port, and transit projects. Almost half of the 91 grants went to road or highway projects, with another five combined bridge and road grants, but BUILD funded six port and four additional port rail projects. Those funds included $15.5 million for the Virginia Inland Port terminal optimization and grade separation project.

South Carolina will receive $25 million for freight rail infrastructure improvements at Inland Port Greer, and $20 million will go to extend the Port Arthur, Texas, Berth 5 wharf by 1,000 feet to create Berth 6 as a crane-capable wharf, and to improve the existing rail system to provide a direct connection between the existing rail spur and the dock tracks at berths 5 and 6.

About $19.4 million in grant money will expand rail access to the Columbia River Barge Terminal in Oregon, and $5.8 million will be spent on improving rail and road access at the inland Port of Muskogee in Oklahoma. Maryland’s Seagirt Marine Terminal will get $6.6 million to add a second berth capable of serving 50-foot-draft ultra-large containerships. The Port of New Bedford, Massachusetts, will get $15.4 million for its North Terminal expansion project.

On the land side of international trade, California will get $20 million to widen the Calexico East Port of Entry bridge on the US-Mexico border to accommodate two new northbound commercial truck lanes and two new passenger vehicle lanes.

The BUILD grant is funding also some rail and freight specific projects, such as a $10.8 million upgrade to a section of the New England Central Railroad in western Massachusetts, including strengthening of about 20 bridges, and $22 million for railroad improvements that will help relocate and expand an Amtrak/Union Pacific Railroad corridor in Springfield, Illinois.

Most of the projects are concrete, in the sense they involve asphalt paving and other traditional construction activities, but a few are more technological or futuristic. In particular, Nevada will get $5.3 million to provide autonomous and connected vehicle service, pedestrian safety devices, and smart transit shelters to the Las Vegas Medical District.

Infrastructure advocates can only hope the grants whet the appetite for bigger, broader infrastructure plans and so-far elusive cooperation on Capitol Hill and in the White House.