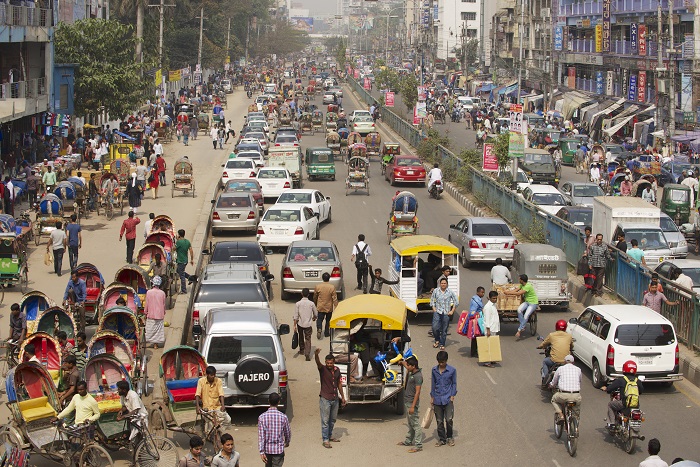 In 2017, Bangladesh exported $32 billion in goods and imported $45 billion — the bulk of it via vehicle transport to/from the port. (Above: A busy road in Dhaka, Bangladesh.) Photo credit: Shutterstock.com.

The government of Bangladesh will relax its axle load rules soon, for the time being, to assist goods transportation during the holy month of Ramadan and the largest festival of the Muslim community, the Eid al-Adha, on the already congested Dhaka-Chittagong Highway.

Historically, goods imports increase ahead of and during the holy month in Bangladesh, a Muslim majority country.

Chittagong Chambers of Commerce and Industry president Mahbubul Alam said he undertook talks with Road Transport and Highways Minister Obaidul Quader and the Secretary Nazrul Islam. The latter two assured him of issuing a directive relaxing the weight limit for trucks within a day or two.

“The weight limit will be relaxed in two to three days. If it happens, there will be no crisis of consumer goods during the month of Ramzan anywhere in the country,” Alam said at an event in Chittagong Wednesday.

Alam said 92 percent of Bangladesh’s trade volume is processed through Chittagong port. Further, more then 80 percent of these goods are transported on the Dhaka-Chittagong highway.

Under the current weight limit, a two-axle truck can carry only 13 tonnes (14.3 tons) of goods; a three-axle truck, laden with a TEU, 30 tonnes; a four-axle truck with an FEU, 40 tonnes.

Shippers have expressed concern about the weight limit because a TEU weighs 37 tonnes and an FEU exceeds 49 tonnes.

“As a result, the carrying cost of goods has become double, and that affects consumers,” said Alam, who is also chairman of the Chittagong Port Users’ Forum.

“Please don’t impose the weight limit now, to help facilitate carrying of industrial raw materials and essential commodities for the greater interest of consumers and the economy,” he wrote in a letter to Road Transport and Highways minister on Wednesday.