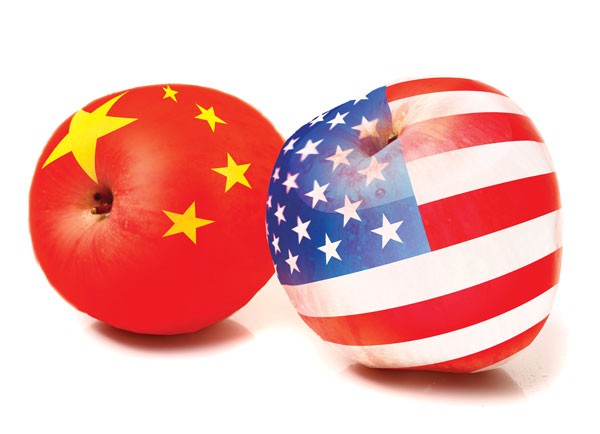 U.S. beef, Chinese solar panels, genetically modified corn and U.S. software were high on the agenda at annual trade talks the U.S. and China held in mid-January. Chinese officials also revealed the top item on their agriculture wish list: access to the U.S. market for apples grown in China.

“It makes sense that China’s No. 1 ag issue is apple access to the U.S. — they certainly grow so much that access to this market would be important,” said Todd Fryover, president of the Washington State Apple Commission. “But it does make us a little nervous.”

Fryover said the state’s growers are concerned that the U.S. apple market could be traded away by federal officials for something else, such as faster action on opening China to U.S. beef. “We just want to make sure that the negotiations are apples to apples, if you will.”

Washington state growers are eager to be able to sell apples to Chinese consumers. In 1993, China allowed Red and Golden Delicious varieties to be imported from the U.S., but it closed its borders to those varieties from the U.S. in August 2012 because of concerns about post-harvest decay and disease.

While China was never one of the top foreign markets for U.S. apples, the export-minded industry is seeking to develop a number of markets. About 30 percent of each crop winds up in the export supply pipe, which in 2012 amounted to 40 million boxes, each weighing 42 pounds. For the past several years, Washington orchards, which account for about 80 percent of total U.S. apple production, have seen bumper crops.

“We’ve taken care of the disease issues that China found, and we believe we will regain market access for Red and Golden Delicious this year, but I’m not so sure about the timing,” Fryover said. “If you had asked me in November right after our trade trip to China, I would have said, right away. Now, I’m not so sure.”

Some U.S. apples, including newer varieties, are for sale in China now, having entered through the gray market in Hong Kong.

Fryover said there was validity behind China’s initial ban in 2012. “We acknowledge that at least two of the three diseases they pointed to were present,” he said. “But we’ve taken care of that and put new protocols in place.”

On the flip side, he said the U.S. domestic industry has valid concerns about Chinese apples as well. “There are absolutely phytosanitary concerns with Chinese apples. Pest and disease problems are our biggest concern, and they do have diseases that exist in their orchards, which we’ve never had here.”

Even if market access is granted to the Chinese industry, the apples would have to be cleared by the U.S. Department of Agriculture’s Animal and Plant Health Inspection Service. “We just want to be sure that protocols are put in place to protect our industry.”

Another alarming fact is the sheer size of the Chinese industry. “We export about 30 percent of our harvest each year. They export right around 10 percent. If they increased that just 2 percent it would be about 40 million boxes, which is how many we send in total to all 60 of our foreign markets.”

But the potential Chinese market for U.S. apples also is huge. “There is a large and growing number of people in China that want high-quality food and safe food,” Fryover said. “Our products are known to be safe and high-quality.” By 2015, there will be 500 million middle-class Chinese who are “aspirational consumers. It could become a huge market for us.”