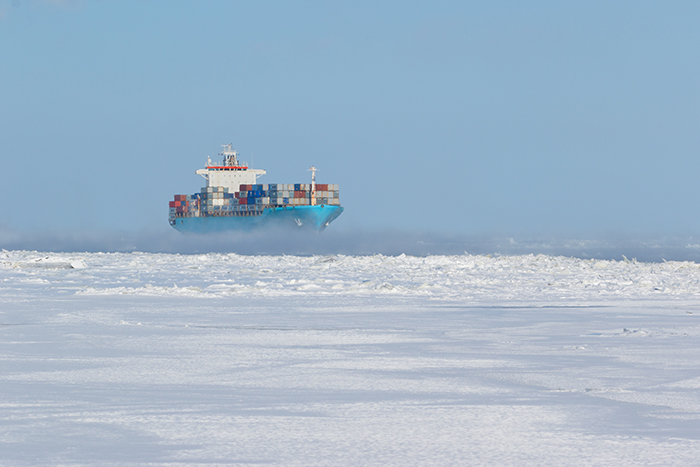 Research into harmful black carbon emissions from ships in sensitive regions such as the Arctic will be stepped up, the IMO has pledged. Photo credit: Shutterstock.com.

The International Maritime Organization (IMO) has acknowledged research showing that some blends of low-sulfur fuel could actually increase black carbon emissions from ships in sensitive areas such as the Arctic and has pledged to step up its research into the reporting and measuring of those emissions.

At a meeting of the IMO’s subcommittee on pollution prevention and response (PPR-7) this week, the organization said it had received several submissions that included proposals calling for a closer look at the aromatic content of blends of very low-sulfur fuel oil (VLSFO) that could emit higher levels of black carbon than the heavy marine oil they are meant to replace.

The IMO agreed in a statement issued after the PPR-7 meeting that “a high aromatic content, among other factors, could increase black carbon emissions from ships.”

The global shipping industry since Jan. 1 has been required to comply with the IMO 2020 mandate that caps sulfur emissions of bunker fuels at 0.5 percent, down from 3.5 percent. To comply, carriers can burn VLSFO, marine gasoil (MGO), or install emissions-cleaning scrubbers to continue using high-sulfur fuel oil (HSFO).

Concerns over the blends of VLSFO being used were raised by DNV GL and engine builder MAN. Research conducted in Germany and Finland and submitted to the IMO suggested that black carbon — the term for carbon compounds laden with dark sooty particulates — formed in marine engines using blended fuels high in the aromatics benzene and toluene when combusted at low engine loads. Where these conditions were met, black carbon emissions could increase up to 85 percent.

In a statement issued after the meeting, the IMO pledged to step up its ongoing research into black carbon emissions.

Another group that is also looking into the issue is the International Standardization Organization (ISO), an independent, non-governmental body that addressed the IMO subcommittee in London. The ISO advised that it was already monitoring properties of VLSFO and HSFO and would provide feedback on their performance.

The ISO said it would also consider the possibility of adding a measure that could indicate whether a fuel is more paraffinic or aromatic, based on the characteristics already included in the ISO 8217 standard, which specifies the requirements for fuels used in marine diesel engines and boilers.

Ned Molloy, an independent shipping consultant, agreed that more testing needed to be conducted into real-world 0.5 percent sulfur blends that were being used in compliance with the IMO 2020 mandate. He said this would bring clarity over what share of the VLSFO market was aromatic blends, and what share was paraffinic, a crucial distinction.

“If the majority of 0.5 percent blends are paraffinic, then potentially the problematically high black carbon emission aromatic blends are a subset that regulators can deal with without getting rid of the whole VLSFO market,” Molloy told JOC.com.

Findings of the PPR-7 subcommittee will be reported to the decision-making body of the IMO, the Marine Environment Protection Committee (MEPC), that will be in session March 30-April 3.