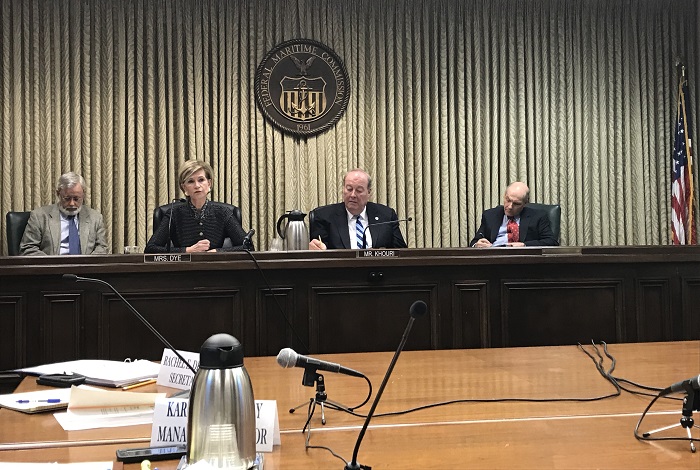 The Federal Maritime Commission wants to form an innovation team to address the concerns of cargo owners about detention and demurrage, but a final report stopped short of any regulatory action. The task force would meet on a limited, short-term basis to “refine commercially viable demurrage and detention approaches.”

There were several findings, however, which validated the concerns of cargo owners and reasons to be optimistic the teams made up of different stakeholders will be able to find resolutions.

The decision culminates the formal portion of a multiyear process to rule on the petition from the coalition to develop an interpretative rule. During testimony in January, shippers outlined an array of problems out of their control that culminated in demurrage fees. Some examples included US inspection holds, lack of sufficient terminal appointments, closed terminals, congestion caused by inclement weather, port congestion, and lack of available chassis. The frequent complaint was the lack of uniform definitions on detention and demurrage, when a container is considered available for pickup, when the clock should start on a free window before any fees apply, and confusion on how to dispute charges. Commissioner Rebecca Dye began a fact-finding investigation in March, and this final report updates an interim finding released in September.

During remarks on Dec. 7, Dye said that many of the issues can be tackled by developing a better system to notify cargo owners when their containers are available to be picked up. Shippers and trucking companies just want to know when to dispatch their drivers, she said.

“When I first discussed this approach with one of our major trucker representatives, he said, ‘Commissioner, that would fix everything’,” Dye said. “Of course it’s more complex than that. But if we can refine this approach and get buy in from all cargo interests, there should be no need for shippers, for example, to negotiate for additional storage time in a terminal.”

In a statement to JOC.com, the National Industrial Transportation League, which spearheaded the coalition’s efforts, thanked the commission for the work on the issue.

“We are encouraged that the Commission is committed to taking further steps toward efficient port operations and reasonable detention and demurrage practices. NITL looks forward to participating in the innovation teams that the Commission is establishing and working collaboratively with port terminal operators, carriers, NVOs, truckers, and others to address these important issues and create workable solutions that will increase the efficiency of the maritime supply chain,” said Jennifer Hedrick, NITL executive director.

What is actual cargo availability?

Dye wrote in the report that by determining “actual cargo availability,” many other issues can be solved and fluidity restored in the supply chain.

While this might appear simple on the surface, it’s actually quite difficult to reach a common definition for a basic term such as ‘available’.

Cargo owners believe that if a container is difficult or unable to be retrieved because of congestion, lack of appointments, terminal closures, or a government hold, then it’s unavailable. They further argue that the free window should be paused until it’s released from a government hold.

Some terminal operators contend that a container is available when it reaches the yard and not subject to any government holds. Other identified up to six prongs for availability: discharge from a vessel, assigned a location, in an open area, released from any holds, relevant fees are paid, and there is access to the terminal and a chassis.

“According to these marine terminal operators, requirements such as payment of freight, Customs clearance, and making appointments do not render a container unavailable because those requirements are within the control of the cargo interest or trucker. From the view of many marine terminal operators, when their job was done – a container was off a vessel and in an open area – it was available,” the report found.

It might also seem a foregone conclusion that an alert would be sent via electronic data interchanges (EDI) or application program interfaces (APIs) when the container is available to be picked up. Not always.

Push notifications were brought up as a solution, similar to how one would receive an alert when an order is ready for pickup.

Terminals operators warmed up to a push notification system, although some told the FMC that cargo owners and truckers often wait until the last free day even when the information can be found online.

What is detention and demurrage?

Detention and demurrage are also two basic terms, but like ‘available’ there isn’t a commonly agreed definition, which the FMC identifies as a core problem to address.

It’s a disagreement that derails discussion about other issues. How can a fee be discussed when there isn’t an understanding about it actually is? The FMC urged the task force to determine transparent and standardized language to eliminate confusion.

The report found there was common ground for a mutual understanding on billing practices and dispute resolution.

Ocean carriers and terminal operators agreed there were ways to increase clarity and accessibility on billing because tariffs can be difficult to understand. They also agreed dispute resolution processes can be improved upon, including clear instructions on whom to call to initiate a claim. They also conceded it could provide better guidance into what evidence would help resolve disagreements.

The details are where the sides diverge, such as what qualifies as a legitimate reason to waive a fee.

Dye urged the teams to develop commercially viable solutions for each issue. The members would not necessarily need to reach a consensus, but Dye believes they can uncover workable solutions.

Dye expressed confidence that members will be able to compromise and develop actionable items to solve the concerns plaguing cargo owners and trucking companies.