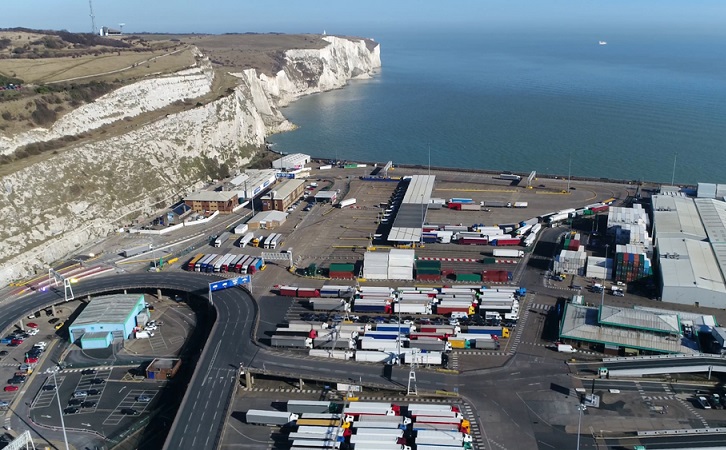 Above: Where the impact of a no-deal Brexit will likely be first seen and felt — the port of Dover is a key player in UK-EU trade and the point where 10,000 of the 14,000 daily trucks cross the border. Photo credit: Shutterstock.com.

With 14,000 trucks crossing the UK-EU border every day and 53 percent of UK imports originating in Europe, shippers and logistics service providers are planning for the consequences of lengthy delays at border points should negotiations between Brussels and London on the UK’s withdrawal from the 28-nation bloc not end in a deal.

Supply chains will have to adapt

Detlef Trefzger, CEO of Kuehne + Nagel, said supply chains would have to be adapted for Brexit. “Our customers have started to build up inventory in the UK and are asking us for six to 12 months of additional capacity to build up a buffer until they have a better idea of what the impact will be,” he told JOC.com.

“CFOs [chief financial officers] don’t like to build up inventory because of the costs, but they need to be prepared. We are seeing that in the hi-tech, automotive, and aerospace industries.”

Felix Heger, head of ocean freight Europe and China rail at DHL Global Forwarding, said his operation was gearing up to provide additional resources for customs on the UK side, but with everything so unclear it was very difficult to prepare.

It is not only British shippers and transporters that are being impacted by uncertainty over the outcome of the negotiations. “Shippers and logistics operators all over Europe and globally are spending time and money analyzing the possible consequences of Brexit: congestion at ports, impact on transshipment operations, and new barriers to trade,” according to the European Shippers’ Council.

“Contingency plans can be made, but each one is very time-consuming to develop, and in the current climate of uncertainty there could be many scenarios that need to be considered,” the council said.

Since the United Kingdom voted to leave the European Union almost two years ago, this lack of clarity in how the United Kingdom will exist outside the single customs union has prevailed and is frustrating those in the cargo transport business.

Shippers at JOC’s Container Trade Europe conference in Hamburg last week (Sept. 18 to 20) said the uncertainty was making it incredibly difficult to plan for next year. The supply chain manager for a global sporting goods retailer said, “We are discussing scenarios internally and trying to find ways to ensure there are no stock-outs in the UK after March 2019. But it is very worrying and there is no clear and obvious way forward.”

The planning challenges were reflected in findings by research company Gartner, where 40 percent of those polled said they were looking to replace their European suppliers, 63 percent of EU businesses that work with UK suppliers expected to move some part of their supply chain out of the United Kingdom, and 20 percent of respondents said they were struggling to secure contracts with suppliers after March 2019.

Tom Enright, research director at Gartner, said UK companies needed to start talking to alternative suppliers now before competitors took up all the available capacity. He told the Gartner Supply Chain Executive Conference in London that companies should begin educating their customers on the need for higher prices as Brexit imposed additional costs on their supply chains.

In the long term, this shift in production would be unavoidable, warned Trefzger. “Forwarders are agile and adaptive, but manufacturers will need to find the right suppliers in the right locations, and that takes time. There will be additional logistics and inventory costs to importers, exporters, and wholesalers, and it will be paid for by the end consumer,” he said.

The transport sector faces a mountain of challenges with the UK’s exit from the EU customs union and its single market set for March 29, 2019. Of particular concern to the transport industry is if the United Kingdom leaves with a “no-deal Brexit” that would require a massive customs effort to ensure the continued and smooth flow of cargo.

The port of Dover is a key player in UK-EU trade and the point where 10,000 of the 14,000 daily trucks cross the border. There are already significant bottlenecks, and if customs checks — no matter how efficient — are required by a no-deal Brexit that pushes the United Kingdom out of the single customs union, it will quickly create enormous backlogs. In addition to the daily truck volume that would need to be cleared, 1.4 million trucks a year are also transported on rail shuttles at the nearby subsea Eurotunnel.

In a series of technical papers published in early September, the UK government provided no answers, advising shippers that if the huge traffic jams occurred, they should consider employing the “services of a customs broker, freight forwarder or logistics provider to help, or alternatively secure the appropriate software and authorizations.”