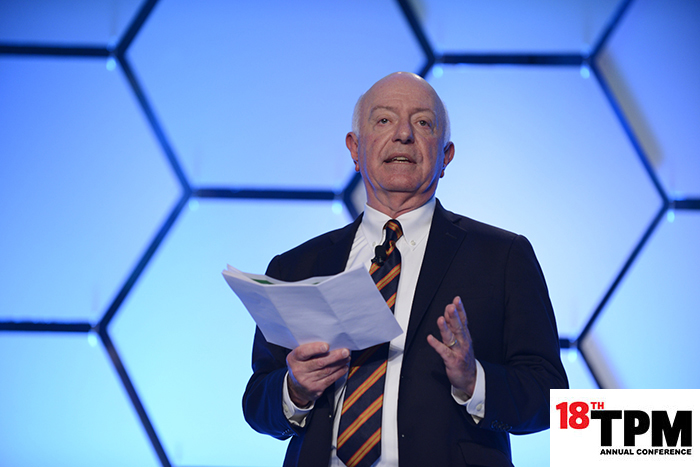 LONG BEACH, California — Economies around the world are enjoying the kind of expansion they have not seen in more than decade, but uncertainty surrounding the potential for protectionist trade wars and fiscal policies threaten their trajectory, Dr. Nariman Behravesh, IHS Markit chief economist, said Monday at the 2018 TPM Conference.

The global economy is on track toward 3.5 percent growth in 2018 and 2019, Behravesh said, as expansion becomes more broad-based, encompassing emerging and developed economies.

IHS Markit expects world trade volumes to grow 5 percent this year, up from 2.5 percent in recent years. “It’s not quite the boom rates of the 1990s, but it’s certainly better,” he said.

In the United States, the benefits of the 2017 Tax Cuts and Jobs Act and stimulus spending will fuel greater economic expansion, Behravesh said, pushing annual real GDP growth to about 3 percent in 2018 and 2019. The US average unemployment rate, now at 4.1 percent, will drop closer to 3 percent, its lowest level since the Korean War, Behravesh said.

That is good news, but how long the current US economic expansion, which began in June 2009, lasts may depend on how policymakers and businesses react to faster growth. As unemployment drops to new lows, “inflation will start to rise, which, in turn, means the Federal Reserve will have to hike rates more than the market is expecting,” Behravesh said.

And that, he said, is how most economic expansions historically have ended.

“Expansions don’t die of old age, they get killed off,” Behravesh said. “We could be headed for a boom-bust cycle. You could see inflation going higher than 3 percent and the Fed stepping very hard on the brakes. Traditionally, it’s been the Fed that’s killed off US expansions, and monetary policy could kill off this recovery. We give it a 1-in-3 chance of occurring,” he said.

Right now, the US and global economies have legs, Behravesh said, but a trade war could cut off their growth at the knees. “Trade wars are not a good thing or easy to win,” he said, paraphrasing and reversing President Donald Trump’s tweet related to a potential trade war stemming from proposed steel and aluminum tariffs. They are a terrible thing and impossible to win.

“If we really go down the path of Smoot-Hawley,” the 1930 law that raised tariffs on 20,000 goods and deepened the Great Depression, “it could be a disaster for us and our trading partners,” he said. “There is this view in Washington that trade is a zero-sum game. Not only does economic theory say it’s a positive-sum game, but study after study shows it.”

If the US economy recovery manages to sail past these twin threats, it could become the longest economic expansion in US history, he said, lasting into late 2019 or 2020.

“The dilemma and the challenge is that we haven’t done anywhere near enough to help people hurt by trade, those I call the left-behinds.” Behravesh said. “These are people who feel totally betrayed by globalization, who believe globalization has hurt and not helped them. But they are in a minority. More people have gained from trade than have lost from trade,” he said.

This is not just a US problem. Behravesh pointed to Brexit as a drag on the British economy, and Sunday’s elections in Italy, in which two “Eurosceptic,” populist parties won a majority of votes. That could affect Europe’s economic expansion, he warned. “It’s a risk for Europe, it’s a risk for Italy, and it’s a step back for Italy and its potential,” he said.

"This global and US recovery has legs, and left to its own devices, it could be sustained at least through 2019, maybe into 2020,” Behravesh said.