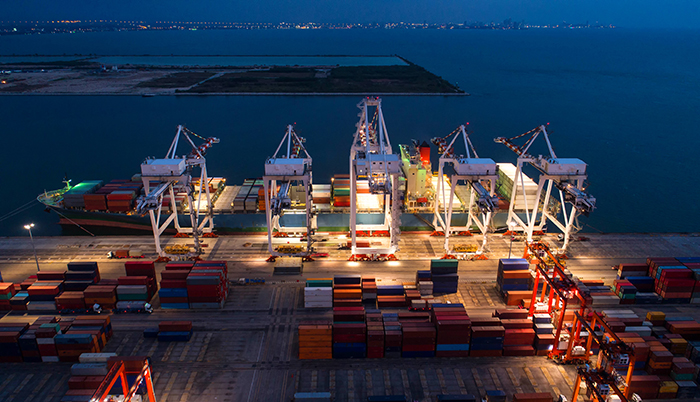 Japan's export growth is expected to slow as imports expand at a faster rate.

Nittsu Research Institute and Consulting Inc. (NRIC) has revised upward its outlook for Japan’s container trade in fiscal year 2017, which started on April 1, citing faster growth in exports and imports than previously thought.

Japan’s container trade will expand 2.6 percent year over year to 12.3 million TEU, the Tokyo-based research firm predicted in a new report. The pace of growth in fiscal 2017 had previously been estimated at 2 percent.

Growth in fiscal 2017 will accelerate from fiscal 2016, when Japan’s container trade is estimated to have risen 2.3 percent year over year to 12 million TEU, NRIC said.

It will be the second consecutive annual increase after Japan’s container trade shrank 2.6 percent in fiscal 2015 from a year earlier to 11.7 TEU amid slumping exports and imports.

Exports and imports in fiscal 2017 had previously been estimated to grow 1.7 percent and 2.3 percent, respectively.

NRIC said that exports will climb in fiscal 2017 due to moderate economic growth in developed countries and emerging markets. But NRIC warned that although exports to the rest of Asia, including China, will remain brisk, those to the United States and Europe could lose steam owing to a possible rise of protectionism there and the yen’s strengthening against the US dollar and the euro. The yen will appreciate from its current value of 112.4 per US dollar to 114.6 yen per dollar by the end of the year, according to IHS Markit, which expects Japan’s GDP to increase 1.3 percent this year.

The United States retained its status as Japan’s biggest export market for the fourth straight year in 2016, as rival China saw its economy continue to slow down. But China remained by far the biggest source of Japanese imports in 2016. US imports from Japan rose 1.9 percent year over year last year to 642,734 TEU, according to PIERS, a sister unit of JOC.com. Through the first half, US imports from Japan are down 0.2 percent to 318,974 TEU.

NRIC said that imports will rise in fiscal 2017 on the back of firm consumer spending and corporate capital investment as well as the yen’s rising trend.

Consumer spending and corporate capital investment are two major engines of economic growth, and imports of consumer goods will remain strong, and those of machinery and equipment will be firm, NRIC predicted.

Canada Trade and Shipping Outlook
TPM22: What We Learned — Container Shipping in the Crosshairs
Managing E-Commerce From Order to Delivery and Beyond
END_OF_DOCUMENT_TOKEN_TO_BE_REPLACED