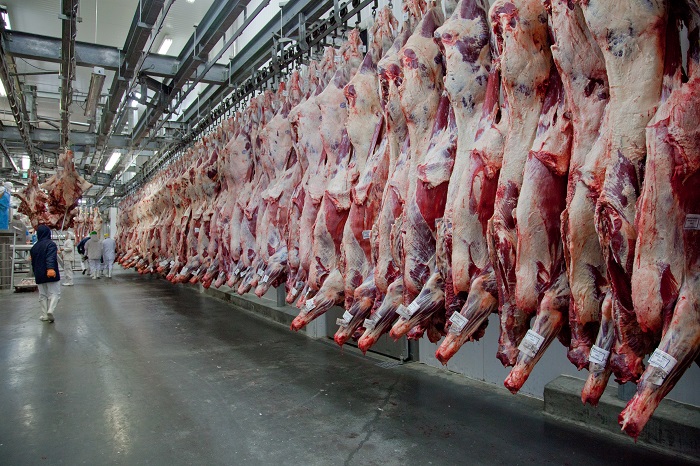 Almost immediately after President-elect Bolsonaro’s announcement, Egypt cancelled a trade mission from Brazil that had been scheduled to promote exports, such as beef, chicken, and various fruits. Photo credit: Brazilian Exporters Association.

Brazilian exporters could suffer a substantial reduction in business from importer Arab nations, if Brazilian President-elect Jair Bolsonaro goes ahead with his plan to move Brazil’s embassy from Tel Aviv to Jerusalem.

For carriers such as Maersk Line, CMA CGM, and Hapag Lloyd, the Middle East preference for Brazil’s halal meat is also a money generator, as these cuts are more expensive than standard cuts.

Almost immediately after Bolsonaro’s announcement, Egypt canceled a trade mission from Brazil that had been scheduled to promote exports, such as beef, chicken, and various fruits.

Shippers of sugar, coffee, soybeans, iron ore, and corn also could be adversely affected, but the sectors that will be hardest hit will be meat exports, especially Brazilian beef, which is very popular with several Arab nations, and especially Egypt and Iran, and involves about 55,000 TEU per year.

A few days after the election, Bolsonaro vowed to move the embassy to Jerusalem, just as his ideological inspiration, US President Donald Trump, did earlier.

The Brazilian Integrated Foreign Trade System (Siscomex), which is used by the Brazilian Ministry of Foreign Affairs to register import and export merchandise, indicated that the 22 Arab countries are the fifth-largest destination for all Brazil exports, and they bought about $10 billion in goods in the January-September 2018 period.

“On top of this, Brazil has a trade deficit with only four of the 22 Arab countries: Algeria, Morocco, Saudi Arabia, and Qatar,” said one line manager for one of the big four carriers, “and several carriers are strong in terms of reefer cargo to the Middle East, especially halal-treated meat. This could end up being a serious problem and it would be a pity because Brazilian trade associations have worked very hard to develop these lucrative markets for the long term.”

The overall reefer market for beef alone from Brazil to the Arab nations is about 55,000 TEU annually, and chicken is at a similar level.

During the first quarter, Egypt imported 55,515 metric tons of Brazilian beef, worth $164.4 million, up an astounding 269 percent from 15,033 metric tons imported during the same period in 2017, and that places Egypt third among global meat buyers. Iran is fifth, at 23,838 metric tons, down 31 percent on last year. Saudi Arabia, the United Arab Emirates, the Palestinian Territories, and Iraq also import considerable volumes of Brazil’s beef.

Welber Oliveira Barral, a director for Barral M. Jorge consultancy and a former foreign trade secretary for the Brazilian government (2007-2011), told journalists in Brasilia that the embassy move could jeopardize Brazil’s growing sales to the Middle East.

“Brazil is the biggest beef exporter in the world and any reductions in its growing exports to Egypt would be a serious blow to leading companies like BR Foods, JBS, Minerva, and Marfrig so we hope common sense prevails,” Barral said. "I do not believe in breaking diplomatic and commercial relations, but [Arab nations] may in the future prefer other Brazilian competitors, not certify new Brazilian plants for halal slaughtering, or maybe not renew certification for certain Brazilian exporters.”

What’s more, coffee exports are also likely to be affected. During the first 10 months of 2018, Brazil exported about 1,252,104 60-kilo sacks (1,252,104 132-pound sacks) of coffee to Arab countries, up 14 percent over the same period of last year. These shipments could also come under threat, if Bolsonaro goes through with his Jerusalem policy, said one Santos-based shipper, who spoke on condition he not be identified.