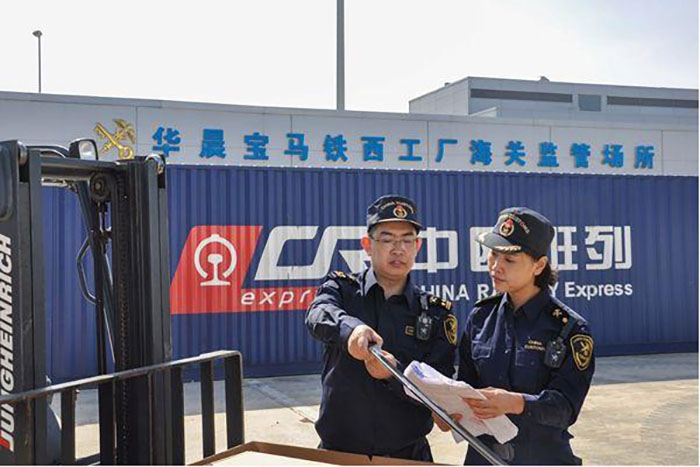 Chinese customs officials have stepped up inspections of US exports across a wide range of commodities. Photo credit: People's Republic of China General Administration of Customs.

China is increasing pressure on US exporters of waste, pork, and fresh fruits as the May 11 deadline for public comment on proposed US tariffs on $50 billion worth of goods draws near and after a team from the Trump Administration returned home from negotiations in China empty handed.

While the sectors targeted are diverse, the tool used to squeeze US exporters is the same — ramped-up container inspection. The resulting delays and uncertainty come after China slapped US fruit and pork with tariffs in retaliation for US tariffs on steel and aluminum.

The steps taken to target US waste have been the most dramatic, as China will not accept any waste at all from the United States in the month of May after China’s General Customs Administration said that it would not allow CCIC North America to issue waste inspection certifications, according to the Institute of Scrap Recycling Industries (ISRI). CCIC is the only entity licensed to perform such inspections, resulting in a de facto ban on US exports of waste to China. The government said the ban will stay in place until June 4 and was motivated by ensuring that CCIC inspections are up to standards.

Waste, led by wastepaper, is the largest US export commodity, and the US exported 94,630 TEU of all kinds of waste in May of last year, according to data from PIERS, a sister product of JOC.com within IHS Markit. US exports of all waste to China fell 16 percent in 2017 to 978,982 TEU.

The month-long ban comes as China clamps down on imports of waste generally, and just weeks after China announced an expansion of its ban on waste imports that was announced over the summer of 2017.

More than waste at stake

China has stepped up inspections of pork products, the Meat Export Federation confirmed to JOC.com, saying that it does not have information on shipment delays but that it is seeking information on this matter from its members. Reuters first broke the news of the pork inspections.

Lumber exporters have told JOC.com that an abrupt April 27 change in fumigation requirements has led to China rejecting all shipments of US lumber, with more than 25,000 FEU en route to China as 5,701 FEU languish in Chinese ports.

In addition, China has targeted fruit shipments for greater scrutiny, particularly apples and citrus, according to Peter Friedmann, executive director of the Agriculture Transportation Coalition, who said it is unclear if there is a relationship between China-US trade tensions and the inspections.

“Some might think there’s a correlation, however, it is not entirely clear that is the case,” he told JOC.com. “This is not something new, and this has happened periodically for these exact fresh fruit products.”

Those volumes will likely continue to fall, as the inspections are leading Chinese buyers to shun US fruit because of the risk that it could spoil during the inspection process.

“This is the uncertainty that has been created and it has resulted in less fruit being shipped,” Friedmann said.

The $50 billion in tariffs the US is threatening against China, and China’s list of commodities it would target in retaliation, would impact roughly 887,000 TEU, or 6.6 percent of the total US container trade with China. When the US tariffs on steel and aluminum are taken into consideration along with the Chinese tariffs on pork, fruit, and other goods that have already taken effect are factored in, the potential impact rises to 1.1 million TEU or 7.8 percent of the total US-China container trade.

Canada Trade and Shipping Outlook
TPM22: What We Learned — Container Shipping in the Crosshairs
Managing E-Commerce From Order to Delivery and Beyond
END_OF_DOCUMENT_TOKEN_TO_BE_REPLACED