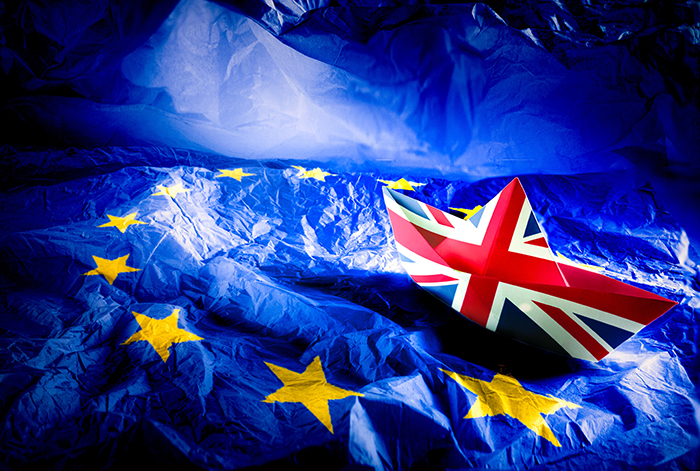 LONDON — The last-minute collapse yesterday of Brexit talks aimed at securing agreement at next week’s crunch EU summit to kick start the second phase of negotiations over trade relations after the United Kingdom leaves the 28 nation bloc has ratcheted up fears across the European transport sector.

The two sides have expressed confidence they can resolve the issue that caused the breakdown of talks — the status of the border between Ireland and Northern Ireland — by the time EU leaders meet in Brussels on December 14 and 15.

The United Kingdom’s top priority is to achieve as seamless as possible trade with its 27 EU partners and nail down a realistic transition period to ease its entry into a post-Brexit environment.

The impact on trade is critically important to the transport operators because the United Kingdom’s split from the European Union and its single market and customs union might slow, or even reduce its imports and exports and consequently demand across the sector — from road and rail to seaports and airports.

However, the industry’s main concern is over the United Kingdom’s ability to have a new IT customs system up and ready by the Brexit divorce scheduled for March 29, 2019, which explains its desire for an extended transition period of between two to three years during which the current free movement regulations will apply before the final cut off.

There’s not much confidence that the government will meet the deadline. It is “bordering on insanity” to believe that new systems will be in place by then, warned Leigh Pomlett, executive director of CEVA Group, the US-owned global logistics company that has a major presence in the United Kingdom with around 5,800 employees and more than 100 sites.

The Brexit fallout has focused on the UK transport sectors as they have most to lose from the country’s departure from the European Union, but their peers in other European countries also face major challenges.

Ireland is threatened with the biggest Brexit hit as around two-thirds of its leading exporters use a border-free UK land bridge of short-sea crossings and the Eurotunnel link to France to ship their products to Europe and beyond.

Ireland’s largest port, Dublin, plans to build new roads and customs check points and will cordon off land to handle the queues of trucks — 400,000 a year cross the Irish Sea — it expects to face in the post-Brexit era.

The southern Irish port of Cork has been seeking new sea connections with ports in northern Spain and western France for customs-free shipments of exports to its European markets.

The Irish government’s demand that there is no hard border with Northern Ireland — the only part of the United Kingdom that shares a land crossing with the European Union — is largely owing to fears it would undermine the 1998 peace treaty that ended 30 years of violent conflict in Northern Ireland that claimed more than 3,000 lives. Although it would also impact trade and transport with some 180,000 trucks freely crossing the 310-mile border every month.

The Netherlands also face high risks from Brexit as the United Kingdom is its second-largest export market, with many of its products shipped from the port of Rotterdam on roll-on, roll-off vessels. The reintroduction of customs checks will have a major impact, with companies like DFDS, a leading north European short-sea shipping line, already talking about dividing its terminal into separate parts.

Other European ports are facing an unknown future, particularly Calais, Zeebrugge, and Dunkirk which rely on the United Kingdom for a sizeable slice of their ro-ro shipping business.

Europe’s transport sectors are in the dark about life after the EU’s third-largest economy leaves the bloc, but they know it’s not going to be easy if there is not an extended transition period after March 2019.

“For a successful outcome of the Brexit negotiations, it is of the utmost importance that road transport movements between the UK and the EU remain seamless,” said Daniel Kern, senior manager Trade Policy Affairs at the International Road Transport Union.

“In order to achieve this, we need a sufficient transition period that safeguards the status quo of road transport movements until a new business friendly agreement between the UK and the EU is implemented,” he told the European Parliament last month.

A majority of British trucking companies favor Brexit and while the Road Haulage Association supports free movement between the United Kingdom and the European Union, it has called for the scrapping of cabotage to prevent foreign truckers, mainly from Eastern Europe, winning domestic contracts at cheap rates on their return journeys back to the European Union.

The rail sector, struggling to protect its market from aggressive road transport rivals, is also nervous about the impact of Brexit, not least because the industry doesn’t rank high on the negotiating agenda as London and Brussels focus almost entirely on trade relations.

Among the rail industry’s top priorities are guaranteed access for UK and EU operators under the same conditions, the free movement of workers, the harmonization of technical rules, and seamless border procedures for rail freight travelling between the UK and Ireland, according to the European Railway and Infrastructure Companies.

While European shipping lines, rail operators, truckers and freight forwarders fret over Brexit, their UK peers are the real victims of their country’s looming divorce from the European Union after 46 years.

The nervousness is underscored by reports that UK firms have been stockpiling goods at close to record levels partly driven by fears Brexit will slow or disrupt their global supply chains. Inventories have been rising for 18 months, with companies over ordering by between 15 to 20 percent, according to consultancy KPMG.

While some of the rush for warehouse space is due to the surge in e-commerce across the United Kingdom, uncertainty over the outcome of the Brexit negotiations is also playing a key role in driving up investments.

However, it’s the port sector — and its customers — that will bear the brunt of the UK’s departure from the EU’s customs union, as its ro-ro hubs, headed by Dover, handle around 40 percent of the country’s imports and exports.

The focus remains on Dover, one of the world’s leading ro-ro ports, which handles up to 10,000 trucks a day that move onto the same roads as the 1.4 million trucks that are transported on train shuttles through the sub-sea Eurotunnel every year.

These stats become scarier if the UK fails to nail down a workable post-Brexit customs deal, secure a realistic transition period, and replace its outdated customs system in time to prevent the guaranteed gridlock that would ensure at Dover and other UK ro-ro ports.

The most widely quoted statistics is that an extra two minutes of customs processing for each truck in Dover would create a 17-mile queue of vehicles waiting to access the ships calling at the port.

Fears of highway gridlock escalated in the summer when the National Audit Office, the UK government’s spending watchdog, said that the planned new customs declaration system, work on which began in 2013, three years before the UK narrowly voted to quit the EU, will not be ready in time for Brexit.

The current system processed around £55 billion ($74 billion) of export and import declarations in 2015-16 and the customs agency expects this to rise to £255 billion when the United Kingdom leaves the European Union.

New checkpoints may have to be built inland to facilitate increased post-Brexit processes as space is limited in some ports, according to Karen Wheeler, director general of borders at the UK’s Revenue and Customs. “As much as possible we would like it to be inland rather than at the port, particularly where ports are constrained,” she told MPs.

It is “not realistic” that the new facilities will be ready by the time the United Kingdom leaves the European Union, but the picture will become clearer in the spring.

Despite a rising flood of apocalyptic warnings, UK companies are trailing some of their EU peers in signing up to a “trusted trader” scheme that might reduce queues following Brexit. Just over 600 British firms have registered as “authorized economic operators”, a tenth of the number of German firms on the scheme, and a fraction of the estimated 130,000 British businesses that will make contact with customs for the first time following Brexit.

The United Kingdom, which relies on trucks to transport 70 percent of its imports from the European Union, is also facing a loss of drivers, who will return to Poland and other East European countries because of Brexit and a feeling of not been welcomed in the United Kingdom. “We cannot recruit at the speed we are losing drivers at the moment,” CEVA’s Leigh Pomlett told a recent Freight Transport Association conference in Dublin.

The coming days will decide whether Europe’s transport sectors can look forward to a relatively calm new year as London and Brussels work to come up with a deal that will trigger the go-ahead for trade and transition negotiations when EU leaders gather in Brussels next week.