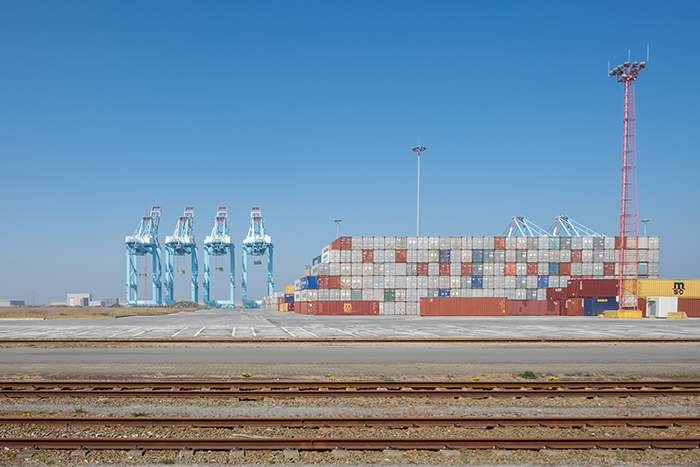 Zeebrugge is an example of the assets that China is seeking to acquire. Photo credit: Shutterstock.


LONDON — Europe is getting a little uneasy about China's surging investment in its strategic sectors, but there is no sign that the spending is about to slow down any time soon.

The 4.5 billion euro ($5.3 billion) acquisition of Kuka AG, a German high-tech robotics manufacturer by Midea, a Chinese home appliances maker, at the beginning of the year sparked fears that Europe’s key technologies are being snapped up by overseas firms while Beijing protects its own companies from foreign takeovers.

The ports sector is also on the radar as Chinese firms snap up container terminals in key European cargo hubs. “If a foreign state-owned company wants to purchase a European harbor, part of our energy infrastructure or a defense technology firm, this should only happen in transparency, with scrutiny and debate. It is a political responsibility to know what is going on in our own backyard,” EC President Jean-Claude Juncker said in a thinly-veiled reference to China in the autumn.

The focus is currently on the EC’s investigation into whether China’s 85 percent financing of a 2.4 billion euro Budapest-Belgrade high-speed rail track, a key plank in Beijing’s One Belt, One Road (OBOR) project, violated EU laws requiring large projects to be put out to public tender.

China’s investment image took another knock last month when Switzerland’s takeover agency accused HNA, one of China’s most high profile private conglomerates, of providing “untrue or incomplete” information about its ownership when it bought Gategroup, an air services company, for 1.4 billion Swiss francs ($1.41 billion) in 2016.

HNA, which started as a domestic airline on the island of Hainan in 1993 and now has assets totaling about $145 billion — the majority overseas, including airports, air cargo carriers, and the world’s third-largest air leasing company — has also attracted the attention of Chinese regulators, which are concerned about the leverage it has built up during its spending spree. Its $2.8 billion acquisition of Swissport, a leading air services company, in 2015 was financed with junk bonds and leveraged loans.

Greece blocked the EU’s planned statement condemning Beijing’s human rights record at the United Nations in June, a move seen as linked to Cosco’s significant investment in the port of Piraeus that has transformed it from a sleepy backwater hub to a major European container transhipment hub in less than a decade.

A month later the European Union had to water down a statement over the rejection by the Court of Arbitration in The Hague regarding Beijing’s claim to sovereignty over a large part of the South China Sea, due to opposition from some of its member states that benefit from Chinese investment, including Greece and Hungary.

Beijing’s "allies" are also seeking to block moves by Germany, France, and Italy to strengthen the EC’s powers to screen and possibly block planned Chinese investments in strategic sectors.

Meanwhile, China is steadily upping its presence in Europe’s maritime industry, particularly its container shipping sector, at sea and on land.

Cosco Shipping, China’s largest container line, knocked Europe’s leading carrier Maersk Line from the top of the traffic table in the third quarter, loading 5.49 million TEU compared with its Danish rival’s 5.26 million TEU, according to industry analyst Alphaliner. Meanwhile, EU anti-trust regulators have just approved Cosco’s $6.3 billion acquisition of Hong Kong-based OOCL — which carried 1.6 million TEU in the third quarter — a transaction widely seen as another step in its bid to overtake Maersk as the world’s biggest container shipping line. And a couple of weeks earlier Cosco’s port unit sealed the 35 million euro acquisition of the controlling stake in APM Terminals, Maersk’s port arm, in the container terminal in the Belgian port of Zeebrugge.

But these industry-changing developments take second place to rolling reports of the launch of each new rail freight service between China and Europe even if it involves fewer than 50 containers on a route — which benefit from generous Beijing subsidies. These operations currently have just one percent of the Asia-Europe container market.

Finland has just launched its first train to China, transporting 41 containers, coupled with claims that the country has the potential to be the Nordic region’s link to the $900 billion OBOR project. And within days, the port of Amsterdam rushed out an announcement that it, too, is making its debut on the route on March 14, 2018.

China’s "intrusion" into Europe is welcomed by the continent’s transport sectors — at least for now — because China’s persistently strong export performance is driving up traffic — if not spot freight rates — on the key Asia-North Europe-Mediterranean routes, and it has also played a key role in Europe’s air freight reaching capacity in the past few weeks for the first time in at least a decade. Chinese involvement has also helped individual European companies and cargo centers that have been facing tough times.

Further, the HNCA group’s acquisition of a 35 percent stake in Luxembourg’s Cargolux in 2014, which had been dumped by Qatar Airways, helped stabilize the leading European all-cargo carrier, by expanding its Chinese footprint, adding a second global hub at Zhengzhou, and putting it in a position to mull buying more freighters next year to bolster its sizeable fleet of 14 747-8Fs and 13 747-400F aircraft.

HNA, one of China’s most aggressive overseas investors, acquired a controlling 82.5 percent stake in Frankfurt-Hahn airport for 15.1 million euros in August, reviving its hopes of becoming a major European freighter hub that were dashed earlier; traffic at the former US Air Force base approximately 75 miles from Frankfurt — Germany’s largest cargo airport — has crashed to just one-third of its peak of 286,000 tonnes in 2011.

Further, even as Cosco Shipping challenges Maersk Line, the two companies’ port arms have built up a strategic partnership with stakes in the Suez Canal Container Terminal, terminals in Qingdao and Guangzhou, and most recently APM Terminals’ deepwater terminal under construction in Vado, Italy. APM Terminals also says it is actively seeking new partnership opportunities with Shanghai International Port Group (SIPG), the operator of the world’s largest container port.

The OBOR also helps “outsiders" with European firms win contracts to supply equipment and finance projects, although Chinese companies hog an estimated 85 percent of the deals and are set to steadily boost their share as they get more tech-savvy.

Still, a Chinese presence is not always welcome, with the port of Hamburg’s decision to award the China Communications Construction Company a contract to build a container berth to handle mega-ships sparking an angry response from local companies, including HHLA, the port’s top terminal operator; HHLA  claimed it would be better to use existing terminal capacity. The Hamburg contract underscored the growing imbalance between Chinese and European terminal operators’ investment in their respective home patches. “China will get a container terminal in Hamburg? When will [a] German operator get majority stake in [a] terminal in China,” Olaf Merk, head of the OECD’s International Transport Forum (ITF), tweeted. Chinese firms control three times as much capacity in Europe as European operators have on the Chinese waterfront, according to the ITF.

Also, some European companies with transport operations are teaming up to thwart the Chinese threat to their business. One example is the recent Franco-German merger of the rail manufacturing arms of Alstom and Siemens as “a dominant player in Asia has changed global market dynamics,” according to Siemens chief executive Joe Kaeser.

Although Chinese firms have snapped up stakes in container terminals from Piraeus and Valencia to Antwerp and Rotterdam, the focus in now shifting to Central and Eastern Europe and the EU’s backdoor in the Balkans nations that are queuing up to join the 28-nation bloc.

Beijing established a 10 billion euro fund last year to help pay for infrastructure projects in the region, and a secretariat for maritime affairs was launched at a meeting in Warsaw in October of the transport ministers of the 16+ — China’s name for the cooperation agreement between Beijing and the 16 countries from the Baltic, the Balkans, and Eastern Europe — 11 of which are members of the European Union and most of the others are lining up to join the bloc.

China’s biggest European project to date is the 360 kilometer (224 mile) high speed rail line between Belgrade and Budapest that will cut the transit time between the Serbian and Hungarian capitals from eight hours to about three hours and eventually link its Central and Eastern European export markets with the port of Piraeus.

But the big money attraction remains in the EU’s richer members and Greece, a key OBOR hub, with Beijing’s pledge to invest 10 billion euros in infrastructure in Eastern Europe yet to take off.

China is planning to expand its Greek transport footprint beyond Piraeus with reports it is mulling investments in the industrial port of Elefsina, a logistics hub that also includes the country’s second-largest shipyard. Cosco is said to be interested in the privatization of Alexandroupoli, which plans to construct an LNG terminal targeting the Balkans market.

Meanwhile, ship finance is rapidly swinging to China as European banks junk their piles of non-performing loans. Germany’s HSH Nordbank, which boasted a 30 billion euro shipping portfolio in 2010 and has been kept afloat by a 10 billion euro state guarantee, is likely to fetch less than $300 million when it is sold ahead of a February 2018 deadline set by the European Commission.

In addition, the rapid rise of Chinese leasing firms, which invested close to $12 billion in 2016, has raised concerns they are financing ships with high gearing that are not needed and are driving up overcapacity.

China has also muscled into the aviation market and is set to bag more than one-third of the $261 billion aircraft leasing market by 2022, up from just 5 percent in 2008, according to FlightGlobal, a data analyst. And it is on track to oust the United States as the world’s largest aviation market by 2022, according to the International Air Transport Association, two years earlier than the industry body’s forecast in 2016.

Meanwhile, Beijing’s crackdown on surging foreign investment, particularly offshore funded acquisitions, that were draining the country’s foreign exchange reserves, has had an impact — non-financial overseas investment plunged 40.9 percent in the first 10 months of the year to $86.3 billion, according to the Ministry of Commerce.

HNA is reported to have put its merger and acquisition activity on hold and might sell some assets as it switches its attention to Beijing’s pet OBOR project. But its latest deal in November — the $305 million acquisition of the cool chain logistics business of Australia’s Automotive Holdings Group — could not be further away.

Still, the investment restrictions that have been tightened through the year are unlikely to impact state-owned firms, so Cosco, SIPG, and China Merchants Port Holdings could still be targeting more acquisitions along Europe’s waterfront and across its hinterland multi-modal hubs into the new year.

And although European container terminal operators such as APM Terminals are slowing their investments as margins tighten, their Chinese peers are looking to boost capacity. “The Chinese players are more comfortable with risk than the established international operators right now, and have a geopolitical strategy rather than a purely financial one,” according to Neil Davidson, senior ports/terminals analyst for Drewry Shipping Consultants.

And there could be more to come, with suggestions that China’s rising wages will push it to build a manufacturing base in Europe to serve its continental market and to ship its exports to Mediterranean, North Africa, and Middle East markets on its container lines, calling at its southern European terminals.