Tariffs deliver another blow to falling US recyclable exports

Tariffs deliver another blow to falling US recyclable exports 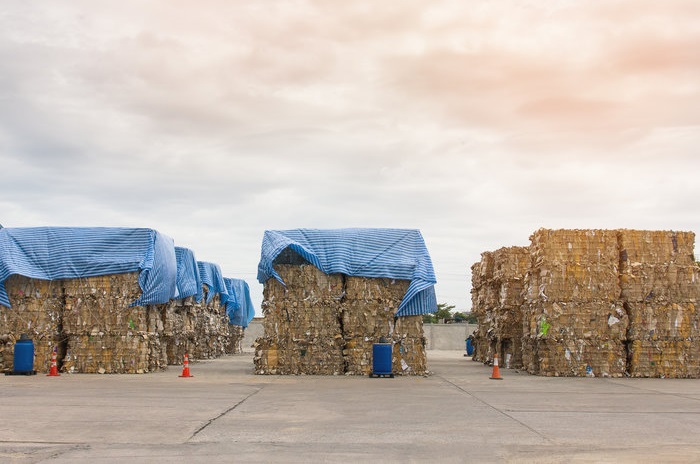 “Paper is looking for new homes, but you can’t replace a market the size of China,” said Nick Halper, director of exports at the Paper Tigers, which is seeking to retain market share by shipping high-quality wastepaper to China. “What we ship is clean enough to go there.” Photo credit: Shutterstock.com.

US exports of containerized scrap paper, plastics, metals, and other recyclables subject to China's waste ban have plunged 26.6 percent this year and there’s little sign that the freefall will let up.

Containerized exports of recyclables, first hit by China's Jan. 1 tightening of environmental restrictions, were dealt another shot by the imposition of a 25 percent tariff in late August — something that will be felt in the months ahead. Futher, despite making impressive gains in India, Vietnam, Indonesia, and South Korea, those newer markets, although important, are much smaller than China.

“Paper is looking for new homes, but you can’t replace a market the size of China,” said Nick Halper, director of exports at the Paper Tigers, which is seeking to retain market share by shipping high-quality wastepaper to China. “What we ship is clean enough to go there.”

Recyclables of all kinds, which are used in the manufacturing process, as a commodity group are the largest export category in liner shipping exports. Therefore, a double-digit decline in exports is a major hit not only to recyclers, but also to the shipping lines that carry the export commodities and the ports through which they move.

China in 2013 announced its Green Fence policy, which is intended to prevent the importation of adulterated scrap products of all types. Mixing large amounts of polluted product in with usable recyclables not only reduces the value of the scrap for use in manufacturing, but is also quite harmful to the environment.

While the Green Fence policy, which applies to imports from all countries, not just the US, has resulted in shipments of much cleaner recyclables, environmentalism is only one of China’s goals in restricting imports. China in the coming years intends to source as much of its recyclables as possible domestically, with the end game being 100 percent domestic sourcing.

On the other hand, US exporters stepped up quicker than their competitors in other countries to meet China’s Green Fence requirements, and since China still has to import the product to meet its manufacturing needs, US producers are able to maintain market share, said Ed Zaninelli, president of Griffin Creek Consulting and former director of exports at OOCL. Halper agreed, saying the Paper Tigers continues to export wastepaper to China, although the volumes are not growing like they used to.

US wastepaper is the cleanest in the world, said Adina Renee Adler, senior director of international relations at the Institute of Scrap Recycling Industries (ISRI). However, that advantage is under attack, due to the 25 percent tariff that China levied on US scrap paper, plastics, and some metals in retaliation for the Trump administration's tariffs on merchandise imports from China. The tariffs actually resulted in a doubling of scrap paper exports in August from July to get ahead of the September tariff, but when the September numbers come in, they will probably show a decline, she said. The September report for aluminum scrap will probably be even more dismal as that tariff increased from 25 percent to 50 percent, she said.

Scrap plastics, especially polyethylene terephthalate (PET) plastics, is another hard-hit category, ISRI stated in its Oct. 1 newsletter, because China has by far the largest share of PET processing infrastructure in Asia. Although some processing capacity is expected to migrate to Southeast Asia, those nations normally look to China as their model, so they are expected to enforce the same quality requirements, ISRI stated.

US scrap exporters looking for new markets in Southeast Asia and the Indian subcontinent will have to contend with transportation capacity issues because shipping services to those countries are not nearly as extensive as to China, Halper said. Also, since there are fewer services, ship capacity fills quickly and ocean freight rates will be higher, he said.

The gains to other markets, while small in absolute terms, will be large in percentage terms. Recyclable exports banned by China in January-July this year versus last year increased 161.9 percent to India, 179.6 percent to Vietnam, 288.1 percent to Indonesia, and 17.9 percent to South Korea, according to PIERS. Similarly, exports to Europe and the Middle East also showed impressive percentage gains, but on a much smaller base, in terms of TEU/tons, than China and other Asian nations.