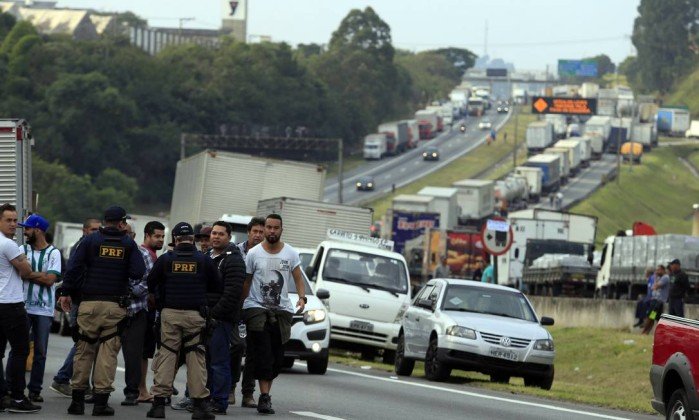 One person was killed during the Brazil truckers' strike, which also resulted in hundreds of millions of dollars in cargo damages, mainly foodstuffs and meat, along with widespread cargo delays. (Above: The truckers' blockade on the Regis Bittencourt Highway near São Paulo earlier this week.) Photo credit: Abcam.

The disruption and losses inflicted on Brazil’s ports and sectors by the truck drivers’ strike and blockade — in which one truck driver was killed, cargo lost, and goods tranport delayed natonwide — means it will take at least 10 days before some kind of 'normal' can return to Brazil, several sources told JOC.com.

Although the dispute has been resolved and most striking/blockading truckers have retuned to work, following a directive from Abcam, the main union for autonomous truck drivers, there are still some pockets of protest.

As noted, the large job action led to one death, when a truck driver trying to escape from a roadblock in Ponta Porã was hit and killed by a rock thrown by a protesting truck driver. Federal police have arrested an adult male suspect.

For shippers, the encouraging news is that late Thursday night, the blockade at the key Port of Santos ended and truckers said they would expedite cargo, now that diesel prices reflected the 0.46 reais per liter (45 cents per gallon) reduction that the Temer administration had promised earlier in the week.

The heavy presence of armed forces in Santos no doubt also helped nudge the final truckers away from the blockades and back to work.

What’s more, the Temer administration agreed to just about every Abcam trucker demand, including the aforementioned diesel price reduction for 60 days, the establishment of a minimum freight rate for truckers on all government-associated contracts, and a toll exemption for empty trucks on federal, state, and municipal highways.

However, as several expert Brazil watchers and executives indicated, the 60-day diesel price reduction will cost Brazil at least 10 billion reais ($2.67 billion), hence it transfers this obligation from truckers to the broader society.

Robert Grantham, a consultant for Solve Shipping based in Navegantes, experienced the strike’s effects first hand, suffering food and fuel shortages and witnessing the Itajai port complex fishing fleet trying to blockade the entrance to the harbor, before Brazil Navy ships escorted them out of harm’s way. In Santos, the 200-strong fishing fleet tried the same with same end result.

“Bringing the country to a standstill for 10 days has been an absolute disaster for the economy and it will take months before the supply chain gets back to normal. One of the main problems is that this government is extremely weak,” Grantham said. “And our law decrees that if you take away a tax you must replace it with something else, so now the subsidies to help exporters have been taken away.”

Grantham doesn’t think removing the export subsidy will be too big of a burden for exporters on account of the real weakening against the dollar, but the Association of Brazilian Exporters (AEB) disagreed. AEB president José Augusto de Castro said the withdrawal of the exporter incentive is a setback for Brazil’s global trade, represents a breach of contract, and therefore AEB could oppose it through the courts.

“The exporter has signed a contract based on a rule of the game that is changed during the match. So this creates legal uncertainty. Of course, if I wanted to go to court, I certainly would have won because the rules of the game had changed. But the measure is bad on all counts, as it signals a lack of support for exports,” de Castro said.

Although a truckers’ strike alone is enough to slow if not stop the transport of goods, an earlier job action by another group magnified its impact. The ongoing three-days-per-week job action by the Receita Federal (Customs Officers) had delayed container cargo before the roughly 300,000-trucker strike.

“Things are beginning to move in the right direction with nearly all the truckers agreeing to return to work,” said one shipping agent based in Santos, the country’s leading port. “But there is still a long, long way to go before we get back to something like normal operations. The country is still dealing with the fall out from the strike, and the container terminals are extremely congested. It is gonna be a mess for some weeks to come.”

“One of the problems after five days or so of blockades is that feedstuffs were not getting through to the farms and Brazil’s agri-business is one of the biggest in the world and brings in a lot of revenue through our exports,” Filho sad. “Our livestock is at risk, many chicks have been slaughtered, there is no corn for our pigs, and we are now facing shortages of eggs, milk, etc. … It will take weeks to recover.”

Antonio Jorge Camardelli, president of Abiec, the Brazilian beef exporters association, agreed with Filho and said that more than 120 meatpacking plants closed for several days during the dispute and in one week had lost 40,000 metric tons (44,092 tons) of exports worth $140 million. Much meat in transit had spoiled and therefore had to be discarded.

Blairo Maggi, Brazil’s agriculture minister, added that with 1,400 trucks on the road with beef and chicken at any given moment and thousands more transporting foodstuffs, the loss of perishables will also be in the millions of dollars.

Automobile makers and exports have also been hurt by the roughly 11-day truckers' strike.

Anfavea, the Brazil Association for Car Manufacturing, said that Brazil’s entire auto production ceased last Monday and would only restart Monday, June 4. That will cost Brazil about 250 million reais per day in lost tax revenue, with about 20,000 fewer vehicles exported in May. He added that the 800,000-vehicle export forecast for 2018 would now not be met.

Decarbonization must remain a priority despite supply chain issues