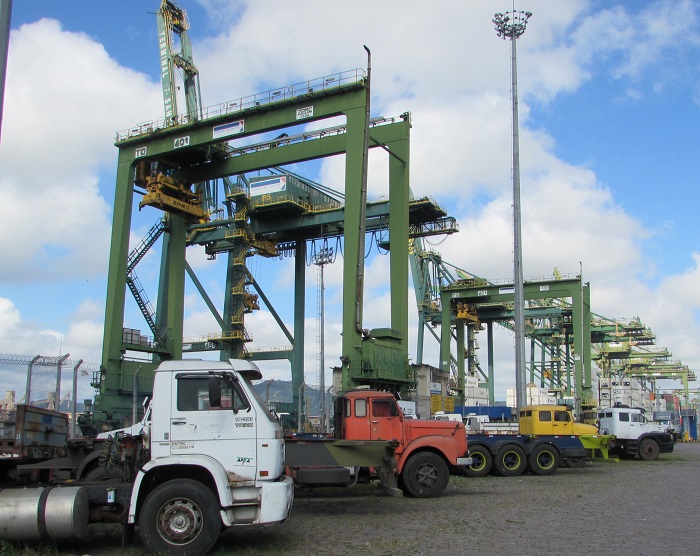 Trucks parked at the Port of Santos, waiting for cargo. A customs officers' strike has delayed the transport of container cargo at the port by up to 14 days. Photo credit: Rob Ward.

Shippers are starting to suffer major delays again at the Port of Santos, and at other locations in Brazil, as fiscal auditors with the Receita Federal (customs office) this week stepped up their strike — after failing to resolve a pay and benefits dispute with the Brazil government that started in November.

Sindifisco, the customs officers’ trade union, initiated a 24-hour strike Thursday at 10:40 a.m. local time (11:40 a.m. EDT). Sindifisco had already deployed the Operacao Maré Vermelha, or “Operation Red Tide” from April 1 to 7 — an action that escalated the once or twice per week “go slows” into an all-day “work to rule,” whereby every import container is physically inspected, rather than just a small percentage.

Several sources have indicated that for every day Receita Federal remains on strike, Brazil loses 100 million reias ($29.5 million) in tax revenue, and the transportation of 2,000 to 3,000 containers is delayed — left waiting for clearance.

Further, some containers are now being retained in various Santos customs areas for up to 14 days, and this could soon increase to nearly 21 days, according to Jose Roque, executive president of Sindamar, the Shipagents Association for Santos and the state of São Paulo.

At the Paraguay border at Ponta Porã, about 320 kilometers (199 miles) from Campo Grande, state capital of Mato Grosso, hundreds of trucks have been delayed up to a week.

Also, in Rio de Janeiro and other Brazilian ports, delays of a similar duration have been reported.

Roque said officers in the tax analysts section and the tax auditors section of the Receita Federal of Brazil Thursday participated in the strike.

“This, along with the accelerated actions of last week, is causing delays that will lead to higher storage costs and higher prices for consumers in Brazil, which is all of us,” Roque told JOc.com.

Further, the delays are starting to hurt shippers — especially importers of auto parts, leather goods, plus electronic consumer goods and components — as well as beef exporters — both of which are incurring additional port warehousing costs.

One maritime consultant, who spoke on condition of anonymity, said President Michel Temer’s reduced leverage, as a result of political scandal investigations, has lengthened the dispute.

“President Michel Temer is under pressure in Brasilia, owing to a number of corruption scandals [including the recent Operation Skala, and the long-running Lava Jato investigation], so he has been unable to carry through his pension reforms, including ones reducing the privileges of public workers such as the customs officers,” he said. “This has made his position weaker and also strengthened the hand of the Sindifisco union … so they are now emboldened to strike for longer periods with more categories joining in at the same time. I have been saying for some time now that port users and shippers can handle the ‘go slows’ and ‘work to rules’ but cannot handle the concerted strike actions such as we are seeing this week.”

He added that with Brazil's economy finally in a sustained expansion after a long recession, “it is very sad to see it blighted by these irresponsible actions.”

About 18 months ago, Brasilia agreed to renew existing pension terms, including a pay increase, for Sindifisco members, but the Temer administration then delayed implementation because of its policy goal of reducing Brazil’s state employee expenses. Brazil’s tax revenue can no longer meet the cost of the nation’s very generous pension plan, economists and public policy analysts generally agree.

As of Friday, no new talks between customs personnel and Temer administration officials have been scheduled. Sindifisco officials indicated they will meet next week to determine their step/action.