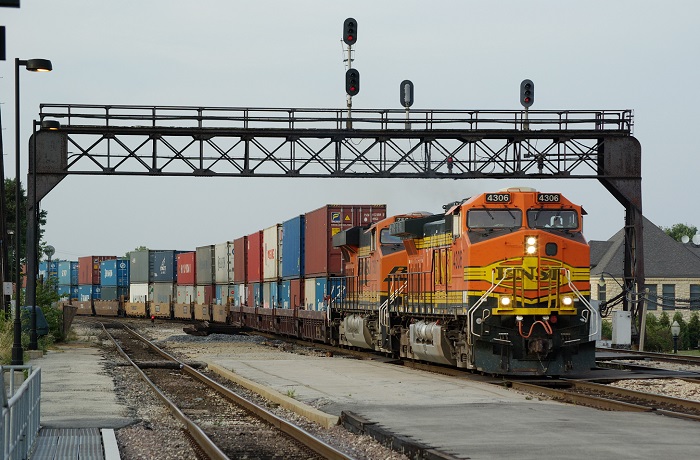 If the first half of 2018 was a bellwether, beneficial cargo owners will face unprecedented challenges using intermodal this peak season, which appears to be starting earlier than in prior years.

Intermodal traffic rose 7 percent in the first five months of the year, according to the Intermodal Association of North America. The number of 40-foot containers moving on the rails rose 7 percent, while 53-foot containers increased 6.4 percent and trailer-on-flatcar shipments jumped 17 percent. In the past five years, overall intermodal volume grew 12 percent; domestic business increased 20 percent.

Much of the upswing in this year’s domestic intermodal has been tied to the US electronic logging device (ELD) mandate. As truckload capacity tightened to record levels, shippers have turned to rail to get goods off port docks. Because truck drivers can no longer use paper log books, making trips longer in many respects and forcing some drivers to leave the industry, some regional drays from ports have transferred to intermodal hauls.

Intermodal marketing companies (IMCs) and truckers are warning cargo owners that this peak season will be as tight as ever, and the last minute, or 11th hour, appears to be now, and not in August.

Domestic intermodal might be heading toward the same scorching temperatures any heatwave can bring. Union Pacific Railroad is booked up on contracts out of Southern California for the rest of the year, the company told JOC.com. Although UP hasn’t made other announcements, it’s likely that more markets will be locked up soon, with surcharges possibly on the horizon for excess freight beyond contractual allotments.

UP has already dealt with challenges at the Port of Los Angeles, particularly near Yusen Terminals because of the recent consolidation of three Japanese container carriers — “K” Line, NYK Line, and MOL — to establish the Ocean Network Express (ONE). The three former lines each still have their own proprietary terminals in Los Angeles-Long Beach, although many of the combined services under ONE now call at the Yusen terminal in Los Angeles.

Phil Shook, intermodal director for C.H. Robinson, said there will be very few trucks or domestic containers available in Southern California through October or November.

“While this is earlier than usual, I think we all planned for this tightness, which is why you saw the announcement from [UP]. Other large capacity providers are taking a similar approach, though they may not be as public about it,” he said. “The bigger concern I have is the tightness in some of the secondary markets such as Dallas, Houston, Atlanta, and Memphis. Dallas and Houston are normally points of surplus container capacity, which can be used to generate empties into Southern California. If these secondary markets are tight, it reduces the number of relief valves for Los Angeles.”

Perhaps not surprisingly, finding a truck to haul a 53-foot container in Los Angeles is difficult right now.

“You have an ocean box, you’ll find five or six draymen able to take it out today. You have a 53-foot box out of UP, it’ll take two days to get a driver,” said Jason Hilsenbeck, founder of LoadMatch and Drayage.com, an intermodal directory and container-matching service in the Chicago area.

Doug Hoehn, executive vice president of Milestone Equipment Holdings, said his company finalized its last contract for a 53-foot container, so any future transactions would have to be on a first-come, first-served basis.

“We have a peak season fleet [4,000-5,000 boxes], and then there is a couple thousand containers on top of that. They are all booked up,” Hoehn said, “Last year we went into late August or early September before our last containers were locked up, so this is very early.”

He likened the current situation to a jam-packed garage. A parking space (container) may open briefly and it will be a tussle over who gets it first.

Garry Old, president of COFC Logistics, agreed that while he might be able to accommodate a few containers in Los Angeles; Stockton, California; Chicago; and Memphis, Tennessee, he has booked nearly all of his peak commitments with IMCs.

“Many of our boxes are controlled with a street turn [when an IMC will use the same container for back-to-back jobs]. In Los Angeles, Stockton, and Chicago, our equipment is absorbed, and we won’t see it for the rest of the peak,” he said.

Rob Kemp, president of DRT Transportation, said shippers learned their lesson during the past 12 months.

“There is an appetite on both sides to prepay and lock-in capacity today,” he said. “It’s going to become a free for fall come Aug. 1.”

For shippers who haven’t locked in their capacity, it’s likely that they’ll have to turn to the spot market and pay at least 50 percent more, or even double the rate of last year on some routes.

“If you’ve played the transactional game for years, you’re going to have to pay. Part of our fleet is available for a public use, but it’s going to be at a much higher rate than six months ago,” Old said.

Larry Gross, of Gross Transportation Consulting, believes the surge in trailer-on-flatcar volume this year is because it’s an alternative, and any option is better than none.

“There is a lack of domestic containers, but shippers still need intermodal, so they put the trailer up. And over-the-road trucking companies who don’t lease containers and have a shortage of drivers will use intermodal as a safety valve by putting trailers on a train,” Gross said.

While containers are the primary concern in domestic intermodal, chassis tend to be a chokepoint in the international business.

Although chassis providers have taken considerable efforts to upgrade and buy new equipment, there is more to the equation than raw numbers.

Gross calls intermodal a “coordinated ballet,” in which one problem can trickle throughout the system. This winter, for example, inclement weather and staffing and equipment shortages wreaked havoc on the supply of chassis, usage of containers, and available drayage.

Train speeds have not improved, even after winter turned to spring. Through June, the rolling four-week average of train speeds was less than 29 miles per hour, down 4.1 percent year over year, 8.6 percent worse than two years ago, and 4.8 percent slower than the five-year average.

“When you have train speeds dropping, it’s probably an indication that the schedule reliability is also being impaired. That’s much more significant because it becomes more difficult to plan ahead, which sucks up chassis capacity, terminal capacity, and drayage capacity,” Gross said.

“When trains bunch, boxes pile up in a railyard or a shipper’s yard and they’re sitting on chassis for a longer period of time. That’s when you see the shortages. So it’s a question of fluidity, not necessarily the number of chassis in the market,” he said.

Truckers will often face longer lines in these situations, eventually translating into detention time and other accessorial fees.

Shippers in small markets more than 100 air miles from an intermodal ramp could also struggle mightily this autumn. For example, Hilsenbeck described a 450-mile haul from Houston to Oklahoma City, requiring an ELD.

“I showed draymen an import to Oklahoma City and a perfect match of an export back. They could make a round trip and get a round trip rate for both the import and export, make an easy profit, and no one wanted it,” he said.

You have heard it before: book now, be a strategic partner, be flexible, give enough lead time.

Schneider National, one of the top domestic intermodal companies, urges shippers to step up to prevent containers and chassis from piling up.

“I’m pleased that our rail partners have been adding terminal capacity and improving their processes to drive more velocity. However, they can’t do it on their own, and neither can we. Shippers can help us by giving us broader windows at delivery so that we can pull boxes soon after grounding to relieve terminal congestion,” said Jim Filter, Schneider’s director of intermodal operations.

“We need to maximize the utilization of both the box and our drivers. Shippers can help us maximize the use of both by flattening demand across the week and month. In turn, we are going to give more capacity to shippers that are make better use of our most precious resources.”