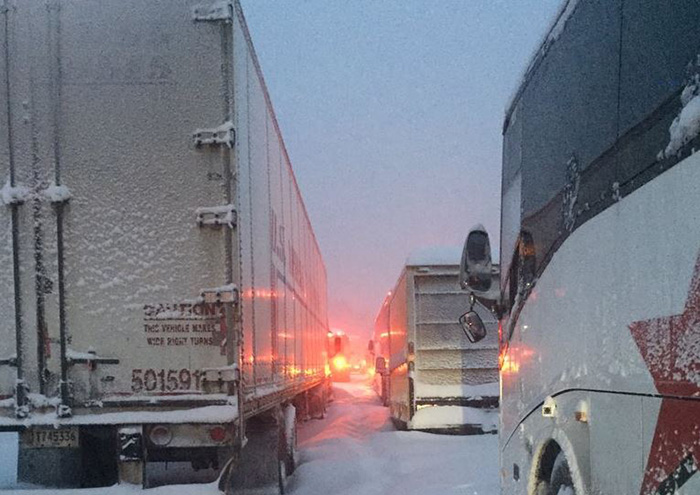 Vehicles trapped in snow on the Pennsylvania Turnpike. Credit: @GoDuquesne

Shippers across the U.S. can expect delays this week as the Mid-Atlantic and Northeast dig out from Winter Storm Jonas, which dumped two or more feet of snow on a region stretching from West Virginia to New England and created icy road conditions in an even larger area.

The storm created a multi-day crisis for freight and passenger transportation networks in one of the largest U.S. population centers. Airports from Washington to Boston reported delays and flight cancellations, affecting airports in Chicago, Atlanta, Dallas and other cities.

The aftermath of the storm will slow freight pickups and deliveries in the Eastern U.S., but also affect freight moving through and to the region, sending icy ripples through supply chains throughout North America and delaying inbound shipments to major consumer markets.

That was obvious to CSX Transportation, which on Saturday said it was experiencing challenges along a network stretching from the Great Lakes to the Mid-Atlantic and Southeast. In the most heavily storm-impacted regions, trains were held. Road conditions kept some crews from getting to on-duty points.

“Customers should expect delays up to 48 hours on freight moving through these impacted areas,” the railroad said in a note to customers Saturday.

“Recovery crews are working behind the storm to restore full service and make any infrastructure or equipment repairs that may be necessary,” the railroad said.

Service into and out of Baltimore; Croxton and Elizabeth, New Jersey; and Bethlehem, Greencastle, Harrisburg, Morrisville and Rutherford, Pennsylvania was also severely impacted in the winter weather, the railway said.

“As a result of snow accumulations, freezing temperatures, and blizzard-like conditions many roadways have been and will be impassable,” the company said.

The railway’s intermodal facilities are open and NS is operating trains and loading and unloading containers and trailers to the extent allowed by heavy snow accumulations. Customers should expect delays, however, up to 48 to 72 hours for freight moving to and from the Mid-Atlantic and Northeast intermodal facilities, NS said.

Trucking companies in the U.S. Northeast are slowly digging out. However, many trucks will have nowhere to go, immediately. Stores and other consignees are likely closed, with parking lots and freight yards still filled with snow. In some areas, road restrictions remain in place.

“We will be running limited operations in the snow-affected areas,” A. Duie Pyle, a West Chester, Pennsylvania-based less-than-truckload carrier, said in an e-mail.

“Due to road restrictions and the ongoing snow removal efforts of businesses throughout the region, there is currently no delivery service in Maryland, northern Virginia, eastern Pennsylvania, New Jersey and metro New York,” the trucking company said.

Other carriers across the region faced the same challenge. “We anticipate some delays in our Metro and Midlantic terminals based on snow emergencies and travel restrictions,” New England Motor Freight, an Elizabeth, New Jersey-based LTL and logistics company said in a notice on its website. Mid-Atlantic trucking firm Pitt Ohio also said city operations would be limited in parts of West Virginia and Virginia, Maryland and Pennsylvania.

The storm stranded travelers and truck drivers, including the occupants of more than 500 vehicles that were stuck more than 24 hours on a section of the Pennsylvania Turnpike. Several tractor-trailers reportedly jackknifed on the turnpike, blocking traffic near a tunnel. An estimated 150 to 200 tractor-trailers were also stuck on I-77 in West Virginia during the storm Saturday.

Global Shipping Outlook: A Sneak Peek at 2021
Port Performance North America: Managing Cargo Flow During a Pandemic — and Beyond
END_OF_DOCUMENT_TOKEN_TO_BE_REPLACED