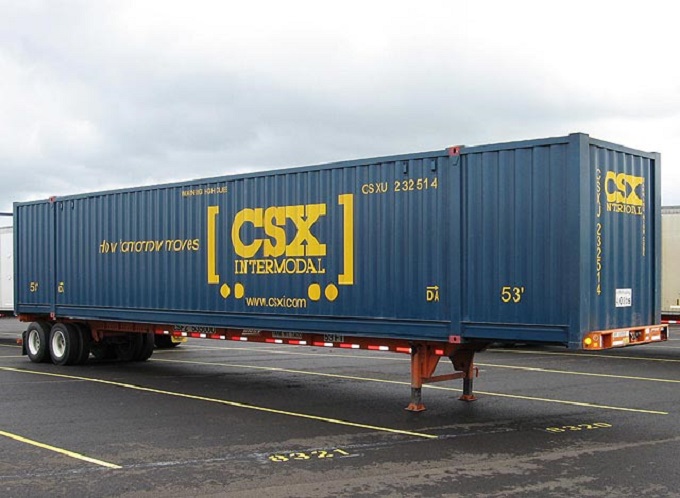 Reduced productivity in tandem with higher demand has created a shortage of available trucks. Shippers, rather than waiting days or weeks for an available truck, are turning to intermodal, less-than-truckload, and signing multiyear contracts to ensure deliveries arrive on time. (Above: A CSX 53-foot container.) Photo credit: Matts-Place.com.

US intermodal carriers Schneider, Hub Group, and Swift Transportation are banking on a strong year in the intermodal sector, investing to beef up their 53-foot container fleets in anticipation of heavy shipper demand in the second half of the year.

As one intermodal executive joked to JOC.com in April, “If it's a rectangle and it can hold freight, shippers will use it to get loads off their docks.” While the comment may have been somewhat hyperbole, it’s a reflection on how much demand is outpacing supply.

The electronic logging device mandate has increased transit times and lowered the productivity of a single truck during a workday, according to Zipline Logistics and fleet executives. While the hours-of-service requirements remain the same, truck drivers who fudged their paper logbooks to finish jobs quicker can no longer do so. Reduced productivity in tandem with higher demand has created a shortage of available trucks. Shippers, rather than waiting days or weeks for an available truck, are turning to intermodal, less-than-truckload, and signing multiyear contracts to ensure deliveries arrive on time.

The Cass Freight Index reports the number of shipments in March grew 11.9 percent year over year and expenditures jumped 15.6 percent. The Cass Freight Index encompasses all modes of commercial transportation, including intermodal and truck. FTR Associates' truck utilization ratio has been running at the 100 percent mark since last September, and the ratio is only expected to dip to 98 or 99 percent by next year.

Consequently, intermodal business rose 7.2 percent to 4.5 million units with domestic business climbing 7.4 percent, according to the Intermodal Association of North America (IANA). It was the best quarter in nearly four years, despite slower speeds and higher dwell times from the railroads this winter.

“Comparisons will be tougher in the coming months. Growth should stay strong, as several factors are boosting the market. But near-term gains are likely not quite as high as [the first quarter’s] 7 percent-plus,” IANA wrote in its quarterly report.

There are also numbers that may be a warning against over-investment.

The number of 53-foot containers moved grew 6.3 percent to nearly 1.9 million, the smallest gain of any intermodal segment. IANA forecasts domestic container business to increase 5 percent to 6 percent for the full year, however, which would be double the growth rate of 2017.

“Even with some slow regions, domestic containers are doing very well. The expanding economy is providing a boost, but so is the tightness in trucking and higher energy prices. Both factors push freight from road to rails,” IANA reported.

But Larry Gross, president of Gross Transportation Consulting, said intermodal is not fully capitalizing on the available opportunities. The intermodal market share on length of hauls more than 500 miles slipped 0.4 percent sequentially to 14.4 percent, the second consecutive quarter of decline.

“The fact that intermodal share has declined during a period of extremely tight truck capacity is another indication that an opportunity for intermodal growth is being missed. Intermodal capacity constraints due to insufficient domestic container supply, low equipment velocity, and drayage issues all contributed to the problem,” Gross said.

The different snapshots of the industry force intermodal executives to ask themselves some key questions. Do they really want to buy an asset when there could be a recession within the next five years? Truckstop.com senior economist Noël Perry has publicly warned transportation providers to prepare for a downturn since the US economic recovery is currently the second-longest recovery in US history. Standard depreciation of a container, however, indicates its useful life as 12 years.

Fleets may also want to consider how much business is expected to grow in 2018. If demand increases between 4 percent and 6 percent this year, how much should capacity grow?

Johnny Yeung, general manager for Singamas Container Holdings, told JOC.com that he uses 20,000 units as an annual benchmark. CIMC Group and Singamas build a majority of the 53-foot US containers, according to intermodal executives.

"If it is more than 20,000, it is a good market, less than 20,000 is weak. It seems to me that the intermodal industry is recently resuming its interest to buy more 53-foot containers and that final number could be very close to 20,000 units this year,” Yeung said.

J.B. Hunt Transport Services, which owns the most containers of any trucking company, has about 89,500 boxes, about 4,300 more than one year ago, according to its first-quarter earnings report. The company did not respond to requests for comment on its future plans.

“We did up that by about 500 containers to have that capacity available for our customers when they need it. And so, with transits as they are and with the demand that we've had, we thought it's prudent to increase the order by 500,” said Terri A. Pizzuto, Hub’s chief financial officer, in an April earnings call.

Schneider, No. 3, announced plans to add about 3,850 containers this year, 450 of which were put in place in the first quarter and 3,400 before the autumn peak season. This would bring Schneider’s total count to nearly 22,000 containers.

“The additional boxes that we will start to see on a more prominent basis coming in the middle of second quarter will give us an opportunity to capture the quality demand that our customers are asking us to cover. And right now we are as constrained on the box front as we are on the truck front,” said Mark Rourke, chief operating officer, in an April earnings call.

“I have never experienced demand like this before,” added Jim Filter, general manager of Schneider Intermodal, in a conversation with JOC.com. “Our customers are dealing with some of the biggest transportation challenges that they’ll probably face in their entire career and we made a decision that we’re going to double down to help them in any way we can.”

Dave Jackson, CEO of Knight-Swift Transportation, said the Swift Intermodal business will be adding 750 containers this year, expanding beyond its current fleet size of 9,150 units.

Milestone Equipment, which controls about 13,000 containers, plans to add a few hundred more this year. Doug Hoehn, Milestone’s executive vice president, told JOC.com he expects to book almost all of his available containers by the end of June.

“If I had more units in the fleet right now available, we could lease them out easily. Our message to all the customers is, ‘If you think you are going to need containers for the peak season, you better commit to them now because they are going fast,” Hoehn said.

Garry Old, CEO of COFC Logistics, delivered the same message as Hoehn, predicting his boxes will be fully booked by August, even after upsizing his fleet from 1,800 to 2,000 containers. COFC owns about 60 percent of the units and leases the other 40 percent from companies such as Milestone.

“It will be close to zero containers. In those cases, we distinguish between our partners and our ‘fourth-quarter friends’ that only come out of the woodwork for the peak. We take care of the people who take care of us throughout the year and we will continue to do so this year,” Old said.

Asked why he will not increase his count to 2,500 or 3,000 containers, Old said he has to balance peak demand against the offseason when equipment may idle for weeks.

Not everyone, however, has decided to purchase or lease new equipment.

XPO Logistics owns 10,000 containers including Pacer International boxes acquired when XPO bought Pacer in 2014. Unlike its competitors, though, CEO Bradley Jacobs told JOC.com that there are no plans to place any orders in 2018.

“We prefer to put our capital expenditures into technology,” he said. “But we have an opportunity to grow our intermodal business just by better utilizing our containers. Technology, planning, and predictive analytics and a focus on higher box turns can generate more revenue with the same amount of containers.”

C.H. Robinson Worldwide has not made a final decision on its plans for 2018. The third-party logistics provider has a fleet of about 2,700 units, according to Jason Hilsenbeck of Loadmatch and Drayage.com. Phil Shook, C.H. Robinson’s intermodal director, would not confirm the figure because the company does not publicize the data. But like Jacobs, he said the ability to quickly turn around containers is just as important as the container counts.

“Everyone seems to have had some erosion in cycle time due to the railroad performance in the first quarter. So that is going to be a really big driver in how tight the capacity is later this year. If we can shave a day or two from what it was [this winter] that will create additional capacity,” Shook said.

Whether the strategy is buying more boxes or increasing productivity, much of the success or failure to serve shippers will come down to whether the railroads can overcome the service woes from this winter.