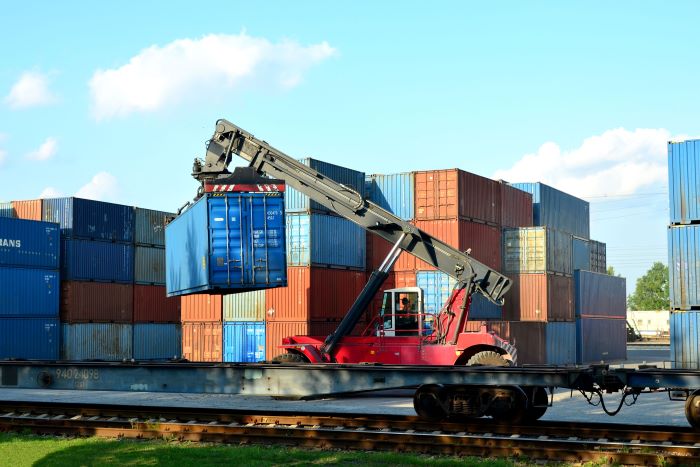 Under the pressure of the pandemic, domestic container loads in the second quarter dropped over 6 percent from Q1, but TOFC loads actually rose fractionally. Photo credit: Shutterstock.com.

The pandemic has already ushered in many changes in supply chains. One of the more prominent has been the acceleration of the shift from brick-and-mortar retail to e-commerce. This is having profound effects, including for intermodal.

In a reversal of fortune, Trailer on Flat Car (TOFC) activity has rebounded strongly. Looking at this piece of the intermodal pie can give us insights into what’s happening more broadly.

The shift from trailer to domestic container has been underway for years, and in recent years it has accelerated as railroads have been pushing to simplify their operations and increase capacity under the umbrella of Precision Scheduled Railroading (PSR). For Q1 2020, the last quarter of normalcy prior to the pandemic, TOFC revenue moves were down 23 percent versus the prior year, even as domestic container traffic rose 2 percent for the same period.

But the picture began to change in the second quarter. Under the pressure of the pandemic, domestic container loads dropped over 6 percent from Q1, but TOFC loads actually rose fractionally. The sequential growth has been remarkable. After dropping 14 percent from March to April, TOFC volume grew 22 percent in May and then another 18 percent in June.

E-commerce is clearly driving a good portion of the increase. TOFC revenue moves of 28-foot “pup” trailers, the size favored by parcel and LTL carriers, leapt 17 percent from Q1 to Q2. Further, 48-foot trailers typically only appear in quantity on TOFC during the holiday rush, when the parcel carriers’ seasonal surge fleet enters service. But 48-foot TOFC moves more than doubled from May to June, an unusual sign that the surge fleet is being drawn into service during the summer.

Fifty-three-foot trailers did not see gains as large. Q2 volume was down a bit more than 2 percent from Q1. Because temperature control intermodal providers and truckload dry carriers also use 53’s, the contribution to 53-foot TOFC growth from e-commerce was less clear. But the 53-foot TOFC gain was still better than domestic containers.

Or course, percentages don’t tell the whole story. While the TOFC percentage gains are large, the overall volume is still a small fraction of the domestic container activity.

A lot of attention has been focused of late on Southern California. TOFC loads from Southwest to Midwest (i.e. California to Chicago and the like) shot up 19 percent from Q1 to Q2, but the gain was all due to 53’s (up 24 percent), while 28’s actually declined a bit. Perhaps the 53’ story in this lane was more about temperature control growth than e-commerce. Meanwhile, domestic containers grew 9 percent over the same period. It’s hard to say what the e-commerce contribution was to the domestic container gains.

The duration of the TOFC boomlet is questionable. 28’ trailers are, to some extent, “sand in the gears” of intermodal. They consume about the same quantities of train and terminal capacity versus 53’ trailers with about twice the cube. Changes are coming one after the other at a supercharged pace right now. Eventually, the pace of change will slow and the system will have an opportunity to adjust. Volume will shift over to more efficient containers where it makes sense to do so.

There is another important lesson to be gained from the current situation, and that is the role of TOFC as intermodal surge capacity. While there is a finite number of domestic containers in the North American fleet, there are, for all practical purposes, an infinite number of trailers available. TOFC capabilities provide US carriers with an ability to flex upward that is not readily available in fully containerized systems like those found in Canada and Mexico.

If (or when) full containerization is reached in the United States, the sector will be even less flexible in its ability to respond to unexpected surges in demand than it is today, unless a means is found to make additional boxes available at times of high demand.

Global Shipping Outlook: A Sneak Peek at 2021
Port Performance North America: Managing Cargo Flow During a Pandemic — and Beyond
END_OF_DOCUMENT_TOKEN_TO_BE_REPLACED