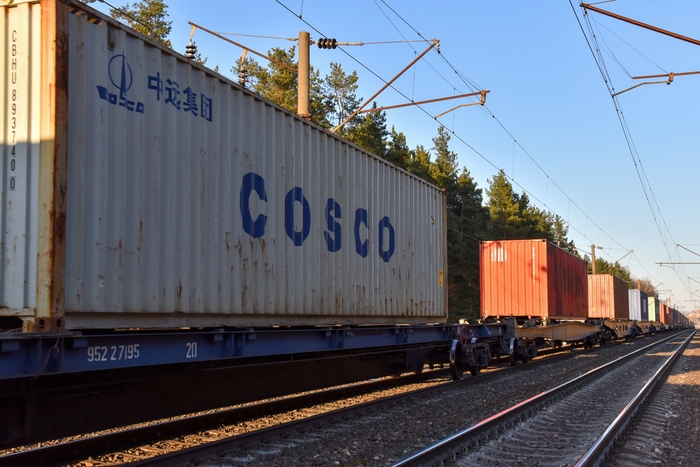 China-Europe rail volume posted record growth in March as demand surged back when factories reopened after the February shutdown in a measure to slow the spread of coronavirus. Photo credit: Shutterstock.com.

The supply chain chaos wrought by the coronavirus disease 2019 (COVID-19) has strengthened the value proposition of the China-Europe rail route, with strong demand for services over the land bridge as shippers struggle with extensive ocean cancelations and balk at sky-high air freight rates.

Forwarders active in the rail sector are all reporting strong demand. A Kuehne + Nagel spokesperson said overall, tight conditions remained for Asia-Europe rail freight and the forwarder planned to continue operating weekly KN Eurasia Express block trains connecting Xi’an with several European destinations through on-carriage options. The spokesperson said with a direct line via Kaliningrad in Russia and Mukran in Germany, cargo can reach Europe in 12 to 14 days.

UK-based forwarder Davies Turner in mid-March reactivated its weekly direct Express China Rail service from Xi’an in central China to the UK, with cargo railed to Duisburg in southern Germany, the bonded containers trucked to Rotterdam, ferried to Purfleet, and trucked to the forwarder’s nearby Dartford distribution center for customs clearance and delivery. Despite the number of cargo handovers, the containers arrived in Dartford in 17 days, a record for Davies Turner. Contrast that with sea freight transit of about 35 days, and air cargo that can take more than a week.

DHL Global Forwarding has increased the frequency of its trains and is reporting high levels of utilization and demand in both directions.

Pricing is the main driver of the growing rail demand. Passenger flights on the China-Europe trade lane have been almost completely suspended, and the travel bans have removed vast amounts of air cargo capacity and pushed rates out of Shanghai to $7.33 per kilogram.

Pricewise, rail freight on the China-Europe network is positioned between air and ocean, but the land link is far more competitive with air than it is for the traditionally cheaper and higher-volume ocean shipments.

Tony Cole, head of supply chain at Davies Turner, said sending cargo by rail is three to four times more expensive than ocean shipping, depending on whether the cargo is full container or less-than-container-load (LCL), and before the coronavirus, rail to Europe was 70 percent cheaper than air. That price differential will have grown as air freight rates hit record levels.

Cole said by comparison, once broken down into a per kilogram price used by air cargo, the rail rate equated to $0.24 per kg. “We are seeing a rapid pick up in inquiries for rail from China and the volume is strong at the moment,” he said.

Volume on the China-Europe network surged 18 percent year over year to 174,000 TEU in the first quarter, according to a Railfreight.com report citing data from China National Railways. In March alone, when most train services from China to Europe resumed as factories reopened, a monthly record of 73,000 TEU was carried, with 64 percent of the cargo on the headhaul Europe-bound route.

With such high demand, forwarders are calling on shippers to make their bookings as much as 14 days in advance. “For cargo owners, the secret to securing space on trains is to make the bookings early and to provide forwarders with accurate cargo availability dates so we can plan around that,” Cole said.

Asked whether a portion of the cargo volume shifting from air freight to the rails was likely to remain once the coronavirus was no longer an influencing factor, Cole said such a shift was possible, although rail capacity would remain a limiting factor.

“If you look at where China-Europe rail is placed in terms of transit times and price, this could be the moment when the reliability of the service is impressed on shippers, and once they see the stability of the service, bookings redirected from air freight to rail may be permanent,” he said.

Akos Ersek, chief policy advisor for the International Union for Road-Rail Combined Transport (UIRR), agreed that this was a possibility, as the fundamental value proposition of transcontinental rail was attractive.

“Air freight is very expensive, and it only makes sense with very expensive cargo,” he told JOC.com, adding that it was a waste for any other commodity that was light but bulky — even medical supplies that are currently filling all available airline capacity — to be transported by air.

“The overall cost of transcontinental rail can be 75 percent less per kg than air, while the gross duration of the transport can take not more than 20 to 30 percent longer. Added to the equation is the price volatility of air cargo, which is not the case with the intermodal alternative.”

Angus Hind, director Europa Air and Sea, took the opposite view. “Air freight will always play a vital part of the supply chain. Air freight is driven by the users expectation and the commodity, some of which can’t live with the lead times offered by rail,” he said.

“I can see some people using rail in the short to medium term while stock levels will still be high due to the reduced demand for products, but once this stock holding decreases and air freight pricing comes back to normal levels, then people will quickly switch back.”

Another development in the rail network is the improving backhaul volume from Europe to China that is significant and is leading to a more balanced trade. Transport consultant Andre Wheeler said that in 2019, 57 percent of the cargo moving by rail comprised westbound trade out of China, an increase of 21 percent compared with 2018. While it is unclear whether the backhaul share will increase further this year considering the widespread shutdown of European manufacturing, demand remains for products made in Europe.

In the last week of March, Maersk Line launched the first eastbound train on its AE19 service, which began in August 2019 as a westbound service from Asia to Europe. Maersk said in a statement that the overall transit time of the new service using short-sea shipping to ports in Northern Europe, rail to the Russian Far East, and short-sea shipping to ports in South Korea and Japan will be 23 to 32 days, about half as long as the traditional ocean route.

The train was loaded with plywood and chemical products and is currently en route from St. Petersburg in Russia to the port of Vostochny in the Russian Far East. On arrival, the containers will be loaded on Maersk’s short-sea vessels for delivery to South Korea and Japan.

In 2019, two-way volume between China and Europe almost doubled year over year, growing 98 percent to about 725,000 TEU, according to China Railways. Data from the EDB Centre for Integration Studies show similar volume levels.

Global Shipping Outlook: A Sneak Peek at 2021
Port Performance North America: Managing Cargo Flow During a Pandemic — and Beyond
END_OF_DOCUMENT_TOKEN_TO_BE_REPLACED