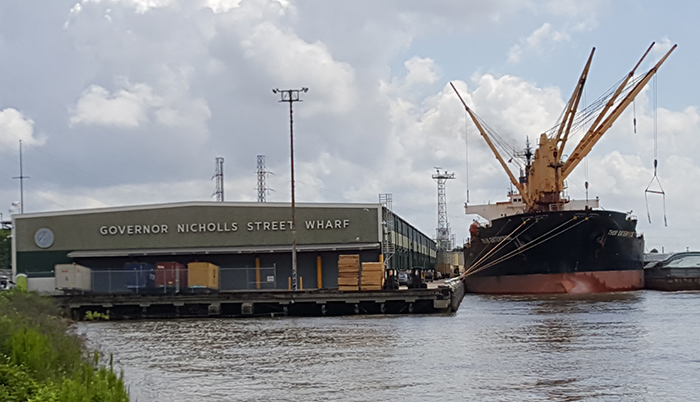 The Port of New Orleans has found a new warehouse site for a synthetic-resin exporter and moved a step closer to closing a complex deal to acquire the city-owned Public Belt Railroad in exchange for two old Mississippi River breakbulk wharves.

Port CEO Brandy Christian called the agreement a “win-win” that allows TCI Packaging resin bagging and transloading operations to continue uninterrupted and to expand. TCI is building a 500,000-square-foot packaging center near its existing plant in New Orleans.

New Orleans’ resin exports during the first five months of this year totaled 24,858 TEU, up 9.6 percent year over year, according to PIERS, a sister product of JOC.com. The port’s 2016 resin volume was 57,714 TEU, up 11.9 percent from the previous year, and was second only to Houston.

Under an agreement announced last month, the port will take over the Public Belt, which operates 26 miles of track and performs switching for the six Class I railroads serving New Orleans. The city will acquire two old breakbulk wharves that will become part of a three-mile linear park along the river.

The port had not been eager to take over the railroad, but stepped in after port businesses said they worried that rates would rise and service would suffer under Mayor Mitch Landrieu's earlier proposal to sell the short line in order to help shore up city finances.

A key part of the wharves-for-railroad swap required the port to find a new warehouse site for TCI Packaging, which uses the Gov. Nicholls and Esplanade Avenue wharves as a satellite warehouse for its resin-packaging facility. TCI has 12 years remaining on its 15-year lease on the wharves at the edge of the city’s French Quarter.

The port board voted to spend $10.5 million to acquire a site for TCI at a former shipyard near TCI’s main packaging plant next to the decommissioned France Road terminal on the city’s Industrial Canal. The port will fund an additional $4.5 million in improvements. TCI will be provided with a 20-year lease for the new facility.

How to Improve OTIF: 15 Tips for On Time and In Full Delivery
END_OF_DOCUMENT_TOKEN_TO_BE_REPLACED