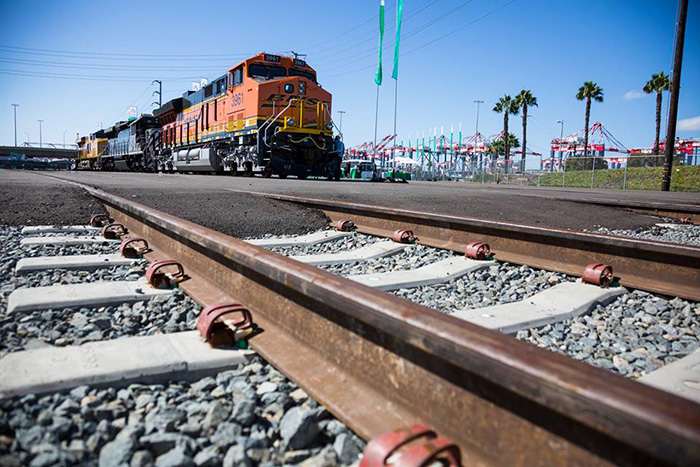 A BNSF train near the Port of Long Beach

Driven primarily by the need to reduce truck congestion at the ports of Los Angeles and Long Beach, creation of a short-haul rail service to shuttle containers from on-dock transfer facilities at the largest U.S. port complex to an inland location about 50 miles from the harbor could become a reality.

The concept has been studied periodically over the past two decades, but the economics always fell short and the logistical challenges could not be overcome. However, growing port congestion the past two years, increased drayage costs and a desire by beneficial cargo owners in Southern California’s Inland Empire to avoid sending their truckers to the harbor offer financial encouragement. Shippers in the Inland Empire will have the advantage of sending their trucks only a short distance to the new rail hub rather than all the way to the harbor and back.

“It saves money throughout the supply chain,” said John Husing, an economist in the Inland Empire who is contributing data to a study being conducted as part of the ports’ supply chain optimization efforts. “In an economic sense, I think the numbers are there.”

Logistically, the main challenge would be to make the loading of on-dock shuttle trains work in an increasingly complex marine terminal environment. Mega-ships operated by shipping lines in vessel-sharing arrangements carry containers belonging to more than a half-dozen lines on the same vessel, and each of the lines has its own contractual intermodal arrangements with the two western Class I railroads.

Therefore, stowing vessels in Asia so the ships can be unloaded in LA-LB and then loaded onto unit trains of about 200 containers at an on-dock yard would be a complex endeavor. Finally, efforts to get buy-ins from BNSF Railway and Union Pacific Railroad are underway, but the outcome is uncertain at this time.

The key to success may be held by the importers that operate warehouses in the sprawling Inland Empire east of Los Angeles who would ultimately pay for the service through their freight rates. Husing has been talking to the shippers, and he said they are “quite enthused.” Warehouses in the Inland Empire would significantly reduce the distance trucks would have to travel if a short-haul service was established there from the ports. Also, there are a number of shippers with operations in Phoenix and Las Vegas that would be much happier sending their trucks to the Inland Empire rather than to the harbor, Husing said.

The critical mass of cargo needed to support a short-haul rail service is there and it will grow steadily in the coming years. According to the San Pedro Bay Cargo Forecast released in January by Mercator International and Oxford Economics, loaded import container volume in LA-LB in 2015 totaled 7.9 million 20-foot-equivalent units and it is projected to grow to 10 million TEUs by 2020 and 12.1 million TEUs in 2025.

Containerized imports are a significant contributor to truck congestion at marine terminals as truckers clog entrance gates when vessels arrive and exit gates after they get their load. If more containers leave the port by rail, fewer trucks will have to pass through terminal gates, thereby helping reduce congestion. According to the study, about 38 percent of containerized imports are placed on trains at on-dock railyards and moved intact to the eastern half of the country.

A total of 62 percent of imports leave the ports by truck. About half of the imports that move by truck are destined for warehouses in California, Arizona and Nevada, where the merchandise is consumed locally. The remaining half is typically drayed to transloading facilities in Southern California, where the merchandise is transferred into 53-foot domestic containers and then shipped east.

Of the import containers that leave the ports by truck, some 30 percent to 40 percent are destined for the Inland Empire, providing a sufficient cargo base for a short-haul rail service, said Mike Christensen, senior executive lead of supply chain optimization at the Port of Long Beach. When conditions are ideal for trucks, which is when marine terminal gates are not congested, traffic is light on local freeways and the PierPass traffic mitigation fee is not charged. In this scenario, trucking becomes the most efficient and least-costly way to move containers from the harbor to the Inland Empire, Christensen said.

In reality, terminal gates are often congested, freeway traffic is rarely light and the PierPass traffic mitigation fee of more than $140 per 40-foot-equivalent container is in effect on truck moves during the peak daytime hours. Containers that leave the terminals by rail are not subject to the fee, so a business case is being built for a reliable short-haul rail service to the Inland Empire, Christensen said.

John Doherty, CEO of the Alameda Corridor Transportation Authority, which provided some of the information being used for the short-haul study, said earlier studies could not make a business case for short-haul rail and concluded a subsidy of about $150 per container would be needed to make the concept work. Since then, increasing port congestion, the PierPass traffic mitigation fee and the growth of warehousing operations in the Inland Empire are changing the economics of a short-haul venture, Doherty said.

Importantly, the ports are identifying export opportunities in the Inland Empire to refill the containers that are unloaded at the import distribution facilities with paying cargo. If the short-haul service becomes a reality, ports believe it could also attract grain-transload operations to the Inland Empire, further enhancing opportunities for profitable two-way hauls.

The two ports are championing the case for short-haul rail as one of a number of options to improve supply-chain efficiency, but relieving pressure on the gates at the 13 container terminals is a primary motive. The congestion began to surface in the spring of 2014 with increasing calls by mega-ships with capacities of 10,000 TEU to 14,000 TEUs. Each vessel call generates at least 5,000 container moves, although 10,000 or more container moves per vessel call are now common.

Cargo surges from these mega-ships quickly congest marine terminals, especially if imports remain on the docks for the customary four days of free storage time. Although, containers that move by rail usually leave the terminals in 24 hours or less. Unit trains that are built on dock for primary destinations such as Chicago, Dallas and the Ohio Valley carry as many as 750 containers, although short-haul trains to the Inland Empire will be shorter and will probably carry about 200 containers. Nevertheless, each train eliminates 200 truck moves from the terminal gates and local freeways.

Congestion problems peaked in late 2014 through early 2015 because of work slowdowns and employer retaliation associated with the coastwide contract negotiations between the International Longshore and Warehouse Union and the Pacific Maritime Association. That was probably the biggest motivator for revisiting short-haul rail. However, with U.S. containerized imports projected to increase about 3 percent to 5 percent each year over the next few years and weekly services with vessels up to 18,000 TEUs possible in the coming year, long-term planning for short-haul rail is beginning to make sense.

Short-haul rail, however, comes with logistical challenges at the on-dock railyards that are now present at all of the container terminals in the port complex. Ted Prince, co-founder and chief operating officer at Tiger Cool Express, a veteran of the shipping and rail industries, said many of the on-dock railyards are too small and do not offer sufficient capacity for building full unit trains. At the same time, with 18,000 TEU ships on the horizon, marine terminals probably need the land that is taken up by on-dock railyards for cargo handling or the terminals will experience even greater congestion, Prince said.

LA-LB executives said recent changes in the harbor resulting from their combined investments of more than $1 billion are resulting in larger, more efficient on-dock rail operations. For example, the $137 million railyard at Berth 200 in Los Angeles supplements the capacity of existing on-dock railyards by providing space for rail car storage and longer tracks for building unit trains, said Eric Caris, director of cargo marketing at the Port of Los Angeles.

He added that at the renovated TraPac terminal automated transfer of containers from the vessel directly to the railyard is taking place. Also, container terminals are larger today and build in more space for on-dock rail, such as the 45-acre on-dock railyard at the 400-acre APM terminal in Los Angeles. “Certainly our significant investment in on-dock is coming to fruition,” Caris said.

Long Beach is spending $1 billion for overall rail improvements, including a railyard expansion at Pier B to provide more tracks for storage and the building of unit trains. Christensen said that while it is accurate to say many on-dock railyards were inadequate for today’s cargo volumes and mega-ships when they were first developed, continuous improvements over the years have transformed them into “real railyards.”

Despite these advancements, developing short-haul rail in Southern California will require support from the UP and BNSF railroads, which own the tracks and much of the rolling stock and equipment in the region. The railroads could work out an agreement with Pacific Harbor Line, which performs switching in the harbor on behalf of the railroads, to pull the trains to the Inland Empire, but that would be a new venture for PHL in its relationship with UP and BNSF.

UP spokesperson Justin Jacobs said the railroad is in early discussions with the various parties about opportunities that exist for on-dock and short-haul rail at the ports, but any project that moves forward must “make sense from a commercial and business perspective.”

BNSF spokesperson Lena Kent noted that historically there has not been a compelling business case for a short-haul rail service to the Inland Empire. Therefore, BNSF has concentrated its efforts on attempting to secure environmental clearance for construction of its proposed near-dock Southern California International Gateway five miles from the harbor, which would provide sufficient staging acreage for trains that cannot be built on dock. However, a California court recently found the SCIG environmental impact report to be inadequate, so the future of the near-dock facility is uncertain.

The short-haul study has yet to determine an exact location in the Inland Empire where the trains would terminate. Husing said several locations are being examined to determine where shippers throughout the region could be best served, and he does not think that settling upon a location for the rail terminus will be a significant issue.

Greg Stefflre, a trucking company owner with operations in the region and an attorney who handles motor carrier cases, said the model for short-haul rail “has always been there,” and logistically it makes sense for motor carriers as well as shippers. “I don’t think any trucker would oppose it. It would be a wonderful thing,” he said.