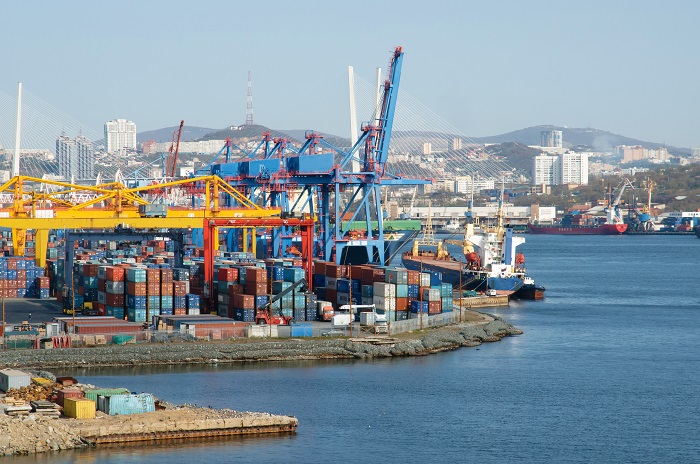 Russian shippers and foreign companies operating in the country are unhappy with the development rates of Far East seaports and their focus on low-cost coal and bulk cargoes, instead of containers. A new railway upgrade plan, combined with seaport development, may solve their problem.

For example, the Trans-Siberian Railway (TSR) currently can transport about 200,000 TEU to the Far East seaports annually. Although the TSR’s capacity will increase to 500,000 TEU in the years ahead, the infrastructure network’s capacity has not expanded to accommodate the growing freight traffic in this theater.

The same goes for the Baikal-Amur Mainline (BAM), Russia’s second most important railway.

In addition, there are major carrying capacity restrictions on the Baranovskiy-Khasan section of the TSR — on the connecting link between the TSR and on the railways of China and North Korea — toward the Russian seaport of Posiet. By 2020, it may still have a carrying capacity restriction equivalent to 10 million tonnes (11 million tons) and about 400,000 TEU per year.

By 2020, the same problem may occur at other sections of Russia’s railways in the Far East, all of which have a direct connection to the largest local seaports: Lena-Vostochnaya-Taksimo (western BAM), Irkutsk-Slyudyanka (TSR), and Komsomolsk-Vanino (eastern BAM).

In the meantime, the Russian government said it is aware of shippers’ concerns and is considering possible solutions to the problem.

A representative of Russian state-owned railway RZD said that 562 billion rubles ($10 billion) will be invested in Far East railway modernization in the next two years, with the goal of substantially increasing carrying capacity. The state plans to increase capacity by 66 million tonnes.

At the same time, Russia’s government hopes the rail lines can transport even more cargo from China’s shippers in its northwest and central provinces to the Russian seaports. In recent years, China’s shippers have started using Russia’s seaports in the Far East to deliver cargo to different parts of China.

In 2017, Chinese container cargo volume through Russian Far East seaports increased 20 percent to about 600,200 TEU. However, in the view of Russian officials, this total is well below potential volume. According to initial expectations of the Russian Ministry of Transport, Chinese inland transit traffic through Far East seaports should have amounted to 900,000 TEU.

Currently, container cargo traffic from northwest China to China’s major seaports is about 4 million TEU annually and is growing at an annual rate of 10 to 15 percent. The majority of this cargo is rail-transported, including many consumer goods, which are then exported by sea to Europe and other destinations.

Concerning shipper transport costs, Russia’s Port of Vladivostok in the Far East for cargo transport to its northwest provinces saves China’s shippers about 3,000 yuan ($474) per container.

The distance between Suifenhe, a city in the southeastern Heilongjiang province, and Vladivostok is only 230 kilometers (143 miles), compared with almost 1,500 kilometers to the nearest Chinese port, Dalian.

According to the Russian government, by approximately 2020 to 2022 China inland transit traffic through Far East seaports should increase to 2.5 million to 3 million TEU, depending on the development/expansion pace at Russia's Far East seaports.

Russian officials’ highest hopes concern the Zarubino seaport expansion. The port has handled only 500 TEU so far in 2018. However, expansion construction has been slow, due to the project’s likely large cost. Private sector and Russian government funds will be needed to bring it to completion. Summa Group has invested 200 billion rubles, with the group hoping that part of Zarubino’s development funds may be provided by DP World, which is expected to invest no more than $600 million.