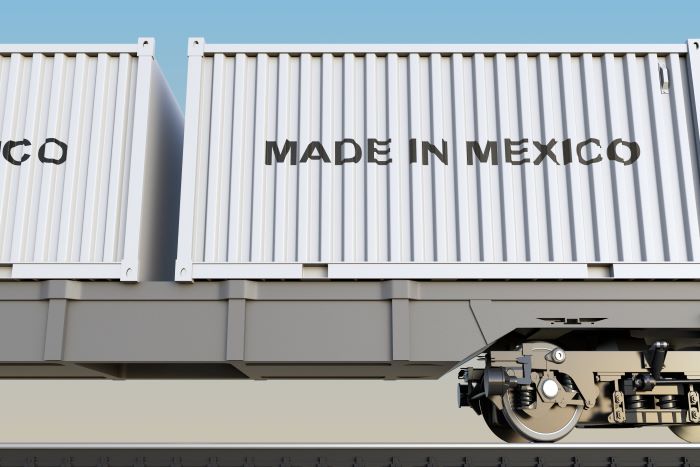 One of the potential growth areas for North American intermodal is Mexico, where the evolution of intermodal is still in the early stages. Although there is plenty of opportunity, performance has been spotty.

Over the past 12 months, there have been just shy of three-quarters of a million intermodal revenue moves involving Mexico, according to Intermodal Association of North America (IANA) ETSO data. This means Mexico accounted for approximately 4.1 percent of the 18.6 million total North American intermodal movements. The volume of intermodal revenue moves to, from, and within Mexico was about 4.5 percent as large as the volume of such moves involving the United States.

Comparing this with the relative size of each country’s GDP, Mexico’s 2018 GDP was $2.57 trillion, about 12.5 percent of that of the United States.

Digging a bit further, about 60 percent of the Mexican activity had both origin and destination within Mexico while the remaining 40 percent crossed the US-Mexico border with either origin or destination in the US. (An insignificant 9,000 revenue moves occurred between Mexico and Canada).

The intra-Mexico intermodal market looks quite different than the cross-border segment. Most of the intra-Mexico intermodal activity consists of ISO container movements; about 87 percent over the past 12 months. This can be compared with 76 percent for Canada and just 44 percent for the US. The domestic container segment is quite small. Over the past 12 months, less than 58,000 domestic container revenue moves were made — just a bit more than 1,000 moves per week for the entire nation. About 89 percent of these moves were made in private boxes, and only 11 percent in rail-owned domestic containers.

How is intermodal performing in these markets? It’s a mixed bag. In the intra-Mexico market, volume was up in the second quarter by 5.8 percent versus the prior year, with a 3 percent shortfall in the small domestic equipment sector being more than offset by a 7 percent-plus year-on-year improvement in ISO container moves. But this followed a disastrous first quarter that saw a year-over-year decline of over 26 percent, due primarily to operational disruptions caused by protesting teachers blocking the lines and preventing the movement of trains for an extended period in January and February. This deep hole has been tough to dig out of, with 2019 volume through July still down by over 9 percent versus the same period in 2018.

IANA has been collecting data from the Mexican railroads since mid-2014. Comparing 2018 with 2015 (the first complete year for which data is available), intra-Mexico ISO container moves were 4.3 percent lower in 2018, even as Mexico’s economy and the number of TEUs transiting its ports grew. On the other hand, the infant intra-Mexico domestic container volume exploded during this timeframe, increasing 38 percent from 2015 to 2018.

The cross-border picture is also difficult. Volume was down almost 5 percent in July versus 2018 and has declined 9 percent versus the prior year thus far in 2019. Compare this with loaded truck moves northbound across the border which, according to the Federal Bureau of Transportation Statistics, were up 2.6 percent through the end of the second quarter. Longer term, northbound cross-border volume edged up by about 1 percent from 2015 through 2018, while southbound revenue moves have plunged by over 18 percent over the same period, making an already imbalanced market even more so.

The situation on the border is chaotic. Highway ports of entry are backed up for miles due to the diversion of border agents from processing trucks to tasks associated with stemming illegal immigration. This would seem to present an opportunity for intermodal that has not been exploited thus far.

In summary, the intermodal sector is still finding its legs in Mexico. There appears to be substantial room for growth, but intermodal has not yet found the formula to fully capitalize on the opportunity.

Larry Gross can be reached at lgross@intermodalindepth.com.