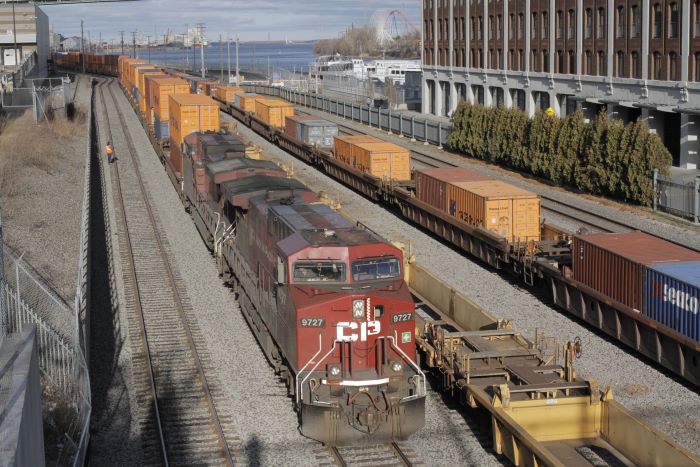 A shortage of drayage capacity serving rail hubs and local warehouses in Toronto and Montreal (above) is the root cause of congestion problems in Canada’s supply chain. Photo credit: Shutterstock.com.

A lack of drayage capacity in Toronto and Montreal for receiving cargo from Prince Rupert and Vancouver is increasingly putting upstream pressure on the West Coast ports, keeping rail dwells elevated at marine terminals and slowing the inland movement of Asian imports.

Vancouver has been grappling with persistent bouts of congestion since last summer due to a series of mishaps — wildfires and flooding that crippled road and rail infrastructure in British Columbia, and sub-freezing temperatures this winter that compounded the rail problems. Cargo flow through Prince Rupert has been relatively smoother. In addition to serving markets in eastern Canada, the ports also serve as gateways for US-bound cargo.

Cargo volumes this year highlight the fact that inland bottlenecks, not container volumes, are the cause of the ports’ woes. Vancouver’s container volume was down 13.7 percent in January through May from the year-ago period, according to the port. Prince Rupert data shows the port’s volume was up 1 percent through the first five months of the year.

“Rail dwell is challenging across the port due to capacity constraints in the network and inland terminals, and this is not isolated to terminals within the Port of Vancouver,” GCT Canada, which operates the Deltaport and Vanterm terminals in Vancouver, told JOC.com in a statement.

The congestion at rail hubs in eastern Canada is a direct result of drayage capacity shortages at those facilities. “It’s an on-going situation with both railroads (Canadian Pacific and Canadian National),” said Julia Kuzeljevich, public affairs manager at the Canadian International Freight Forwarders Association (CIFFA).

“There are fewer drivers in Toronto to handle the volume, creating a backlog/congestion issue. On a YTD basis, total truck visits declined by 18.5 percent,” CIFFA said in a bulletin to its membership. CIFFA noted that the drayage problem, which first surfaced in Toronto in May, has extended to Montreal.

As a result of the congestion at their inland facilities, the railroads are metering, or managing how many trains they are deploying to Vancouver and Prince Rupert. This is causing rail containers to back up at the marine terminals because of reduced train capacity. However, the situation at marine terminals is fluid, with rail dwells changing from day to day.

For example, at GCT Deltaport, the largest container terminal in Vancouver, containers for both railroads were dwelling an average of seven days or longer last Tuesday, according to numbers posted on the Port of Vancouver website. The average dwell on Wednesday dropped to five to seven days for CP containers, and three to five days for CN containers. On Thursday, the CP containers were still dwelling five to seven days, but the CN dwells shot back up over seven days, according to the port. Dwells of longer than three days cause congestion problems.

When the container dwells begin to build for one of the railroads, hampering operations, the terminals immediately push more containers to the other railroad because those containers can be vacated more smoothly, which helps to relieve overall congestion at the marine terminal. However, the second railroad’s operations can quickly become overloaded.

Although the whiplash effect of inland rail congestion on West Coast ports has been pervasive in the US the past year, it has not been a serious problem in Canada until recently.

“We’re seeing elevated dwells because of (delays in) Toronto and Montreal,” said Brian Friesen, vice president of trade development and communications at the Port of Prince Rupert. However, DP World two weeks ago opened a near-dock surge yard near the Fairview terminal and has already begun to move containers there for temporary storage, so that timely move should prevent rail congestion at the port from worsening, Friesen said.

Neither the ports nor the railroads are ready to forecast a return to normal. “The drayage and warehouse capacity constraints in Toronto and Montreal have become so chronic that we are now in a situation of a potential back-up for some time until this gets addressed,” CN said in a statement.

CP, which said “heavy volumes” of intermodal cargo are also contributing to excessive container dwells at the ports, adds that the main issue in the supply chain can be traced to long-dwelling containers at the inland rail ramps. “To maintain network efficiency, all participants in the supply chain must work together to pick up and return equipment promptly,” CP said in a statement.

How to Improve OTIF: 15 Tips for On Time and In Full Delivery
END_OF_DOCUMENT_TOKEN_TO_BE_REPLACED