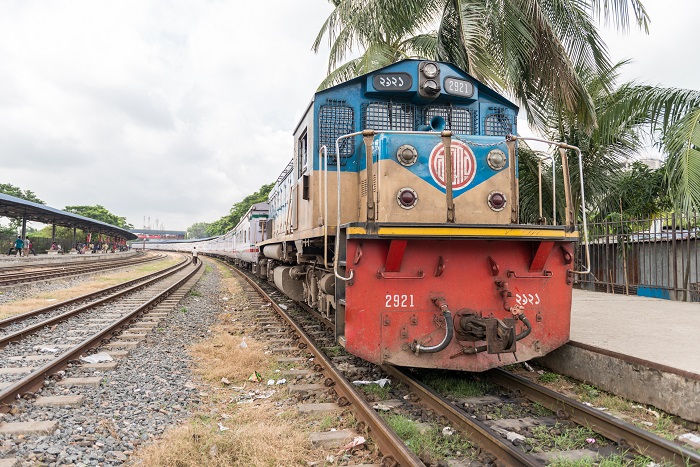 The two projects will improve rail transport across Bangladesh, a more-direct route, with time and expense savings likely for shippers. Photo credit: Shutterstock.com.

The prime ministers of Bangladesh and India Monday, via a video conference, marked the start of the construction on two rail projects, increasing hope that trade between the two countries will soon be transported via the fastest, most cost-effective mode possible.

Of the two rail projects, the Kulaura-Shahbazpur section rehabilitation of the Bangladesh Railway will restore the rail link between Bangladesh and India, as a part of the Trans-Asian Railway Network. The other project, the Akhaura-Agartala rail link, will connect northeastern Indian states with Bangladesh, creating a more-durable line for cargo transport. This 10-kilometer, dual-gauge project will cost $30 million, with funding stemming from Indian grants to Bangladesh.

Further, Bangladesh container cargo transport by train has been increasing, amid the improving rail network. In fiscal 2017-2018, Bangladesh Railway transported nearly 75,000 TEU of goods to and from Dhaka and Chittagong, up from 60,000 TEU in 2013-2014.

Trade between the two totaled about $8 billion in 2018, with at least half of that total transported via the country’s prime seaport, Chittagong. The remainder was transported by trucks, shortsea (coastal) vessels, and trains.

In her remarks, Bangladesh’s Prime Minister Sheikh Hasina said both countries are working to reopen this pre-1965 rail link, especially for cargo transportation. This 53-kilometer (33-mile), dual-gauge project will cost $485 million, $69.5 million of which will be an Indian line of credit. The remainder will come from the Bangladesh government.

Further, once the rail lines are constructed, India will be able to send container cargo to seven northeastern states — Arunachal Pradesh, Assam, Meghalaya, Manipur, Mizoram, Nagaland, and Tripura — from Kolkata and other states, via traversing Bangladesh territory.

Currently, Indian trucks have to travel about 1,650 kilometers to transport goods from Kolkata to the landlocked northeastern Indian states. However, if Indian goods use Bangladesh’s territory, the more-direct route reduces the time/distance travel substantially. That reduced transport expense for the cross-border route is why India is extending loans and grants for these projects.

Bangladesh Railway is also undertaking several projects to facilitate trade, including inland container depots near the capital and other industrial hubs.