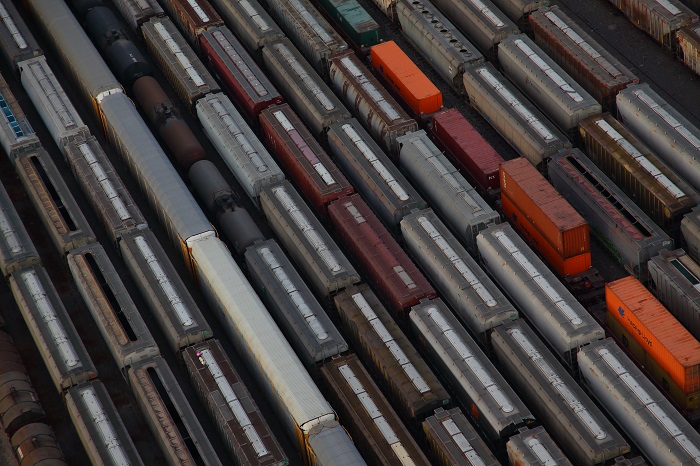 Shippers that move goods in Mexico will want to watch the upcoming election and post-election period closely for signs that the country’s incoming leader is prepared to take steps to crack down on the growing rail/truck cargo threat from thieves. (Above: A freight train rail yard in Mexico.) Photo credit: Shutterstock.com.

A 108 percent increase in cargo thefts in Mexico in the first quarter of 2018, a nearly six-fold increase in thefts of rail-bound freight, and a Ferromex train derailment blamed on sabotage has shippers at a new level of anxiety.

The incident sparked concern among business groups about the ability of Mexico’s frail internal security to protect supply chains amid drug and organized crime gang activity as the country seeks to upgrade its logistical infrastructure in an effort position itself as an international trade hub. The long-festering security issue, and allegations that the government has failed to sufficiently address it, re-emerged as the country prepares to elect a new president on July 1.

“There is a growing and real concern about the rising insecurity in the country,” said Jorge Molina, a Mexico City-based political analyst. “All companies have increased their security measures and some of the largest companies — especially those traveling towards the Gulf of Mexico, who have to cross some of the states where most of the robberies take place — are now carrying armed personnel on their trains.”

3,346 cargo thefts in the first quarter

The vast majority of the 3,346 cargo thefts in the first quarter of the year, a 108 percent rise over the same period in 2017, occurred while the goods were in transit, accounting for 92 percent of the thefts, according to a report by SensiGuard, a security company that provides cargo-protection services and technology.

Cargo robberies from trains in the first quarter of 2018 rose to 852, from 125 in the same period a year earlier, according to a report released by Mexico’s Agencia Reguladora del Transporte Ferroviario, the Rail Transport Regulatory Agency. Road cargo faces theft risks in the states of México, Guerrero, Michoacán, Puebla, Tamaulipas, and Veracruz, according to IHS Markit, which said thefts have been increasing as drug cartels diversify their revenue streams. Risks are also high on the Mexico City-Puebla, Mexico City-Querétaro, and Querétaro-San Luis Potosí highways.

Concern over the attacks heightened after 39 train cars loaded with wheat and flour jumped the rails on May 19 and hurtled down a slope, injuring seven people, in what railroad officials said was an act of sabotage. Grupo México Transportes, the parent company of Ferromex, said the incident was among seven acts of sabotage against its trains since April, which had delayed the delivery of 300,000 tons of goods to the port.

Francisco Cervantes Díaz, president of the Confederation of Industrial Chambers of United Mexican States (CONCAMIN), said the incident showed the security situation had risen to “dangerous levels” that potentially can harm local populations, freight rail workers, and the economy.

“The safety risk is big, in part because often what is transported are highly dangerous chemical products, and also because it gravely affects the businesses that use this type of transportation,” he said in a statement, adding that the threat could at some point scare off investors.

In May, the head of Mexico's automotive industry association, Asociación Mexicana de la Industria Automotriz (AMIA), warned that train robberies were costing the sector multiple millions of dollars in losses, according to a country risk report by IHS Markit, parent company of JOC.com. With about 70 percent of auto sector exports transported by rail, thieves target auto parts including rear-view mirrors, seats, doors, and headlights, the report said, citing AMIA.

Ferromex, one of three main railroad companies in Mexico, operates mainly in the west, and also owns Ferrosur, which operates in the south of the country. The third railroad company, Kansas City Southern de Mexico, operates in the east of Mexico. The volume of cargo moved by rail rose 6 percent in the first quarter of 2018 to 31.2 million tons, from 29.3 million tons in first-quarter 2017.

Mexico, seeking to bolster its logistical network, has spent heavily on its port system to meet the needs of the country’s growing manufacturing sector, especially auto makers, which are clustered around the center of the country near Mexico City. The federal government has targeted the Port of Veracruz for a major expansion that will make it the largest in the nation.

Supply chain security and cargo theft has long been a major concern in the country, although in the past trains were seen as a safer transportation option than trucks. That has changed, however, as robbers and organized crime gangs have increasingly targeted all forms of transportation. In October, Ferromex said the number of attacks on freight trains in Southern Mexico had lately increased to as many as 16 a day. The railroad said Thursday that since January there have been 1,986 attacks against trains on its 10,000 kilometers (about 6,214 miles) of track in Mexico.

Late last year, the Mexican legislature passed a law making the robbery of a truck or cargo a federal crime, with harsher penalties than before: those convicted now face six to 12 years in prison, regardless of the amount stolen, said Molina. The law garnered support after a sustained lobbying effort by trucking groups, he added.

“It will be interesting to see how long the rail industry will wait to have them included in this, or a similar law,” Molina said, adding that one reason trains are vulnerable to robberies is the “very low average speed of freight trains in Mexico — around 50 kilometers an hour,” or about 31 miles per hour.

How to Improve OTIF: 15 Tips for On Time and In Full Delivery
END_OF_DOCUMENT_TOKEN_TO_BE_REPLACED