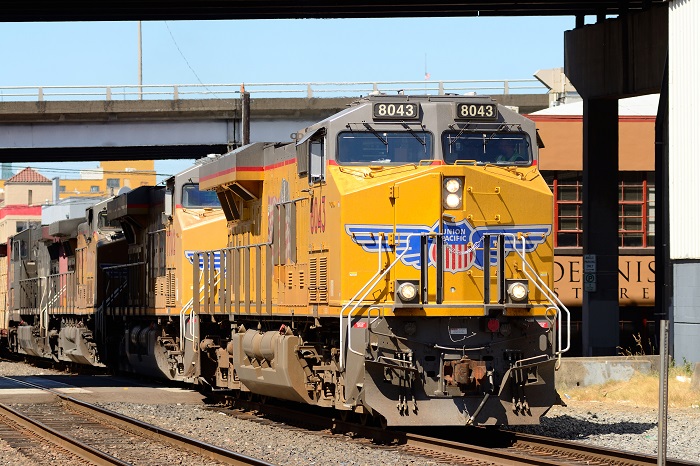 Although US railroad service has improved slightly since late March, fewer shippers have a positive view of their intermodal providers, and lawmakers on Capitol Hill questioned whether the freight carriers are more concerned with operating ratios than a high-quality product.

In a survey from Cowen & Co., shippers gave higher unfavorable marks for Canadian National Railway, Canadian Pacific Railway, Union Pacific Railroad, and Norfolk Southern Railway in the first quarter versus the end of 2017. While 52 percent of shippers still ranked service as excellent or good, the total is a decline from 60 percent in the fourth quarter.

More than half of shippers described service as “fair” or “poor” on CSX, CN, CP, and NS, and 47 percent on UP. Only CSX cracked the 50 percent mark in December. Fewer shippers reported CSX Transportation had poor service this winter, although the negative reviews were elevated in 2017 as service deteriorated in the initial months under the late-CEO E. Hunter Harrison.

All the Class I railroads struggled though to manage additional freight this winter as shippers looked for alternatives to the limited supply of trucks. Railroad speeds slowed 4 percent, according to the American Association of Railroads, and containers piled up at the rail ramps in the Midwest, Mid-South, and Southeast US. Train arrivals were often unpredictable and the cargo frequently idled with draymen refusing to handle regional hauls requiring an electronic logging device (ELD).

Regardless, the railroads continue to have an opportunity to win new business with the available supply of trucks being so low.

The Trucking Conditions Index in February from FTR Associates was the highest level since its inception in 1992. The Cass Freight Index showed shipments rose 11.9 percent and expenditures jumped 15.6 percent year over year. DAT Solutions reported the flatbed load-to-truck ratio was 103 for the week ending April 14; in other words, there were 103 loads for a single truck listed as available — one of the highest totals in history. The Truckstop.com Market Demand Index is hovering between 50 and 60, double the levels of 2017.

“We are approaching record level spot rates, freight demand remains elevated, and the economy continues to grow at a good pace. If there is any frustration, it is having to turn away loads due to a shortage of drivers,” FTR chief operating officer Jon Starks said.

Shippers have started to view railroads as a capacity alternative in the current market rather than a cheap option, according to Shelli Austin, president of Intek Freight and Logistics.

But the railroads simply could not handle the additional volume and the winter weather together.

CN, CSX, UP, and BNSF restricted draymen from returning containers or otherwise made operating adjustments to survive the height of the congestion in Chicago, and trucking companies instituted surcharges on shippers because of the long lines.

Fortunately, shippers have seen service slightly improve over the last three or four weeks as the stress on the network over the first 10 to 12 weeks eased after the Lunar New Year and flatness in demand in March.

Freight can still be lured from highways, if reliable rail service exists

If shippers were to sustain a better customer experience, there is freight available to poach from the trucking industry. Cowen’s survey found that three out of every four shippers were willing to shift up to 5 percent of freight onto intermodal rail if the service were reliable. The most common reasons were concerns over the ELD mandate in the trucking industry and tight capacity in the US truckload market.

“With rail service not being where it needs to be, that incentivizes shippers to move their goods on trucks, even in a very tight truck environment. Shippers are willing to pay for service. Even in a tight trucking environment, with rail service not being consistent or predictable ... that limits how much intermodal can grow until the railroads address this problem,” said FTR senior transportation analyst Todd Tranausky in an April 12 webinar.

Railroads blame much of the delays on cold temperatures and snowstorms battering their networks, although shippers believe the problems are more complex than inclement winter.

Skeptical congressmen also questioned the core motivations of the Class I railroads during a subcommittee hearing April 17 on reauthorizing the Surface Transportation Board (STB). US Rep. Mike Capuano, D-Massachusetts, suggested railroad executives are more concerned about returning profits to shareholders than providing exceptional service.

“Some of the vultures of Wall Street have decided to come into the rail industry,” Capuano said during a hearing of the House Subcommittee on Railroads, Pipelines, and Hazardous Material. “They do to the rail industry what they did to others, which is strip it down and ruin it for all the other people trying to do the right thing. [They do it] just to make a quick buck without any consequences whatsoever, without any concern what happens to those who depend on this monopoly.”

The ones that depend on the monopoly are the shippers, which share these worries about their railroad partners both privately and publicly.

“There is a fundamental concern among rail customers that the underlying root cause of these service and accessorial charge-related issues is Class I railroads’ aggressive effort to reduce their operating ratios to impress Wall Street investors and shareholders,” the National Grain and Feed Association wrote in a March 10 letter to the STB. “This, in turn, has resulted in the systemic shedding of resources by Class I carriers, including locomotives and crews, that has degraded service to unacceptable levels, and resulted in virtually non-existent surge capacity to meet rail customers’ needs.”

During the hearing, Rep. Peter DeFazio, D-Oregon, cited the work of Mantle Ridge — a private equity group — to install Harrison into CSX’s top job as an example of big-money Wall Street's intrusion to shift the focus of a railroad from service to margins.

In the Cowen survey, 65 percent of shippers were concerned about the ability of the railroads to take on additional freight, a startling jump from the 45 percent in December and the 30 percent one year ago.

“Of this group, manpower and equipment are of equal concern. Concerns over equipment dropped from last quarter but manpower responses were up significantly from our prior survey. This is likely due to the thousands of layoffs we’ve seen at the rails in recent quarters and some of the negative service issues,” wrote Cowen and Co. analyst Jason Seidl.

The Class I railroads vehemently disagree with suggestions they are mute to the concerns of shippers or incapable of providing exceptional service.

CN interim CEO Jean-Jacques Ruest in March outlined a plan to restore high-quality service to the network through the purchase of 200 railcars, new locomotives, additional sidings on the West Canada-to-Chicago corridor, and the hiring and training of new conductors.

At the Port of Prince Rupert, Canada, where crippling delays this winter trickled all the way to Chicago, congestion has dissipated in the last four weeks and returned to normal.

CSX wrote in a March 28 letter to the STB that its metrics are better than one year ago, although the year-over-year comparison will soon go up against a major disruption that frustrated shippers last spring and summer. In its first-quarter earnings report, CEO Jim Foote said the company had a very good quarter even though total volume was down 4 percent (intermodal volume was flat) and total revenue of nearly $2.9 billion was essentially unchanged year over year. Profits grew because CSX improved its operating ratio 570 basis points to 63.7 percent after slashing costs 13 percent year over year, mainly due to the layoffs announced in February 2017.

"We are drastically operating the way we operate by taking millions of unnecessary steps out of the business process that we use to run the railroad. This is producing record operating performance, improved customer service, and when combined impressive returns to shareholders," Foote said in an April 17 earnings call.

To be fair, a review of the Bloomberg News transcript of the call shows that CSX referenced customers 32 times and only mentioned operating ratios or shareholders eight times. Several of the references to customers, though, were about raising accessorial charges when beneficial cargo owners leave containers sitting in the yards.

"We're really trying to change the behavior of the customers so that we get into seven-day-a-week service, we get into balance, we get into the things that scheduled railroading is all about. And in some respects, we need the customers help in turning cars fasters, so this is really intended to be a behavior changer," said Frank Lonegro, chief financial officer.

UP CEO Lance Fritz told the STB that it has reactivated about 500 high-horsepower locomotives since mid-2017, including 100 since early February, and will be purchasing 56 new units as part of the capital budget. Fritz wrote that UP will hire 2,100 track, engine, and yard employees, restore furloughed employees to their jobs, and graduate 200 trainees each month between March and July to be deployed into the field.

NS CEO James Squires also acknowledged in an April 2 letter to the STB that “our local performance is currently 7 percent below where we typically perform.” NS resumed service on a route between Macon, Georgia, and Birmingham, Alabama, which previously was ceased in early 2017 to restore service and leased 90 locomotives, of which 27 have been received and 22 are in service.

KCS CEO Patrick Ottensmeyer discussed the lease of 25 locomotives at the end of 2019.

CP CEO Keith Creel wrote that the railroad will take possession of 110 remanufactured locomotives, of which 30 are already delivered and 80 will arrive before the end of August. He also set a goal of hiring 150 more employees to beef up staffing levels in Chicago; St. Paul; Enderlin, North Dakota; and the Quad Cities, Iowa.

If shippers were paying less for substandard service, then that might have quelled some of their outrage. But prices are rising and will likely continue upward for the rest of the year, according to FTR, Cass, and Cowen forecasts.

The Cass Intermodal Price Index increased 5.8 percent year over year in March, and eclipsed 5 percent in each of the first three months of the year. The intermodal index rose to 143.2, setting a new all-time high.

“The 11.9 percent YoY [year over year] increase in the March Cass Shipments Index is yet another data point confirming that the strength in the U.S. economy continues to accelerate. This level of percentage increase is usually only attained when emerging from a recession, not when comping against already strong statistics,” said Donald Broughton of Broughton Capital, the report’s author.

In the Cowen survey, shippers forecasted that intermodal prices will increase 3.8 percent in the next six to 12 months, higher than the 3.5 percent increase offered when the same question was asked last December. It is the first time the result has been above the long-term average of 3.7 percent since the middle of 2015.

“The 3.8 percent price increase expectation leaves additional breathing room from the all-important 2 percent rate. That 2 percent is important because rail-cost inflation typically hovers in that area and pricing will need to remain above that level in order for the rails to improve their operating ratios. The 3.8 percent is also the first time in almost three years that we've seen a result above the long-term survey average of 3.7 percent,” Seidl said.

FTR’s forecast calls for a 5 to 10 percent increase in costs before the end of the year, although the current hikes are more than 10 percent.

“As we get to the back half of the year, that is in-line with what we are forecasting. But if you’re looking in the near term, it’s probably more like 10 to 15 percent,” Tranausky said.

The pricing power is simple economics.

Since volume is spilling over from the US truckload industry into the less-than-truckload and railroad sectors, there is enough demand to justify rate increases.