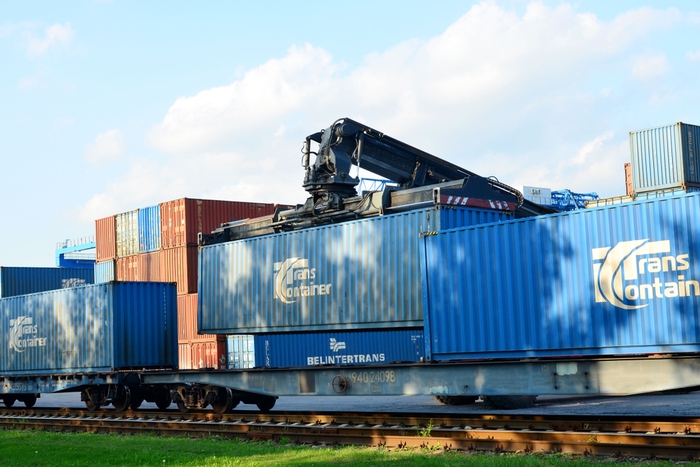 Electronic seals are required to be fitted to containers entering Russia and removed when the box leaves the country, but there is no clarity yet on how the process and the logistics of the seals will be handled. Photo credit: Shutterstock.com.

VENLO, The Netherlands — Russia’s withdrawal of sanctions banning the transit of European food and agricultural products through its territory will increase the rail freight market on the northern route to China by up to 80,000 TEU a year, according to rail operator and forwarder RTSB.

The sanctions were lifted on July 1, after being in place since 2014 when they were imposed in retaliation for European Union sanctions. It is a move that RTSB project manager Kateryna Negrieieva believes will drive up volume on the Europe to China rail route.

“The market could be immense. We are expecting an increase per year of between 50,000 TEU and 80,000 TEU,” she told the European Silk Road Summit. RTSB handled 2,000 block trains in 2018, and the market was developing strongly.

“Forwarders need to be prepared for this. China is the biggest importer and exporter of pork meat, but a disease affecting pigs has led to a big shortage of pork in China and the price has increased by 40 percent. China is looking for other sources of meat in Europe and other countries, so the demand is high.”

Hanno Reeser, board member of New Silk Way Logistics, said with the lifting of Russian sanctions on transit cargo, a large focus of his forwarding operations was on eastbound cargo to China.

“It is a big opportunity for European companies to grow their volume to the Asian market, and the market is increasing rapidly,” he said during a panel discussion covering cargo transit through Russia.

“We are expecting a huge increase and that will help us to improve the imbalance between east and west. The customer will benefit because if the eastbound volumes increase, the rates will drop,” he told attendees.

No clarity on seals

But the optimistic predictions of rising volume transiting Russia to supply hungry markets in Asia have been tempered by regulatory uncertainties surrounding the handling of the cargo.

Each container entering Russia will need to be traceable the entire journey and fitted with an electronic seal. That seal will have to be removed when the container leaves the country at the other end.

Negrieieva said the problem was that no process has yet been established to manage the seal logistics, and there was little information available to the market.

Further complicating the process is that most of the cargo transiting Russia will be transported in reefer containers where the temperature control is managed via GPS and will need to be linked to the Russian satellite system.

This was something Khalaji said was not going to happen. “I am quite sure the Russian authorities will never allow us to connect our GPS devices to their system,” he said.

As if that was not complicated enough, the organization appointed to manage the electronic seals process was a company called RT-Invest. One of the two major shareholders of RT-Invest is Russian state-owned military-industrial company Rostec.

Sebastiaan Bennink, partner at Wladimiroff Advocaten, a law firm based at The Hague, said Rostec was one of the companies sanctioned by the United States following Russia’s annexation of Crimea and its invasion of Ukraine in 2014.

“It might be that at the border with Russia when your cargo is sealed and you are paying for that process, your US or European bank may not process the payment,” he warned attendees at the Silk Road Summit.

“It also cannot be excluded that your data and your goods will be traced by a military company and that data will be stored for further use by the Russian government.”