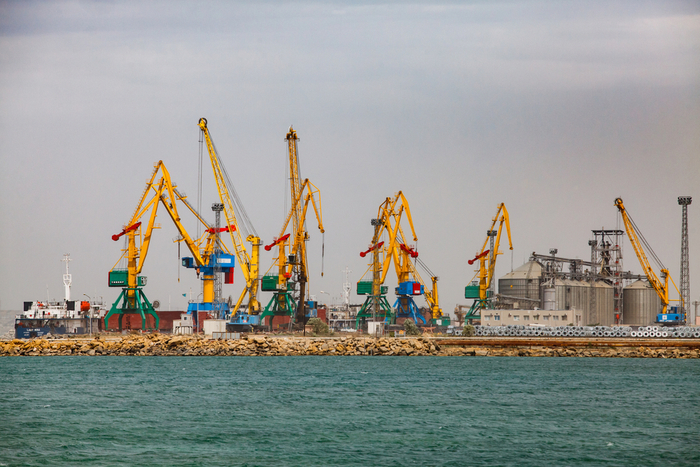 Cargo handling infrastructure shortcomings on the Caspian Sea are delaying container shipments and adding to transit times along the middle corridor between China and Europe. Photo credit: Shutterstock.com.

Volume transported on the China-Europe rail network will plummet this year, erasing years of throughput gains that could take up to three years to recover, delegates at a rail freight conference in Brussels heard Wednesday.

Reluctance by shippers and their service providers to send cargo through sanctions-hit Russia following its Feb. 24 invasion of Ukraine has slammed the brakes on a trade lane that expanded by almost 30 percent in 2021.

“We will stick to this pattern [of declining volume] for the next two to three years,” Jacky Yan, managing director of China-based New Silk Road Intermodal, told the Rail Freight Summit. “Even when the war is over it will take time to get back to those [2021] volumes.”

In 2021, 1.46 million TEU was transported via the China-Europe rail network, according to China National Railway Group, but Onno de Jong, senior consultant for transport, infrastructure, and mobility at European research consultancy Ecorys, said there would be a “massive decline” in volume this year.

If the volume figures available for January and February are any guide, de Jong said the total volume handled by the rail network this year would be about 520,000 TEU, a decline of 35 percent.

More than 90 percent of all rail cargo from China to Europe is transported via Russia and Belarus. However, in the days following Russia’s invasion, a host of global forwarders announced a stop on handling rail freight that traveled via Russia and Belarus, in addition to their suspension of all cargo bookings to and from both countries. Among those forwarders were Kuehne + Nagel, CEVA Logistics, DHL, and DSV. Maersk has also suspended moving rail cargo through Russia.

Estimates at Wednesday’s conference of the decline in volume through March from the suspended rail services ranged from 50 percent to 80 percent year over year.

The rail freight shipped between China and Europe in 2021 was 4.45 percent of the total Asia-Europe ocean containerized trade of 32.8 million TEU in 2021.

The railfreight.com conference exposed the ethical dilemma faced by European shippers importing goods from China by rail. Despite steadily toughening sanctions on Moscow by the European Union — a fifth round of sanctions was being prepared in Brussels Wednesday — the sanctions do not yet apply to the transport of goods through Russia or Belarus to a third country.

However, considerable insurance challenges exist in covering shipments through the two countries, and it was difficult to find insurers to cover policies related to Russia, said Crystal Lei, sanctions compliance officer at Ping An (Insurance) Group of China.

But Lei said getting that coverage signed off was a problem. “We have studied the possibility of providing war and strike insurance coverage, but we need the western reinsurers to co-insure with us,” she said. “We have talked to the reinsurers, but they are very reluctant to provide that cover.”

“We expect after the conflict ends the volume will increase again, but it is really hard to clearly understand what is going on regarding the impact of sanctions,” he said. “It makes business worry about transactions and insurance of goods. Before the main issue was infrastructure limitations, but now it is sanctions.”

With so much volume exiting the northern corridor, the most talked about alternative to routing cargo via Russia is the middle corridor through the Caspian Sea or Black Sea and on into Europe, either by train, short-sea shipping, truck, or a combination of modes. But speakers at the conference did not believe a route that only handled about 80,000 TEU in 2021 could provide an immediate solution.

Yan said “for the time being” he did not regard the middle corridor as a viable alternative to the huge volume shipped to the north.

“Compared with the northern route, the costs are much higher and transit time is long,” Yan said, pointing out that where the northern route was less than two weeks, it took more than 40 days to send cargo via the Caspian Sea and Turkey to Europe. “So it is not competitive with ocean.”

While no rate levels were provided at the conference, a delegate said the rates per FEU railed through the middle corridor would be at least 20 percent to 30 percent higher than cargo taking the northern route.

Uwe Leuschner, CEO of rail consultancy FELB Group, said another major issue that reduced the efficiency of the middle corridor and contributed to the cost and delays was the multiple handover points.

“In the middle corridor you need to communicate with Kazakhstan, with someone in the Caspian Sea, with Azerbaijanians, Georgians, whomever in the Black Sea, with Turkey, Romania,” he said. “There are so many more interests that need to be brought into the product.”

Leuschner said the middle route could be a solution in the next few years, but not now and not at the volume the market is expecting.

Alexander Hau, product manager for intercontinental rail at Maersk, said there was pressure building on the middle corridor to improve its capacity, but he added that five years ago the transit through Russia was also not at acceptable service levels.