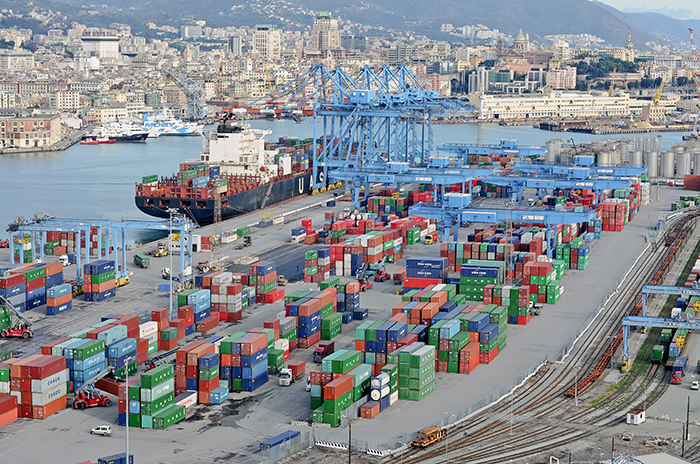 Total container traffic at the Port of Genoa rose 14.1 percent in 2017 to 2.6 million TEU, according to port statistics. Photo credit: Shutterstock.com.

Asia-Europe shippers are taking a closer look at southern European ports as intermodal bottlenecks continue to slow container delivery through some of the giant North Europe gateways, with reports of savings of roughly $30 per TEU and more balanced spot rates.

Persistent barge delays through Europe’s two busiest container ports, Rotterdam and Antwerp, continue to frustrate shippers. The latest congestion update from intermodal operator Contargo reports that Antwerp barge waiting times are currently 24 to 48 hours, and at Rotterdam are 12 to 96 hours.

This adds to the standard transit time offered by carriers on the Shanghai-to-Rotterdam route, which for Maersk Line is 26 days compared with 30 days to Genoa, and for CMA CGM is 28 days for Shanghai-Rotterdam and 31 days to Genoa.

The supply chain heads from two global shippers told JOC.com that they have been looking for alternative routes into Europe, and their inquiries to carriers have been coming back with encouraging results.

“A lot of carriers are pushing the Mediterranean to us and the deals are getting interesting. A year ago the same deal would have been more expensive via Northern Europe but now the Mediterranean deals are looking good,” the supply chain director of a global wholesaler told JOC.com.

He said a recently completed analysis on the price difference between northern and southern ports found that end-to-end it was $28 more per TEU from East Asia to Hamburg compared with the Mediterranean.

The Mediterranean has gained 1.1 percentage point of market share in imports from Asia for 26.9 percent from 2013 to 2017, according to data from Container Trade Statistics.

A logistics executive for a Europe shipper, which ships about 5,000 TEU through Mediterranean ports, said services from carriers was definitely putting the Mediterranean routing more on his radar, but he said the price differential and transit time was not yet large enough for him to shift more volume from Rotterdam.

“I look at the overall price of getting my container from Shanghai or Yantian to my warehouse in Europe — am I faster, am I cheaper,” he told JOC.com. “It is roughly around $50 per TEU more for me to use Antwerp or Rotterdam than the Mediterranean. If it was $500 through Genoa and $2,000 through Rotterdam, no problem. But for less than $50 a box it does not yet make sense for me to move.”

While the market share of Asia containerized cargo at Mediterranean and North Europe ports has remained largely static for the past few years, record growth in volume at both regions was reported last year, a trend that continued through the first quarter and is putting pressure on inland connections.

By the end of 2017, the five top northern range ports had handled 3.2 million more TEU than in 2016, and the year-over-year volume kept increasing in the first three months of 2018. Rotterdam was up 6.1 percent to 3.5 million TEU, while Antwerp’s first quarter volume was up 10.7 percent to 2.7 million TEU.

In the Mediterranean, the five busiest ports handled 2 million more TEU in 2017 than in the previous year. First-quarter 2018 volume at Genoa was up 9.2 percent to 664,000 TEU, and Barcelona grew its throughput 20 percent to 1 million TEU.

To cope with the rising volume, new weekly rail services to the hinterland markets of Central and Eastern Europe are being introduced at Italy’s Genoa, La Spezia, Trieste, and at Slovenia’s fast growing hub of Koper. Rail infrastructure improvements will boost capacity at the Milan hub on the key Rhine Alpine Corridor linking Italy with Switzerland and Germany.

Accompanying the improving services are more balanced spot freight rates on the China-North Europe and China-Mediterranean routes. In the past seven weeks, the difference in the average rate to ship a TEU via Northern Range ports compared with South Europe was just $38 per container, with the Mediterranean providing slightly more expensive services. Looking back 12 months, however, the Mediterranean spot rates have regularly been below those from Asia to North Europe.

To test the price differential between two North Europe ports (Antwerp and Rotterdam) and two Mediterranean ports (Genoa and Koper), using road and rail transport, the University of Antwerp’s Department of Transport and Regional Economics took data compiled over several years and analyzed it in a chain cost model.

The findings of the analysis show that transporting a container by road from Genoa to Basel in Switzerland will cost $511 per TEU, far cheaper than the road option from Rotterdam-Basel that will cost $994 and Antwerp-Basel at $907.

Rail transport along the Rhine-Alpine corridor from Genoa to Basel costs $624 per TEU, while the cost from Rotterdam for the same mode is $788 and $743 per TEU from Antwerp.

Obviously the type, volume, and distance that cargo has to be transported will largely determine which mode is chosen by shippers and their forwarders, but the enormous increases in containers being handled by the gateways and the resultant congestion is making cargo owners come up with different strategies to better manage risk.

“Instead of moving all cargo through one corridor, shippers should really be spreading the risk, especially during peak season,” said Daniele Testi, marketing and communications director for Contship Italia, which operates Italy’s La Spezia port and the rail hub in Milan.

“Having an alternative plays a big role here. If you can split volume by different routings then you can manage the risk. Without that alternative you will struggle to move your containers when there is disruption, and with the rising volumes coming into Europe from Asia there is always a chance of disruption.”

One Mediterranean port that has captured a growing share of the Central and Eastern Europe market is Koper in Slovenia. The port is called at by 2M’s Maersk Line and Mediterranean Shipping Co. and the Ocean Alliance of Cosco Shipping, CMA CGM, OOCL, and Evergreen, and being the first port of call on their Asia-Mediterranean strings that use 8,000-14,000 TEU vessels, the container exchanges per ship are often around 5,000 TEU.

Koper is nearing the 1 million-TEU annual throughput mark, which it might even hit this year. But as with gateway ports across Europe, the rising volume is bumping up against limited space.

“We are facing space constraints because of the high growth, and that requires a lot of effort from the operations people,” Miha Kalcic, container terminal sales manager for the port, told JOC.com. “If container volume grows at 8 percent a year, we could be facing issues in two to three years time. But that is why we have invested a large amount in the railway tracks where we are currently at 80 trains a week when we can handle 120 trains, so we still have capacity for now.”

The Port of Genoa is facing similar rail infrastructure challenges. Renato Mazzoncini, CEO of state-owned rail infrastructure manager Ferrovie dello Stato Italiane, said, “Genoa is growing its volume at double digits a year, so we need to find a way to shift freight from road to rail.”

“Italy is trying to address the bottlenecks at several of its ports that are usually found at hand-over points between the ocean terminals and the road and rail,” said Maurizio Gentile, CEO of Italian railway network RFI.

A spokesperson for the Port of Genoa told JOC.com that throughput was growing steadily and in 2018 was expected to increase by as much as 10 percent.

“Inland connections are the challenge. The port is between the sea and the mountains and the capacity of the existing rail links is not enough to cope with the huge amount of volume,” the spokesperson said.

Italy is investing large sums to meet that demand, spending €6 billion on a high capacity rail link from Genoa to Milan that will serve the German market and be completed in 2022.

Europe rail to truckers: Work with us, not against us