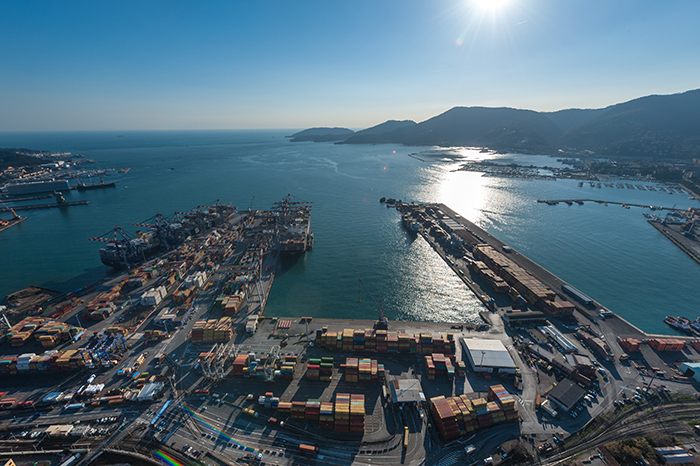 Contship Italia expects the number of containers moved on its intermodal service from the southern gateway ports to Switzerland to reach 12,000 this year, a rise of 70 percent on the volume handled on the service last year.

The Italian operator of container terminals and intermodal cargo solutions says demand for the port-to-door service that started five years ago and links the ports of La Spezia and Genoa with Basel is growing because beneficial cargo owners (BCOs) are taking the opportunity to limit risk of supply chain disruption by splitting shipment volumes from Asia to Europe.

“BCOs shipping from east of the Suez Canal can divide shipments between different transport corridors and so reduce the risk of supply chain disruption. They move a certain percentage of cargo via the south, which complements the volumes they already move via Europe’s northern ports,” said Daniele Testi Contship’s director of marketing.

The potential for shorter transit times and inventory cost reduction is also behind growth in the service, Testi said. The company calculates that on a shipment from Hong Kong to Basel, BCOs can realize inventory cost savings of around $544 per FEU and a transit time saving of 16 percent compared with shipping by ocean and rail via Rotterdam.

Shanghai Shipping Exchange (SSE) indices show average spot rates for the Asia- Mediterranean trending lower than the Asia-North Europe since September of last year, a factor also believed to be contributing to higher volumes on the service. The most recent Asia-Mediterranean spot rate of $593 was $98 lower than the Asia-Europe rate, according to the SSE’s Shanghai Containerized Freight Index as displayed on JOC.com’s Market Data Hub.

“In the past there was some reluctance to use Mediterranean ports. There was a perception of lower productivity and issues with labor, but this is no longer the case and we expect the port-to-door services to inland destinations in southern and central Europe to continue to grow.”

Shipments on the service are offloaded at La Spezia and Genoa and transported by rail to the 300,000 TEU-capacity Contship CY Depot in Milan where they are transshipped to international rail services.

Contship operates its own trains in Italy with 4,500 kilometers (2,796 miles) of live coverage.  From December 11, five weekly roundtrip services will serve the route to Basel from the Milan depot.

In addition to Basel, there are also routes to Munich and Duisburg in southern Germany.

“Duisburg is becoming more important as a hub for overland shipments to and from China,” said Testi.

The high level of growth on the service this year follows year-over-year growth of 180 percent and 40 percent in 2016 and 2015, respectively.

Around one third of containers moved out of La Spezia currently go by rail and the target is to raise that to more than half of the total volume of containers handled by the terminal.

“This is where we are trying to make a difference for shippers.  We want to move the containers out of the port as quickly as possible.  This is the only way to cope with massive stevedoring demand in a compact terminal.  With higher speed to turnover shipments, we can offer more capacity to the market.”

Testi said the trend of terminal operators looking further up the supply chain combined with the influx of larger tonnage and resulting fewer port calls is making port productivity more important to the industry.

“In the past you had more flexibility because you had more calls.  Today it is different.  Sometimes events out of the control of the terminal, such as weather or an issue at another port, can impact shipments and you need to be able to anticipate and respond to the issue in a live environment.

“For this you need better communication, collaboration and increased sharing of information and data in the supply chain.”

La Spezia is located on the Ligurian Sea, midway between Genoa and Pisa.  The port is currently in the middle of a $240 million expansion project that will see its Garibaldi pier extended by 82 meters (269 feet).  The full project involves construction of a new on-dock rail and will take capacity from 1.4 million to 2 million TEU annually.

More than 80 percent the port’s imported container volumes come from Asia, including the Far East, Southeast Asia and the Indian Subcontinent.  The United States accounts for around one third of exports, with another third destined for Asia and India.