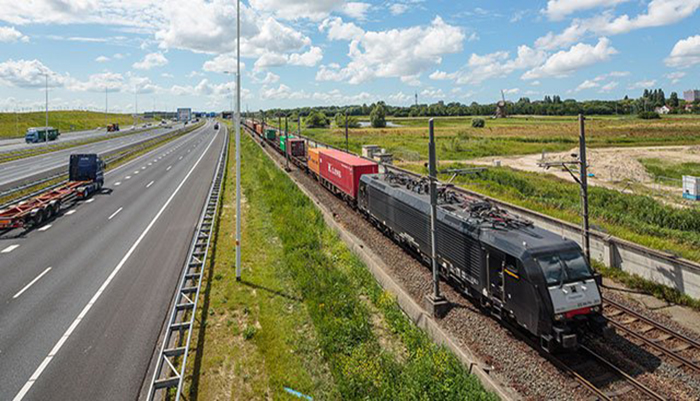 Without freight trains like this one, the port of Rotterdam would need an additional 840 trucks to handle the cargo surge from an 18,000-TEU ship.

LONDON — Beyond the headline-grabbing opening of the world’s longest rail tunnel under the Alps, Europe’s rail freight industry is still losing market share to road transport despite the European Union spending 28 billion euros ($31 billion) on rail projects between 2007 and 2013. But improvements in routes connecting to ports provide a path for rail carriers to stem or even reverse the tide.

Deutsche Bahn, Europe’s largest railway company, with cargo operations in several countries, pinned most of the blame for its 2015 loss of 1.3 billion euros — its first deficit in 12 years — on its domestic freight business, which saw revenue shrink by 10 percent.

Rail’s overall performance “remains unsatisfactory” with the average speed of freight trains just 18 kilometres (11.25 miles) an hour on many international routes, the European Court of Auditors said in a report in May.

“A single European railway is still a long way from being achieved ... the EU rail network by and large remains a system of separate national networks, with various national authorities and very different rules governing path allocation, management and pricing,” the report found.

The 36-mile-long Gotthard Tunnel, which is scheduled to start commercial operation at the end of the year, is part of that effort to create a unified European rail network. It promises a major shift of cargo away from trucks that are clogging the continent’s congested highways and will trim transit times for containers on the key Rotterdam-Basel-Genoa container route, helping divert some cargoes to south European ports that currently pass through the dominant Le Havre-Hamburg port range.

“Traffic management procedures are not adapted to the needs of rail freight, even within rail freight corridors: freight trains are charged for every kilometer of rail infrastructure they use. This is not always the case for road transport.”

“Extra funding will not resolve the problem by itself if strategic and regulatory issues are not addressed,” according to Ladislav Balko, one of the authors of the report.

“The rail system suffers from a number of hurdles and obstacles that grow over time, burdening especially international transport,” said Bernhard Kunz, managing director of Hupac, a Swiss combined transport firm. “If we want to keep up with the road, standards have to be simplified and harmonized across Europe.”

The rail industry is, however, making inroads into the container market, albeit as a junior player to road transport, which still dominates the movement of traffic between European ports and their hinterland destinations.

“An increasing number of short-distance container trains to and from major box ports are meeting both the shippers’ preference for fast pre-carriage and post-carriage and the ports’ need to minimize the landside congestion,” according to Drewry Supply Chain Advisors.

Shippers have opted for trucks because they find rail transport too slow, too infrequent or not cost competitive for distances under 300 kilometres (187.5 miles). Container trains in Europe also are much shorter than in the U.S. and subject to restrictive regulation of their paths.

“But rail container shuttles to and from major box ports are now handling large volumes of containers and replacing the omnipresent trucks even on distances of 300 kilometres or less,” according to London-based Drewry.

Trains are the ideal choice for terminals struggling with landside congestion due to the cargo peaks resulting from the accelerating deployment of mega-ships. Rotterdam, Europe’s largest container port, said a typical ship of 18,000 twenty-foot-equivalent units requires 19 trains with capacities of 74 TEUs, 32 barges with capacities of 97 TEUs, and 1,560 trucks with capacities of 1.6 TEUs. Without the trains, the number of trucks required would soar to about 2,400 per vessel call.

Most individual shippers don’t have sufficient volume to justify a dedicated container train, but either the shipping line, the terminal or train operator can aggregate volumes and provide common-user trains, Drewry said.

The major players in container shipping are investing in rail to improve port/hinterland transport. APM Terminals, the Maersk Group’s port arm, added an on-dock rail terminal alongside a barge terminal at the world’s first fully automated terminal in Rotterdam with the target of transporting 55 percent of its hinterland traffic.

The Rotterdam port authority recently unveiled a 275-million-euro project to reroute 2.5 miles of rail track away from a bridge so that rail and shipping traffic “will cease to get in each other’s way” as volume rises on a 100-mile double track freight rail connecting the port with the German rail network.

The Rotterdam-Bayern Express service operated by ECT, a leading Rotterdam terminal operator, and TX Logistik, boosted traffic with southern Germany by 50 percent in the first half of the year. Much of the new business has been lured from Hamburg and Bremerhaven despite the same transit time between the German ports and Rotterdam as more and more shipping lines are choosing the Dutch port as their first and last port of call in Europe, the Rotterdam port authority said.

Rail traffic to and from Felixstowe, the U.K.’s largest container port, hit a record 936,000 TEUs in 2015, nearly a quarter of the port's total capacity of some 4 million TEUs, and is still growing with the recent launch of the port’s 32nd daily service. The port also set a record for containers handled in a single day in May with 2,607 containers (4,185 TEUs).

HHLA, Hamburg’s largest container terminal operator, spent more than half of its investment in 2015 on expanding its rail operations and inland hubs as its ocean traffic is hit by shrinking Chinese imports and slumping Russian feeder shipments. While terminal volume dived more than 12 percent last year to 6.6 million TEUs, intermodal traffic was up 2.7 percent at 1.32 million TEUs and is expected to post a “slight” increase this year while ocean volume stagnates. “We will expand the network of our intermodal companies by operating new connections for European port hinterland and continental traffic,” said Klaus-Dieter Peters, chairman of HHLA’s executive board.

But even as rail’s popularity with shippers and terminals grows, it is facing a tough new challenge due to the cargo peaks caused by the deployment mega-ships.

Even Hamburg, which relies on trains to carry almost 50 percent of its containers into its hinterland, is under pressure. “Large ships put a huge strain on the inland transport system, especially the rail system,” said Stephen Behn, a member of HHLA’s executive board. “We have a lot of cargo going from and to the port by rail and for a large vessel coming from the Far East we normally have 53 trains, as an average, waiting for that cargo,” he told the recent TOC Container Supply Chain conference in Hamburg.

“Everybody wants more cargo on the rail, but it’s a big problem if we have 53 trains on Monday and Tuesday, but none on Thursday and Friday.”

The growth in container rail services between China and European ports and inland destinations in recent years has raised the industry’s profile, but the volumes transported are a pinprick compared to the traffic on the Asia-Europe shipping lanes.

And there’s no likelihood Europe’s rail freight system will ever match the U.S. model.