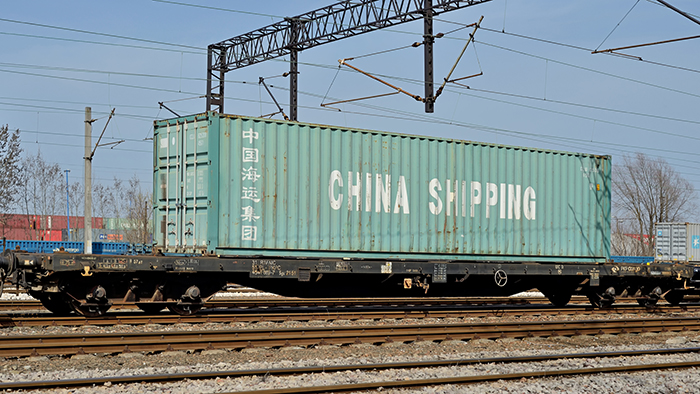 Containerized rail between China and Europe has evolved from a niche option with infrequent service and a small network, serving major high-value and time-specific shippers, to one attracting suppliers and second-tier companies with more and faster services to a wider array of destinations.

The vast majority of services are still block trains where the entire train is booked by one customer and bonded for the journey. Forwarders offer less-than-containerload cargo services, but availability is limited. That’s changing, though, as more services come online, their frequency and speed increase, and rail operators on the route expand their networks. Cargo clearance has also improved and so has security, particularly through Russia, thanks to forwarders offering real-time GPS tracking, monitoring, and intervention for shipments, with some systems notifying shippers if the seal on their container is damaged or broken.

David Smrkovsky, strategic procurement manager at HP, recalls “the beginning when there was nothing,” forcing the computer producer to work with rail operators, customs authorities, and others to build its own block train, with the first train leaving Chongqing for Duisburg in 2011. Now, the China-Europe rail connects 15 Chinese cities and 16 European services, with the latest being London after a train headed for the industrial center of Yiwu in the Zhejiang province in eastern China left DP World’s London Gateway terminal on April 10. And exporters in Japan, South Korea, Taiwan, Hong Kong, and Vietnam can tap forwarders’ ocean-rail service combos via Chinese ports.

How much of a threat the China-Europe rail option is for air cargo carriers and, to a lesser degree, container lines, is debatable. Proponents said it’s better poised to attract cargo away from freighters and the bellies of cargo planes, as the shippers are moving pricier goods with firmer deadlines for delivery on rail, rather than on ocean. But as rail services quicken and mushroom, some see an opening for shippers to shift goods from the water to the track, particularly if ocean freight rates rebound and slot space gets tight, as it is now for the backhaul from Europe to Asia.

As a result, in the last few months, forwarder Dachser “suddenly saw a surge of interest in rail from shippers that could not move cargo by sea,” Edoardo Podesta, managing director, air and sea logistics for Asia Pacific, told JOC.com.

There’s limited capacity on the rails, with each service generally handling just 45 feus. Even at full use, the network could only handle between 500,000 and 1 million TEU, according to an Organization for Economic Cooperation and Development (OECD) report. Comparatively, the largest container ship traversing the Asia-Europe trade has a capacity of up 22,000 TEU.

The number of routes, operators, services, and destinations make it a challenge to estimate total China-Europe landbridge volume, but the number of new services and increase in frequency show volume is rising, with transport providers and forwarders expecting more. Rail provider Eurasia Express Bridge, for example, has increased its weekly block train services from China to Europe over the last several years from 2 or 3 to 10 or 12, said Ken Asztalos, executive director of AFMS Logistics Management Group, which assists beneficial cargo owners (BCOs) in tapping the services. The services are also getting faster, with westbound transits averaging 12 to 15 days, compared with 25 days a few years ago, he said.

“Service has improved by the usage of better locomotives on the China side and investments in rail infrastructure in China,” said Asztalos,who added that rail gauge changes in Poland and Kazakhstan now take two hours, a quarter of the time spent years ago. “Congestion problems at these border crossings also improved where we see no impacts anymore today. Next to that, the Russian customs unity between Belarus, Kazakhstan, and Russia has improved transit times due to less customs paperwork and procedures.”

Those service improvements are making rail more attractive to shippers of industrial equipment, auto parts, and electronics. These are shippers that can’t work with the more than 50-day ocean transits, but can manage their inventories with rail transits as short as 12 days, depending on the origin and destination. That gives shippers more working capital by allowing them to raise cash sooner by making goods available for sale faster and respond to trends and restock shelves faster. With temperature-controlled service offerings, rail proponents see more potential for moving food stuffs, in addition to keeping heat-sensitive electronics cool.

The savings via the rail option are substantial: a 40-foot container weighing about 9,600 kilograms (21,164 pounds) would cost about $3,000 via ocean transit, $4,000 via rail, and at $3.85 per kilogram, roughly $37,000 by air transport. The attractiveness of rail rates rises when air cargo capacity tightens and rates increase, as in case of the December holiday peak season. The air cargo capacity crunch spurred medium-sized and smaller shippers to take a gamble on Asia-Europe rail, with many making rail a permanent part of their transport spend even after air cargo capacity loosened, Cindy Miller, president of UPS Global Freight Forwarding, told JOC.com.

“There’s nothing like extreme circumstances that will make something in the logistics chain the next best thing,” said Miller, who is overseeing the expansion of the parcel giant’s service offering from two Chinese cities to six, and the doubling of European cities to four.

Like Goldilocks finding just the right porridge or bed, some shippers are doing the same with Europe-China rail, Miller said. Core Health & Fitness, for example, doesn’t always place orders for its exercise machines in advance and when orders came in they found ocean transits too slow, but air transport too pricey.

Forwarders say shippers are increasingly asking for China-Europe rail options. German forwarder Dachser does more westbound rail cargo out of China carrying mainly electronics and other higher priced products, but there is rapidly increasing demand for eastbound rail out of Germany by shippers of auto parts and machinery, Podesta said.

“Our customers have accepted rail and are using it more and more. Last year, China-Europe rail was regarded as being special, but now they want it included in their transport options,” he said.


For China-Europe rail to take the next step in its evolution, Miller said there needs to be more Chinese and European stations on the two major routes: the northern connection with Russia’s Trans-Siberian Railway and the southern connection via Kazakhstan through Russia and central Asia. She added that the rail option would benefit from the European Union realigning its rail policy to benefit freight a bit more rather than being so heavily weighted toward passenger transport.

“I believe we need infrastructure improvements along the route, increased capacity at railway tracks and terminals. At current route, we already do have locations that can cause congestions and delays at peak volume periods,” said Smrkovsky of HP. “At the same time we need better coordination of customs and railways at border crossings, and to improve the westbound-eastbound balance of platforms and containers.”

Because the China-Europe rail option is part of China’s multi-billion Belt and Road policy, increased investment in the network is widely expected. The Silk Road Economic Belt connects China with Central Asia, Russia, and Europe, linking China with the Persian Gulf and the Mediterranean through Central Asia and West Asia, while also connecting China with Southeast Asia, South Asia, and the Indian Ocean. The ocean element is called the 21st-Century Maritime Silk Road from China's coast to Europe through the South China Sea and the Indian Ocean on one route, and from China's coast through the South China Sea to the South Pacific on the other.

Digitalizing the supply chain would also speed up clearance for unbonded shipments and make it more attractive to shippers since they would be able to better track the journey of their cargo, Wolfgang Lehmacher, global executive and director at the World Economic Forum, wrote in a blog last year. “When companies ship by air they only need to deal with the red tape of customs and inspections at the beginning and end of a journey,” he wrote in the blog. “Ground transportation is less expensive, but it stalls each time you cross a border. Products not only move slowly, but are also subject to increased costs, including potentially moving from one truck or train to another. There are also tariffs, arbitrary delays, and possible system manipulation.”

Lehmacher said a digital revolution would level the playing field for small- and medium-sized shippers, enabling them, for example, to adapt production plans to product supply and demand dynamics or identify new markets. With the right IT in place, on-demand manufacturing and warehouse management platforms could connect makers with factories.

“The revived railway, combined with wise technology investments, creates exciting prospects,” he said. “Imagine how half-empty container cars traveling across a desert in Central Asia could advertise their available space in real time — and at a discount — connecting en route with potential shippers looking for a low-cost way to send their wares.”

More volume moving eastbound is also needed, as there’s little backhaul other than some shipments of cheeses, wines, and other European exports. Chinese subsidies support the movement of the empty containers for repositioning, according to people familiar with the matter. Russia’s retaliatory embargo of food against the European Union for imposing sanctions hasn’t helped, and the embargo, which began in the summer of 2014, has been extended through 2017.

How to Improve OTIF: 15 Tips for On Time and In Full Delivery
END_OF_DOCUMENT_TOKEN_TO_BE_REPLACED