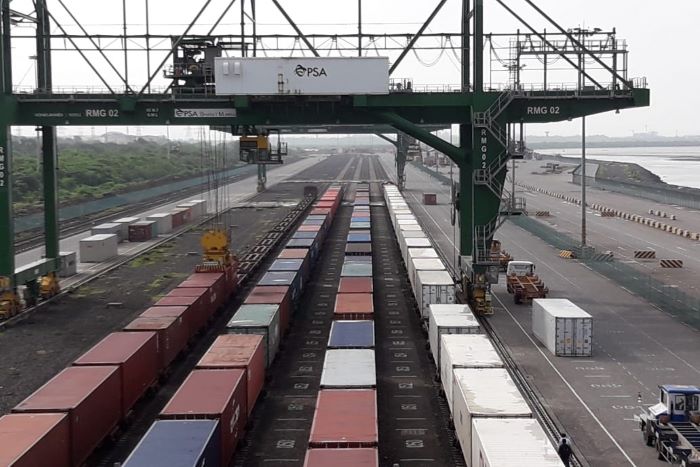 The COVID-19 pandemic has been a blow to global container trade already caught up in tepid economic growth, but the unprecedented disruption has bred a brighter side for cargo flows to and from Indian ports: greater rail freight conversions.

Relative to April-June 2019, all key ports saw marked traction in intermodal rail loads or inland container depot (ICD) freight movement in the first quarter of fiscal year 2020-21, according to a JOC.com analysis of port data.

At Jawaharlal Nehru Port Trust (JNPT), India’s busiest container harbor, the amount of containers moved by train hit 23.5 percent — reportedly the highest-ever level — in the first quarter, up from about 15 percent a year ago. Train services connecting the PSA Terminal at JNPT more than doubled from 57 trips in January to 111 trips in June, with ICD contributions increasing from 15 percent to 22 percent.

Railed containers in and out of Chennai Port soared to 11 percent from 5 percent. Visakhapatnam Port saw April-June rail share jump to 19 percent from 8 percent last year and is expected to gain further ground with this month’s launch of a service to Jajpur in Odisha state with Maersk.

DP World-operated Vallarpadam Terminal at Cochin also seized the opportunity to optimize a rail link it opened earlier this year, having operated 31 round trips with 4,474 TEU moves during January-July, compared with nine trips and 1,172 TEU last year. The company estimated rail freight currently offers a 40 percent cost advantage over trucking.

Maersk told JOC.com it has seen a 30 percent rise in shipper rail demands since the lockdown action and that the resurgent modal shift helped relieve the pressure that was building on cramped transport networks. It also noted rail authorities have lately been more amenable to trade concerns.

“The advantages of moving cargo on rail have been more than just overcoming the unavailability of road transport,” Maersk said. “In inland logistics, rail is one of the quickest, safest, and most environmentally friendly modes of transport for cargo. We are encouraging our customers to move their cargo on rail for higher reliability, efficiency, and speed.”

Historically, the chief concerns of shippers preferring road to rail have been centered on pricing and reliability. While rail operators have a long way to go to sufficiently meet the bargains beneficial cargo owners (BCOs) are seeking to permanently migrate away from their traditional mode, those gaps seem to be narrowing with government policy changes and infrastructure development. A 5 percent reduction in the haulage charges Indian Railways collects from rail companies for use of its countrywide network until April 2021 and a blanket freight waiver on empty train trips on the backhaul leg reflect that intent.

While those are hopeful signs, the main challenge facing rail companies is to sustain reliability and market share gains over long-haul road haulers. Stakeholders have their work cut out as passenger trains run on the same corridors as freight trains, whereby delays are imminent when the country reopens all service schedules.

Global Shipping Outlook: A Sneak Peek at 2021
Port Performance North America: Managing Cargo Flow During a Pandemic — and Beyond
END_OF_DOCUMENT_TOKEN_TO_BE_REPLACED