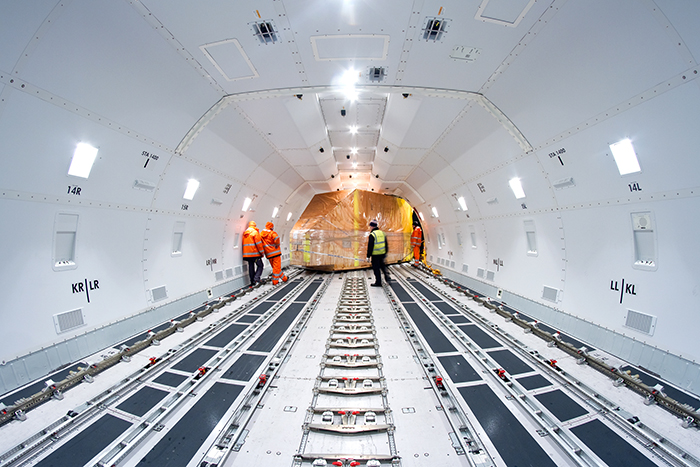 Air cargo volume growth has been robust in recent years, driven by e-commerce and consumer demands for speed to market. Photo credit: Shutterstock.com.

The air cargo industry is beginning to view the high-speed rail network in China and the overland route to Europe with its multibillion dollar investment by Beijing as a serious competitor on the trade.

China has over 12,500 miles of high-speed rail lines — more than the rest of the world combined — designed for speeds of up to 220 mph. Online giants such as Alibaba and JD.com already use the Chinese network for the delivery of high-value and time-sensitive products, which cuts out chronically congested airport hubs.

The rising popularity of the long distance rail network connecting China to the markets of Europe is also beginning to threaten air cargo operators. By 2027, the total rail potential is forecast to be about 636,000 TEU, or 21 trains a day, according to China Railway Corp.

With a price point more than six times cheaper than air — the differential is even greater during peak periods when air cargo space is tight — China-Europe rail is also beginning to add new connections to ease congested hubs on both ends of the network, improving the transit times that are such a key selling point of the route.

Vladimir Zubkov, secretary general of The International Air Cargo Association, said among the challenges that affect European countries more than any others was the Chinese Belt and Road initiative. He highlighted the threat to air posed by China’s rail link with Europe in a recent message to members.

“With the investment of $143 billion in the ground infrastructure, the chances for the diversion of air cargo to the modern, faster than present, and probably cheaper railroads are becoming quite real,” he said.

Zubkov said the overall volume of goods being transported between China and other economies was growing steadily, and air cargo’s strategy should be to, at a minimum, retain its 35 percent share of overall trade by value through deploying new technology and expanding the use of electronic documentation.

“It’s apparent that we will be able to compete with the modernized ground transport more successfully if we keep the pace of modernization of the air cargo processes at least at the level of other transport modes,” he said.

Container shipping has completely shrugged off the competitive threat posed by China-Europe rail and for good reason. If an average train carries 80 FEU, it would require 112 trains to fill one 18,000 TEU ship. But the competition for air cargo is far more acute. Going by weight, one freight train from China to Europe carries enough cargo to fill at least 20 Boeing 777 freighters.

However, he said the dominance of air between Asia and Europe was being challenged by high-speed rail used for parcel delivery, the development of less-than-containerload services for easier consolidation of small orders, improved transit efficiency that has reduced Eurasian Transit times to an average of 18 days, and better connectivity to remote and rural areas.

“Customers are now questioning the price premium of air. This takes on a added importance when one considers that China accounts for 50 percent of e-commerce trade, the bulk of which is retail sales,” Wheeler told JOC.com.

“Are customers that purchase the likes of sportswear, fashion, jewelry, etc. prepared to pay the delivery premium for receiving their products a few days earlier? I can understand a price premium for items, such as spare parts, that keep industry moving but not general retail.”

However, Felix Heger, head of ocean freight Europe for DHL, had a different take. “The main uptake of China rail is in the areas of automotive, tech, engineering, and manufacturing. Retail uses the channel rather as an alternative to air when it comes to expediting shipments due to delivery delays or seasonal market development,” he said. This could be the bulk of the business going via ocean, with expedited shipments that traditionally used air using rail as an alternative.

US engagement with Belt and Road a strategic imperative