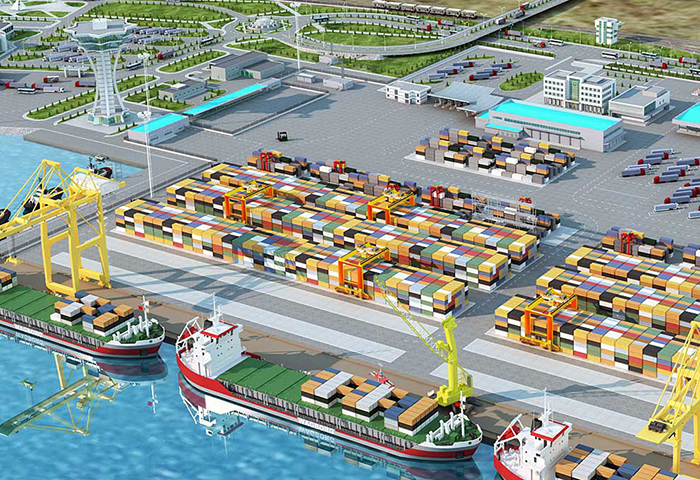 An artist's rendering of the Turkmenbashi port when all ancillary work is complete. Photo credit: Gap Insaat

The opening of the Turkmenbashi seaport in Turkmenistan gives shippers interested in using China-Europe rail one more routing option, although it faces stiff cost and transit time competition from existing corridors.

The Turkmenbashi port is part of the Europe-Caucasus-Asia (TRACECA) trade corridor running from western China through the Central Asian nations of Kazakhstan, Kyrgyzstan, Tajikistan, Uzbekistan, and Turkmenistan on its way to Europe. China has made a concerted effort to develop industry in its interior and western provinces to foster economic growth that has so far been concentrated in the country’s east because of its ocean access.

As the corridor is in its infancy, it is difficult to say how much total TRACECA transportation costs would be, but preliminary estimates of $5,500 to $6,000 per container would make it cheaper than the $6,000 to $7,500 per container for China-Europe rail shipments on Russia’s trans-Siberian railway.

Shipments would be sent via rail to Turkmenbashi before loading onto a ship for transit to Baku, Azerbaijan, where they make their way to the Georgian ports of Batumi and Poti for shipping across the Black Sea to Romania, where the corridor terminates.

Due to a lack of sea access, many Chinese shippers from northwest parts of the country are forced to transport their cargo 3,000 kilometers to the east coast of the country for loading onto ships bound for Europe.

The value of Chinese corridor shipped in this manner is $15 billion per year and gross 5 to 7 percent annually, according to the Chinese Ministry of Economy. At present 93 percent of the 15 to 17 million TEU in Chinese container cargo bound for Europe moves by sea, with the remaining 7 percent split between air and rail.

Redirecting some of the $15 billion in goods would enable shippers in western China to reduce their transit times by more than half, as TRACECA will have a transit time of 20 to 25 days to Europe, compared with 40 to 45 days for ocean shipping from China’s east coast, which does not include the transit time of moving goods from the interior to the coast.

However, although TRACECA is just getting started, the Western China-Western Europe corridor opened in 2007. This corridor is 1,000 kilometers shorter than TRACECA and does not rely on ocean shipping for any leg of its journey, as cargo links up to the trans-Siberian Railway in the Russian border town of Orenburg for shipment into Europe.

The Western China-Western Europe corridor also has fewer customs borders to pass, as Russia and Kazakhstan are part of the Eurasian Customs Union. This means the corridor only has two borders to cross, that between China and Kazakhstan, and Russia and the European Union. The TRACECA corridor will have at least double that amount of customs borders, and up to eight, depending on the routing. The pricing between the two routes is relatively even, with rates of $5,000 to 5,500 per container for the Western China-Western Europe corridor.

The Turkmenbashi seaport, which says it will have crane productivity of 25 TEU per hour, has an annual capacity of 400,000 TEU spread over 249,00 square meters (2.7 million square feet) and a quay of 510 meters.