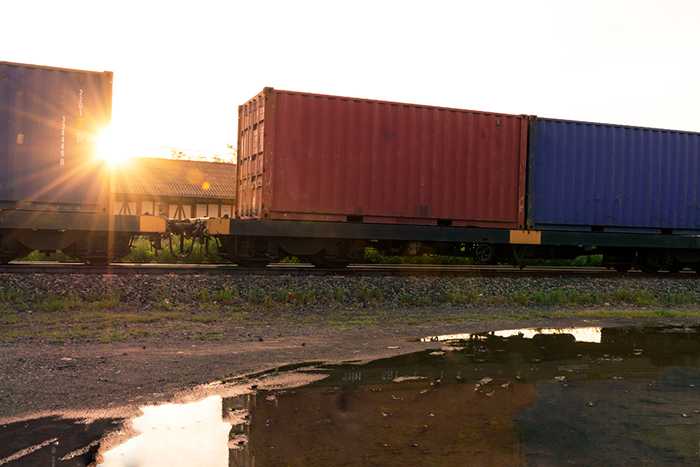 The fastest shipments by rail on Asia-Europe take around 15 days, compared with 33 days by ocean and three days by air.

HAMBURG — Rail services carrying containers between Asia and Europe are on a strong growth trajectory, but will not diminish or impact the relevance of maritime liner services, a panel of experts told delegates at JOC Container Trade Europe conference here.

Beneficial cargo owners are steadily increasing volumes on landbridge services as they become sophisticated to the point they now offer better reliability than both ocean and air modes, creating an additional lever to manage intercontinental supply chains.

“It is an ideal complementary service to the existing transport connections between Asia and Europe, it increases flexibility in the supply chain and makes shippers more agile,” said Felix Heger, vice president and head of ocean freight, Europe, with DHL Global Forwarding.

Given the much lower freight rates, landbridge services are more of a threat to air cargo than seaborne freight, although BCOs increasingly view the faster and more reliable rail solution as a good option to expedite ocean shipments as well, Heger said.

Current landbridge rates are around three to five times more than ocean and around 15 to 20 times less than air, according to the Paribus Group, a privately owned German investment and asset manager that invests in rail infrastructure. The fastest shipments by rail take around 15 days, compared with 33 days by ocean and three days by air.

Up to 15 different logistics companies are now competing to provide rail landbridge services to BCOs, with market leader, Far East Landbridge Ltd., shipping around 50,000 twenty-foot-equivalent units per year, said Christian Drake, managing director of Paribus Vertrieb, which currently has around $2.2 billion under management in rail and real estate assets.

“We’re loading from China on a nearly daily basis, the trains are on schedule and the running times are decreasing continuously,” said Anja Kruger of German logistics service provider Kopf & Lubben, which expects landbridge volumes to rise to 1 million TEUs annually by 2020.

Together with better reliability and time and costs savings, the ability to ship directly to numerous hinterland locations and the reduce environmental impact of the supply chain are contributing to the growth of the services, said Drake.

“I am not sure if we will hit the 1 million TEU figure by 2020, but the services are developing and growing very well,” he said.

Some BCOs are attracted to the opportunity to better utilize investment capital as shorter transit times mean shorter loan repayment periods. For a container with cargo valued at $100,000 with an interest rate of 4 percent on a rail transit time of 19 days compared with 41 days by ocean, the interest savings work out to around $240 per container.

“It decreases the working capital cycle and frees up cash sooner. Business can be expanded with less reliance on capital funding,” said Heger of DGF.

DGF offers BCOs a full end-to-end rail solution for full- and less-than-containerload shipments. It also offers value-added services such as container-level GPS monitoring that provides real-time visibility on cargo status along the route including alerts and action plans in the case of security breaches.

DGF expanded its landbridge service offering to BCOs in South Korea and Taiwan via ports in mainland China last year following the addition of Japan in 2014.

Multinational information technology company Hewlett-Packard was one of the first major corporations to ship large amounts of product via the landbridge to Europe from its manufacturing operations in Western China. Today the company ships 6,000 forty-foot-equivalent units per year from China to Europe by rail.

“The reasons for this are because it saves us money and because we find it more reliable than both ocean or air freight,” said David Smrkovsky, strategic procurement manager with HP based in the Czech Republic.

While services are improving, they remain fragmented and open to risks such as potential political and policy differences among countries along the route. According to Drake of Paribus, of the 39 connections currently available to shippers just 13 of those operate on a frequent basis.

“For many it is a matter of operating when the train is filled. We also need to bear in mind the potential for political problems among the different countries along the routes that could disrupt services in the future.”