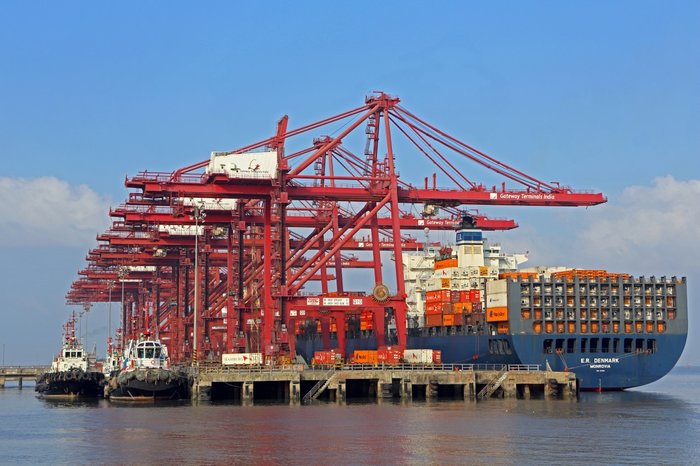 More freight is shifting to the rails at India's premier container port.

Jawaharlal Nehru Port Trust’s (JNPT) share of cargo moving by rail climbed to 15.3 percent in July from 14.8 percent in June as efforts to move more freight by rail slowly but steadily advance.

The equalization of train and truck handling charges at all terminals in JNPT to Rs. 844 ($13.2) per TEU helped pull the share of goods moved via rail from JNPT to above 15 percent for the first time in a year. That the increase came despite rail-handling disruption from the Maersk Group cyber attack that limited capacity at APM Terminals Mumbai at the beginning of July is a major feat for the public port, and the trend should encourage port officials to redouble their efforts to reach a government target goal of 25 percent rail share.

As a result, the share of July truckloads edged down to 83.5 percent from 83.8 percent in June, even though the port’s overall throughput increased 3.5 percent month to month.

However, the port has a long way to go, as the percentage of rail traffic in the April to July period remained at just 14.2 percent, down from 15.4 percent a year earlier, whereas truck freight accounted for 84.5 percent, versus 83.6 percent in the corresponding period of 2016, according to the analysis.

Enhancing the efficiency of India’s state-owned major ports, which together account for roughly 70 percent of the nation’s total container trade, is critical to the government’s bid to reduce logistics costs from between 14 and 18 percent of gross domestic product. Prime Minister Narendra Modi has made improving the country’s ranking in the World Bank's ease-of-doing-business survey, where it was ranked 130 out of 189 nations in the last report, a hallmark of his rule.

JNPT moves the majorit of India’s container cargo and as such is the focus of government efforts to boost productivity. The Ministry of Shipping last week met with stakeholders to review the progress of logistics cost and dwell time reduction efforts and directed JNPT officials to communicate to any delays or issues with the clearance of rail cargo.

JNPT’s productivity levels have been steadily improving thanks to those vigorous efforts, as its fiscal year 2016 to 2017 overall average dwell time was down to 2.54 days from 3.06 days previously, according to statistics collected by JOC.com. The port is now considering a reduction in  gate-in hours for export cargo to three days from an average of four days at present, which will boost productivity and throughput by allowing JNPT terminals to accommodate more vessels.

Further rail volume gains are possible as rail authorities discuss the addition of more services and work proceeds on a Rs. 100-crore “common rail yard” for all terminals to speed quayside rail operations.

JNPT handled 5.6 percent more containers in the April to July period year over year, with throughput up to 1.61 million TEU from 1.52 million TEU, according to new data produced by JOC.com.