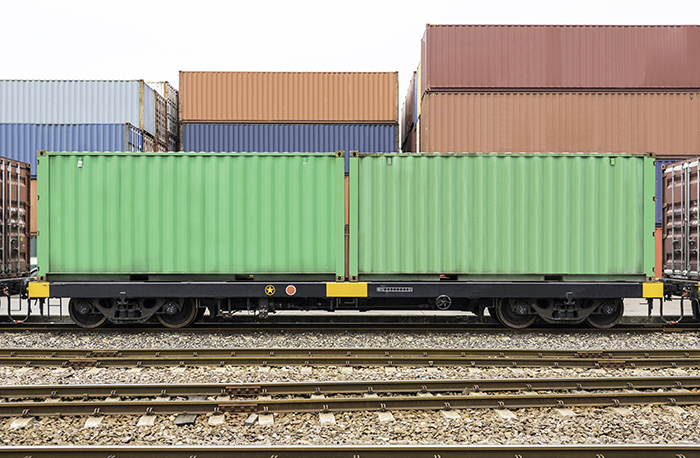 The number of Asia-Europe rail options available to shippers continues to grow.

DHL Global Forwarding has set up new ferry services from Incheon and Busan to a range of Chinese ports including Shanghai, Taicang, and Lianyungang. South Korean shipments will then travel via truck to major inland hubs in cities including Chengdu, Hefei, Suzhou, and Xi'an for subsequent transport to Europe on DHL's rail services.

"With South Korean exports to Europe this year growing at their fastest pace since 2011, the country's major industries have greater need for flexible, scalable freight services than ever before," said Charles Kaufman, DHL Global Forwarding CEO for North Asia, managing director, Japan, and head of value added services, Asia Pacific.

The multimodal network will include end-to-end customs handling, GPS tracking of containers, and a range of cargo insurance options, minimizing the risks of delays and disruption for both full- and LCL shipments.

DHL has also signed an agreement with Latvian Railways to establish high-speed multimodal rail routes between Latvia and China, using Riga City as a logistics hub for Baltic and Nordic regions. Under the deal, new connections will include guaranteed transit times and simplified customs and handling procedures for inbound and outbound cargo, as well as support for more flexible shipments such as LCL freight.

"The two regions' exports made up only 0.7 percent of China's imports on average between 2011 and 2015, despite China's demand for overseas goods such as high-quality food products, textiles, and pharmaceuticals growing rapidly in this time.

"With the economies of Latvia and its neighbors expected to grow faster than the rest of the European Union, businesses in the region will need to look to new markets like China to fuel their expansion. By building rapid, reliable logistics connections between the Baltic and Asia Pacific, we hope to give the region's businesses a strong foundation for ongoing growth."

The agreement comes as DHL rolls out services along its newest Asia-Europe multimodal route connecting Shenzhen to Minsk via rail. DHL holds similar agreements with national rail providers in Belarus, Chengdu, and other major hubs along China's Belt and Road trade routes.

Kerry Logistics has also been busy developing its overland connections between China and Europe. The Hong Kong-listed forwarder has launched a weekly scheduled LCL rail freight service between the German hub of Duisburg and Shanghai via Yiwu in the Yangtze River Delta using its own consolidation containers.

Shipments have already been successfully moved using the new service, which offers weekly departures on Friday eastbound and Wednesday westbound, with a transit time of 16 days for westbound cargo, and 21 days eastbound.

Thomas Blank, Kerry Logistics managing director of Europe, said cargo being carried in the service would range from industrial freight down to smaller e-commerce commodities.

“Acting as the consolidator ourselves allows us to offer shorter lead times, moving each shipment faster than if we had to wait for a full container from each customer, who can monitor their cargo along the route via online track and trace,” he said in a statement.

The rail freight solution provides a range of upstream services, including storage, quality control, assembly, and reworking in addition to pre-carriage and delivery to final destination.

The new LCL service comes just two weeks after Kerry Logistics’ investment in Globalink Logistics, a freight forwarding group headquartered in Dubai with operations across the Commonwealth of Independent States. The partnership increases Kerry Logistics’ presence and capabilities across Central Asia on its overland network connecting Europe and China.

Ceva Logistics has also expanded its China-Europe rail freight network with the launch of a new service between Shilong in the southern Guangdong province and Hamburg, Europe’s third-largest container port. The regular block train service, operated with the Chinese state rail company, will route Shilong, Manzhouli (China), Zabakalsky (Russia), Brest (Belarus), Malaszewicze, and Hamburg with a station-to-station lead time of 17 to 19 days.

The year-round service will save shippers up to two days of transit time compared with other rail routings and deliver cost savings as a result, Netherlands-based Ceva said.

Although rail has been touted as a rival to air and ocean transport modes, it is constrained by limited capacity, with each service handling an average of just 45 FEU. Additionally, the vast majority of services are still block trains where the entire train is booked by one customer and bonded for the journey, and although forwarders offer LCL cargo services, availability is limited.

Even at full optimization, the Asia-Europe rail system can only handle a maximum of between 500,000 TEU and 1 million TEU, according to a report by the Organization for Economic Co-operation and Development.

Canada Trade and Shipping Outlook
TPM22: What We Learned — Container Shipping in the Crosshairs
Managing E-Commerce From Order to Delivery and Beyond
END_OF_DOCUMENT_TOKEN_TO_BE_REPLACED