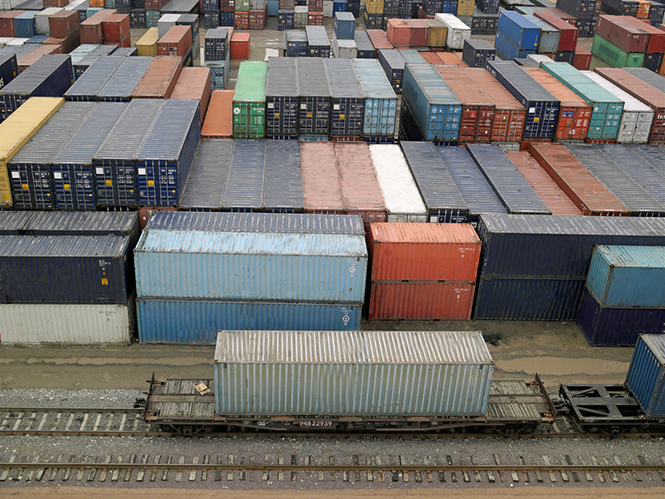 Container Corporation of India operates a network of about 65 inland terminals nationwide and is working to add five facilities over the next two years.

The volume declines were most pronounced on the import-export front amid the downturn in global trade. This forced net income down 14 percent year-over-year to Rs. 178.48 crore (approximately $27.5 million) in the April-to-July quarter, the company said in a filing to the Bombay Stock Exchange.

An analysis of Concor’s earnings statement shows revenue was down across all of its rail segments, even as the logistics provider expanded its reach into new, growing areas.

Concor operates a network of about 65 inland terminals nationwide and is working to add five facilities over the next two years. The company also has its sights set on new rail-sidings, services in India’s southwestern corner, where two international transshipment hubs are in the work at Enayam and Vizhinjam. In addition, the company has lined up a chain of new multimodal logistics solutions sites at various port locations on the east coast.

Though Indian shippers continue to rely heavily on trucks, intermodal connectivity is rapidly gaining momentum as the Narendra Modi government has set up a special-purpose rail company administered by Indian Railways and earmarked huge financial resources for the development of new port-rail projects as part of its Sagar Mala infrastructure program. Both could could prove a boon to Concor, which is an offshoot of Railways.

Concor’s fiscal year 2015 to 2016 volumes dove 7 percent year-over-year to 2.9 million twenty-foot-equivalent units, with export-import traffic down to nearly 2.5 million TEUs from 2.6 million TEUs and domestic cargo, down to 448,000 TEUs from 489,000 TEUs, according to intermodal statistics collected by JOC.com.