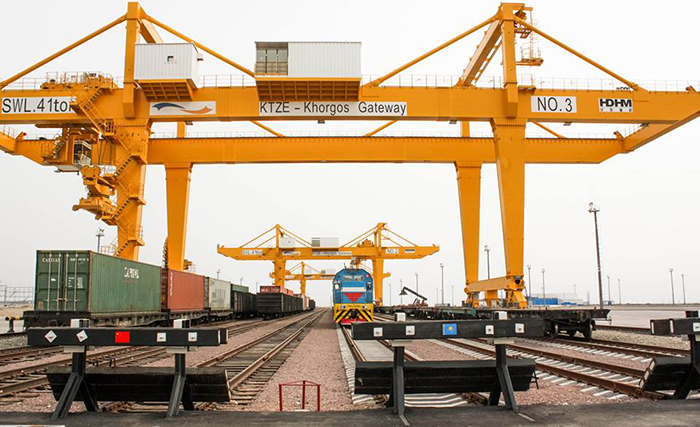 DP World continued its search for investment opportunities along the China-Europe Silk Road with a meeting between the company’s chairman Sultan Ahmed Bin Sulayem and President of Kazakhstan Nursultan Nazarbayev.

The Dubai-based global terminal operator said trade and investment opportunities along what it called the world’s largest economic corridor are “immense” and that it was looking at opportunities to expand its participation in the development of the Khorgos Eastern Gate Special Economic Zone as well as the Port of Aktau on the Caspian Sea.

Located in Kazakhstan’s Panfilov district on the border with China, the Khorgos Eastern Gate is a 150-hectare (370-acre) logistics complex and industrial economic zone central to an expanding network of transcontinental trade routes linking China with Europe. The dry port is owned by multimodal operator JSC KTZ Express, a subsidiary of Kazakhstan’s national railway company, and operated in cooperation with DP World.

“We have a fruitful relationship with the government of Kazakhstan that we are looking to build on and will work with them on projects that support the flow of goods and enable trade across the region, which remains an attractive market for us with huge long-term growth prospects,” Bin Sulayem said after the meeting in St. Petersburg.

The government of Kazakhstan expects throughput at the Khorgos Eastern Gate dry port to reach 500,000 twenty-foot-equivalent units by 2020. When fully complete in 2018, the port will be 580 hectares in size.

DP World also provides Kazakhstan with advisory services on the development of the Port of Aktau, Kazakhstan’s main cargo and bulk terminal on the Caspian Sea.

DP World advises Kazakhstan on the development of the Port of Aktau.

DP World recently sent a research team to Georgia to look at opportunities to invest in supply chain infrastructure in the country, including the possibility of building a marine terminal, inland terminal, logistics park or economic zone.

Earlier in 2016, the group announced a partnership with the Russia Direct Investment Fund to launch a new joint venture company targeting ports, transportation and logistics infrastructure in Russia. DP World Russia will target marine, dry ports and logistics infrastructure in different parts of the vast country, with the expectation of investment topping $2 billion in upgrades to Russian ports.