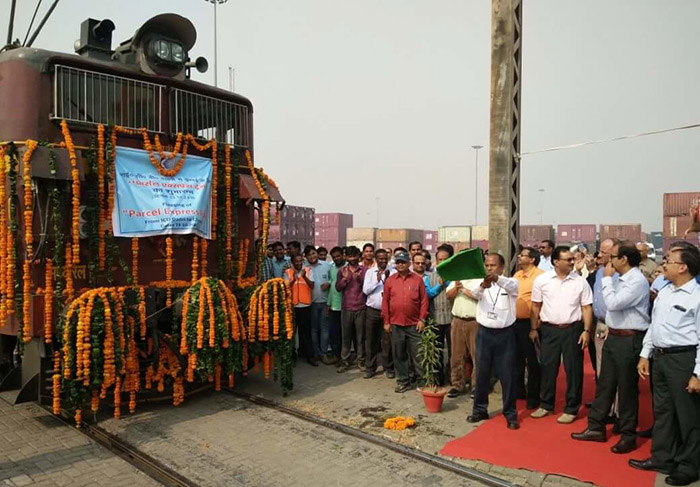 Officials inaugurate the new scheduled service from the Dadri inland container depot to the Tondiarpet ICD.

Concor this week began operating a new scheduled service from Dadri, a busy inland container depot near Delhi, to the Tondiarpet ICD on the outskirts of Chennai.

“This service is a significant step in facilitating the trade and in continuation of complying with the announcements made by the Minister for Railways. The transit time of the service is below 70 hours,” an official statement said.

The new service comes in addition to three time-guaranteed services that Concor operates from the Okhla ICD to Tondiarpet, Whitefield (Bangalore) and Nagulapalli (Hyderabad).

Concor said it expects containerized rail movements on the Dadri-Tondiarpet route to increase by 20 to 25 percent, given the logistics cost benefits for shippers.

For Chennai Port, which has been battling drayage bottlenecks, the upgraded rail service should help draw more truckloads onto intermodal trains, especially as the public port is offering special incentives for rail cargo. That shift could help Chennai end congestion problems that have prompted many mainline carriers, including Maersk Line, to shift their weekly calls to nearby private ports, including Kattupalli and Krishnapatnam.

That congestion has dragged down throughput growth at Chennai, according to an analysis of port statistics compiled by JOC.com that shows Chennai’s annual volumes have hovered around 1.5 million twenty-foot-equivalent units in recent years. The port has a total capacity of about 3 million TEUs per year.

Rail infrastructure development is a top priority for Prime Minister Narendra Modi's government as part of a larger scheme to upgrade port connectivity and ease growing pressure on land transport systems. To accelerate those efforts, the government has set up a separate company — Indian Port Rail Corporation — based on equity participation from major port authorities and Indian Railways. IPRCL has already been awarded contracts for 22 port-rail projects with a total estimated investment of Rs. 20,000 crore (approximately $3 billion).

IPRCL also recently set up a cooperation deal with Deutsche Bahn, Germany's national rail company, for the upgrade of port rail infrastructure in the country.