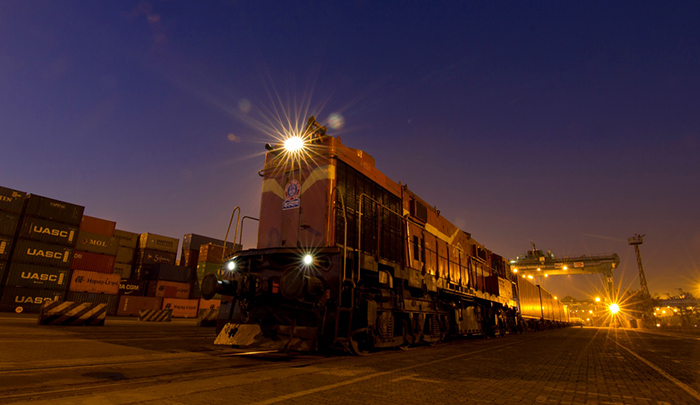 On-dock rail infrastructure and a Concor train at APMT Mumbai.

Concor, an offshoot of Indian Railways, booked a net profit decline of 32 percent year-over-year to Rs. 206.12 crore (about $30.3 million) in the three months through the end of December, down from Rs. 301.08 crore, according to a company filing with the Bombay Stock Exchange.

The fiscal third-quarter results are in sharp contrast to the prior quarter, when net earnings jumped 21 percent year-over-year on revenue that was up 11 percent.

In the third quarter, the company’s operating profit fell 23.6 percent to $40.2 million from $52.7 million, the earnings release shows.

Operating expenses in the third quarter increased 3 percent year-over-year to $178.2 million, of which $130 million involved rail-haulage fees levied by parent Indian Railways for use of its network and infrastructure.

In the first three fiscal quarters, which ran from April to December, Concor saw net earnings tumble 14.4 percent year-over-year to $95 million, even as revenue was up 6 percent to $636 million, according to the statement.

Concor is the largest intermodal logistics provider in India, with a network of 63 inland terminals. Official statistics show the company moves more than 3 million 20-foot-equivalent units of hinterland cargo annually.

In line with its previously-approved capital spending plan, the company is working with the Andhra Pradesh state government to set up a “multimodal logistics park” at Kakinada Port with an estimated investment of Rs. 450 crore ($66 million).  The state agency is reported to have allocated 89 acres close to the harbor for the proposed project.

Concor is also building a similar logistics site at the major public port of Visakhapatnam.