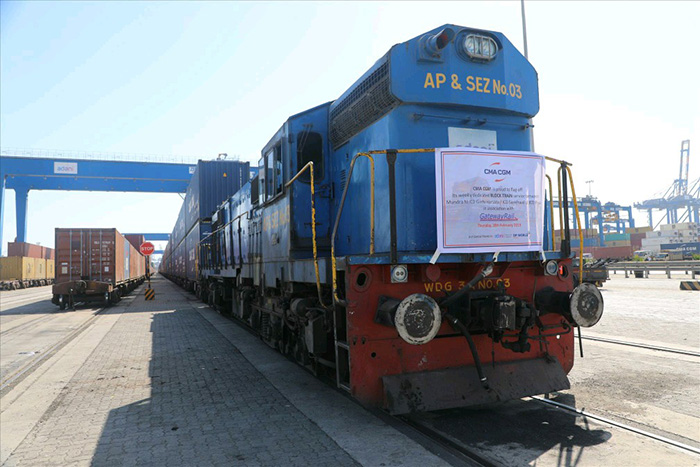 Intermodal rail service is gaining traction in India as ocean carriers and forwarders look to increase connections to a growing consumer base in the country’s vast interior.

In the latest example of the trend toward intermodalism, CMA CGM (India) recently started using double-stack block trains for the movement of containerized freight from Mundra port to the northern corridor. Touted as a first in its inland product portfolio, the intermodal service was inaugurated last week with a 180-TEU railcar departing Mundra on an 850-mile journey to the inland points of Garhi, Piyala, and Ludhiana, officials at CMA CGM (India) told JOC.com. The twice-a-week service runs from Mundra every Monday and Thursday, fed by CMA CGM’s weekly calls at the Adani CMA Mundra Container Terminal (ACMTPL), a joint venture between the port owner Adani Group and the French shipping group. ACMTPL opened to operations in 2017 with a capacity of 1.3 million TEU annually.

Ugo Vincent, managing director of CMA CGM (India), said the group has been actively investing in inland solutions to shore up supply chain reliability, and the Mundra block train operation is the latest step in that direction.

Since 2008, the company has been operating single-stack freight train services between Mundra and ICDs at Dadri and Tughlakabad, near Delhi. “Through its inland network, CMA CGM India offers customers ramp and door solutions based on the most competitive and reliable services, helping them optimize their supply chains,” officials said.

CMA CGM is one of the top carriers in trade to and from India, with a network of 30 offices, about 600 employees, and access to more than 50 inland locations in the emerging market economy. The carrier has regular weekly calls at seven gateway and six feeder ports across the country, connecting to Europe, North and South America, Africa, Asia, Australia, and the Middle East.

In an effort to stay ahead of the competition in the Indian subcontinent, the Marseilles-based line has also rolled out several unique offerings for Indian customers in recent months, including the use of “smart containers” capable of providing real-time supply chain visibility and a “cargo value serenity” program under which shipments booked with CMA CGM and its group bills of lading are indemnified against any loss from the origin to the destination.

Mundra, about 300 nautical miles from Jawaharlal Nehru Port Trust (JNPT), is India’s busiest privately operated harbor. In addition to ACMTPL, the port features three other terminals and a combined capacity of 5.5 million TEU annually. Large-scale expansions currently under way will increase annual capacity to 6.6 million TEU annually. The private harbor hosts as many as 36 fixed-day weekly container services, eight of which are operated by CMA CGM, mostly through vessel-sharing partnerships.

For ICD freight shipped via the country’s west coast, Mundra enjoys a competitive edge over state-run rival JNPT due to its closer proximity to northern hinterland markets. This geographical advantage has played a role, along with unregulated port tariffs and modern infrastructure, in accelerating growth at Adani’s flagship cargo hub. Mundra has also benefited from a cabotage rule change enacted by New Delhi nearly a year ago to encourage direct cargo movement instead of transshipment via foreign ports.

Adani-operated terminals at Mundra handled 3.6 million TEU in 2018, according to JOC.com port data, an impressive 22 percent share of the total 16.4 million TEU shipped in and out of the country during the year. Of that, ACMTPL contributed 661,258 TEU, and CMA CGM’s new intermodal rail service could further contribute to the growing volume at the facility.

Larger, steadier rail freight conversions are critical for Indian ports to meet government targets on cargo dwell times. Intermodal prospects are slowly picking up thanks to a renewed government focus on rail infrastructure, but a substantial shift away from traditional trucking is unlikely until dedicated rail freight corridor (DFC) projects currently under construction are completed. The 932-mile western DFC route, for example, will connect JNPT to the Dadri ICD.

In addition, the Indian government has established a special-purpose company, the Indian Port Rail Corporation Limited (IPRCL), with equity participation from major port authorities and Indian Railways, to streamline and speed up public investments in the development of last-mile rail projects. IPRCL has already undertaken a host of works at various ports, including some at JNPT.

Those upgrades are especially important for JNPT, as its persistent efforts to convert more truckloads into intermodal freight through special incentives have been largely unsuccessful, with the port’s share of container cargo that goes to rail continuing to hover around 15 percent, well below a longstanding government goal of 25 percent. Mundra, on the other hand, is faring much better on this front, with rail hauls there pegged at 25-30 percent of overall container moves, according to data collected by JOC.com. Portwide rail figures were not available, but DP World-operated Mundra International Container Terminal (MICT) reported handling 282,305 TEU by rail in 2018, roughly 34 percent of its total throughput of 818,593 TEU.

Even so, JNPT has considerably reduced on-dock container dwell times thanks in large part to the successful rollout of a direct port delivery (DPD) program, under which imports can be cleared directly from the wharf within 48 hours of landing at the port. New data released by radio-frequency identification (RFID) service provider DMICDC Logistics Data Services (DLDS) show JNPT’s average dwell times — both imports and exports — slid from 42.7 hours in December to 40.3 hours in January. Further reductions are expected after JNPT’s DPD handling hit an all-time high of 48.2 percent of laden imports during February. By comparison, Mundra’s average dwell time figures during January were 31 percent higher for exports, up to 101 hours, and up 8 percent for imports, to 24 hours, compared with the previous month, according to DLDS data. This is compared with 69 hours and 22 hours, respectively, at JNPT.

Following the 2006 liberalization of containerized rail in India, the government has thus far issued licenses to 17 private rail operators, the most notable being Gateway Rail, which sports a fleet of 23 freight trains and five inland terminals. However, Container Corporation of India (Concor), an offshoot of Indian Railways, continues to dominate the market on the strength of its expansive network of more than 80 ICDs across the country. Much like CMA CGM, Concor is also working to transform itself from a niche container rail operator to a more holistic, integrated logistics provider, venturing into coastal shipping operations earlier this year.

With the emergence of a new breed of privately-operated minor ports and recent expansions at major public ports, India has built sufficient container-handling capacity — currently estimated at 27 million TEU annually — to cover trade demands in the immediate future, but it sorely lacks adequate inland connectivity infrastructure to efficiently handle projected growth. A quick fix is unlikely, but things are looking up for the emerging market economy, as the government has embarked on a mammoth $180-billion investment program, dubbed “Sagar Mala,” to overhaul the country’s port sector with a heavier focus on inland connectivity.

Although many of those plans are still in the various stages of development and implementation, there is a general view among domestic and global business leaders that India’s freight industry is on the cusp of major development and transformation, aided by infrastructure investments, reforms, and digitization. Maersk Line, for example, said in its most recent quarterly regional report that infrastructure upgrades, digitization, and pro-trade reform efforts are combining to position India as one of the “top trading destinations” in the world.