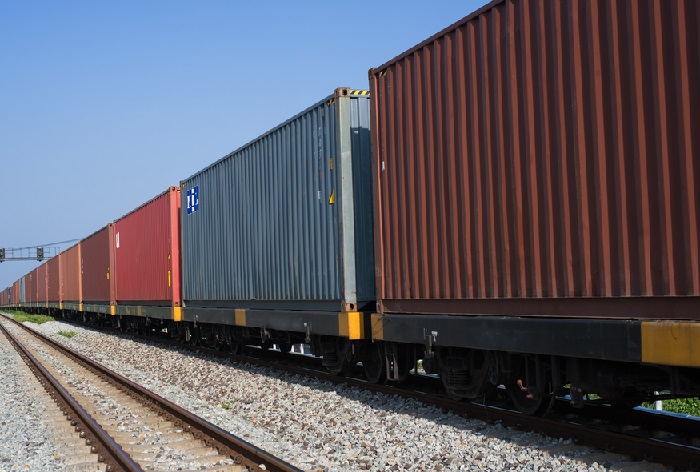 The travel time for a goods-laden truck from Chittagong to Dhaka is nearly 10 to 16 hours, while a freight train takes 10.5 to 12 hours. Photo credit: Shutterstock.com.

Shippers’ increased usage of rail for imported containers has created significant congestion at Dhaka Inland Container Depot (ICD)-bound cargo at Chittagong port.
For the past few months, nearly 900 TEU of Dhaka ICD-bound containers remained delayed at the port, daily.
An inadequate supply of wagons from Bangladesh Railway has also increased the congestion, according to port officials.
Chittagong Port Authority (CPA) traffic director Golam Sarwar told JOC.com shipper interest in rail-transported containers increased after installation of a rail-mounted gantry crane at the port. In November, 7,524 TEU were transported by rail to Dhaka ICD; in the past, only 5,000 to 6,000 containers were rail transported per month.
Transport cost and time are also encourgaging shippers to choose rail. Data show that train transport of goods is substantially cheaper and quicker for shippers. The travel time for a goods-laden truck from Chittagong to Dhaka is nearly 10 to 16 hours, while a freight train takes 10.5 to 12 hours. A container of goods transported by trucks costs $200 to $300, while a train charges $150 to $260.
Further, Sarwar said carrying a TEU of goods by road requires two trucks, which increases the transport cost. Conversely, using rail, a full container can be transporated at once to Dhaka and can be delivered to the factories directly from Dhaka ICD. Hence, shippers prefer rail, which has led to the congestion.

Each day, three trains leave Chittagong ICD for Dhaka ICD carrying 120 TEU to 160 TEU. A similar number of trains also are transported to Chittagong ICD from Dhaka ICD. A senior port official, speaking on condition he not be identified, told JOC.com the ICD yard of the Chittagong port can store about 1,000 TEU of containers.
“The present storage position is within our capacity but may exceed it at any time,” he said.
However, he cited other reasons for the increased shipper interest in rail transport.
“To my knowledge, the customs activities at Dhaka ICD is comparatively loose now. Shippers are getting a ‘financial benefit’ there, which encourages them to take delivery of import containers through the depot,” he said.
According to a senior railway official, the Bangladesh Railway now has 450-900 wagons, but not all are in operation. Some remain in the workshop for maintenance work while others are out of service. Still, the official claimed that the supply of wagons in operation is enough to transport containers from Chittagong to Dhaka ICD. Rather, it was operational mismanagement by both the railway and Chittagong port that creates the mismatch, he said.
The official added that old locomotives are also causing transport delays from the port to Dhaka ICD.
Aided by an improved rail network, container goods transported by rail in Bangladesh have uptrended. In fiscal 2017-2018, Bangladesh Railway transported nearly 75,000 TEU to and from Dhaka and Chittagong; that’s a 25 percent increase from 60,000 TEU in fiscal 2013-2014.
To facilitate container goods transport, Bangladesh Railway is implementing several projects, including constructing several inland container depots near the capital and other industrial hubs.
Furthermore, earlier this year the Asian Development Bank (ADB) granted the railway $360 million to buy modern rolling stock, luggage vans, and wagons to help promote a shift in cargo transport from road to rail. As part of that grant, Bangladesh Railway will buy 40 broad gauge locomotives, 125 luggage vans, and 1,000 wagons for freight trains.
Rail & Intermodal›International Rail›Asia
International Logistics
International Logistics›Logistics Providers
Asia
Asia›Bangladesh
Rail & Intermodal›International Rail›Asia
International Logistics
International Logistics›Logistics Providers
Asia
Asia›Bangladesh