South Africa works to move cargo from road to rail

South Africa works to move cargo from road to rail 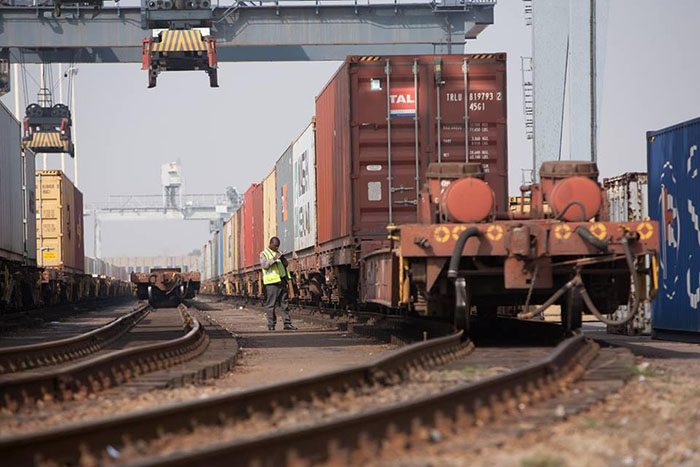 Offloading and Loading of containers at the City Deep Inland Container Terminal in Johannesburg.

Transnet National Ports Authority is leading attempts to win road traffic back onto rail in South Africa, a shift it would stand to gain from the most.

TNPA has plenty of work yet ahead. Including containers but not liquid bulk, 70 percent of cargo travels by road between Durban, the country’s main port, and Gauteng, the industrial heartland of South Africa.

Transnet late in November completed a revamp of City Deep Container Terminal outside Johannesburg, which had been viewed as a place “where containers go to die,” but now holds the key to the road-to-rail drive.

Transnet Freight Rail has ordered more than 1,000 electric and diesel-electric locomotives, mainly for the box trade and trains transporting coal and manganese. These commodities are currently trucked extensively — in particular, a higher proportion of coal than Transnet cares to admit.

Gama said Transnet must market itself more aggressively and reduce its dependence on minerals and mining. This means gaining more traffic from the fast-moving consumer goods and manufacturing sectors.

Freight moving inland to the neighboring countries, however, continues to be dominated by road, a situation that looks unlikely to change in the near future.

Sector leaders expect little to change until talk about the seamless one-stop border crossings turns to action, with the resolution of delays at border crossing and the clearing of bureaucratic snarls in neighboring countries.

How to Improve OTIF: 15 Tips for On Time and In Full Delivery
END_OF_DOCUMENT_TOKEN_TO_BE_REPLACED