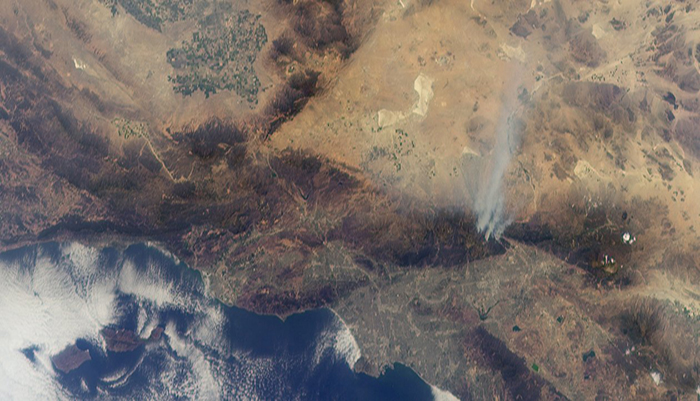 This photo from NASA shows the extent of the Blue Cut fire, which has cut off access to critical rail and road routes.

The continued closure of at least one railway line and a highway disrupted the flow of containers to and from the ports of Long Beach and Los Angeles Friday in the fourth day of a savage wildfire wreaking havoc in the northeast Los Angeles area.

Operations at the two largest ports in the nation, however, were largely normal.

The fire expanded slightly overnight, to cover about 37,000 acres, and has so far forced the evacuation of 34,500 homes, as 1,584 people battle the flames. The impact on the Cajon Pass was diminished, compared with Wednesday and Thursday, however.

A section of Interstate 138, a key truck route and a feeder into Interstate 15, remained closed Friday morning; although Interstate 15 itself, having reopened Thursday, was flowing fairly smoothly, said U.S. Forest Service spokesperson Travis Mason. Still, there were “intermittent closures” as workers repaired damage to infrastructure on the highway as a result of the fire, he said.

Union Pacific Railroad said its freight line in the area remained closed, owing to repair work on fire damage to a bridge. “We anticipate the repair work being completed and reopening the line by the end of the weekend or early next week,” said spokesperson Justin E. Jacobs.

BNSF Railway, which has three lines in the area that were at one time closed, opened two of them early Wednesday evening. The third one was opened Thursday evening, said spokeswoman Lena Kent.