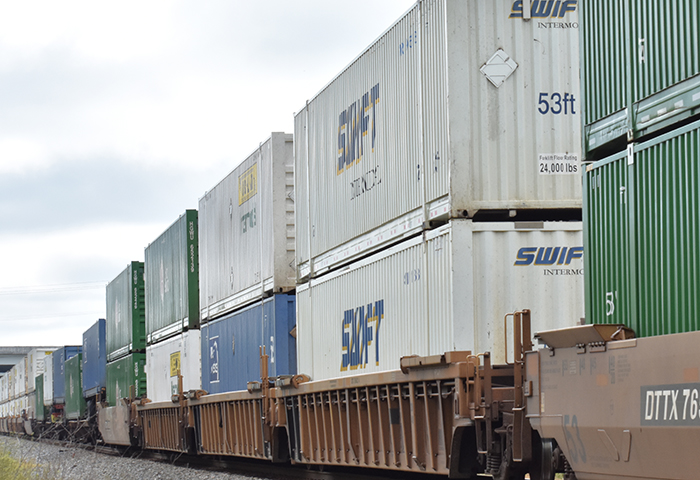 Domestic intermodal volumes are down in the first quarter, although business from Knight-Swift, Hub Group, and J.B. Hunt is doing better than brokers relying on railroad containers. Photo credit: Shutterstock.com.

Poor weather, slower train speeds, service reductions, equipment shortage, and a more competitive truck market is poised to pull North American domestic intermodal volume down in the first quarter, which would be the first time traffic has registered a decline since autumn 2016.

While the domestic intermodal data are clear, with volume declining year over year for the last three consecutive months, how much poor weather factored into those results isn’t so transparent. The decline may merely be a blip reflecting a shift in shipping behavior that was compounded by slower trains and inconsistent service, but it could also be a warning sign that railroads’ long-term effort to attract cargo from the road is sputtering. Or perhaps early 2018 was just so strong that the comparison is unreasonable.

Overall North American intermodal volume is up 0.7 percent on a rolling three-month average through February, according to the Intermodal Association of North America (IANA). Digging deeper into IANA’s number, however, international loads have grown 3.4 percent during that time frame, while domestic shipments have slipped 2.2 percent. Although IANA’s data are published monthly, weekly figures from the American Association of Railroads (AAR) shows sluggish conditions continuing into March. Total intermodal volume — international and domestic — fell 1.6 percent on a rolling four-week average and is down 0.9 percent so far this quarter, according to AAR.

Lane closures related to the implementation of precision scheduled railroading (PSR) principles at CSX Transportation, Union Pacific Railroad, and Norfolk Southern Railroad “might be one explanation for this,” said Larry Gross, intermodal analyst with Gross Transportation Consulting. “Congestion is another. You’ve got flooding issues, the polar vortex. Or this might be an indication that the price offering is somehow out of whack.”

If the core issue was inclement weather, shippers — and volume — will return in the second quarter. If the decline was a result of CSX, UP, and NS eliminating service on low margin lanes, however, should they concentrate on capturing new business? If railroads aren’t pricing properly or customers are dissatisfied with the level of service, then deeper conversations are necessary on how to attract and retain shippers.

One clear reason for dwindling volume is the elimination of domestic intermodal lanes. CSX, UP, and NS canceled service on hundreds of low-yield lanes as part of PSR initiatives, which emphasize shedding excess equipment and concentrating on higher margin routes. Shippers in a defunct lane would generally switch to truckload. PSR railroads argue that although fewer lanes translate into shedding business in the short term, shippers will tender more freight in the long run as service and reliability improve in larger markets.

CSX’s implementation of PSR seems to be paying dividends, as it was the only Class I railroad with both higher volume and better service in 2018. Shippers using other railroads experienced slow and inconsistent service as volume climbed last year. Poor service was one reason UP cited for launching its PSR initiative, called Unified 2020.

However, CSX is on pace to see volume drop 4 percent in the first quarter, according to AAR data, and UP is only just beginning its transition to PSR, so it’s too soon to reach any conclusions.

Service disruptions and delays caused by inclement weather also impacted volume and performance from western railroads in the first quarter. In January and February there were snowstorms and a polar vortex in the Midwest. Terminals shut down since workers were unable to be outside with wind chills below zero, and equipment tends to malfunction too. In March there were floods from Nebraska to Iowa. Trucks have an inherent advantage in these situations because a driver takes a detour whereas a train is stuck to the track. When an obstruction blocks a train, a shipper will temporarily tender to truckload.

“We definitely had customers, particularly in consumer packaged goods, that used a truck to get around the flooding. It got to a point where they couldn’t sustain the really poor service, so they looked for short-term alternatives to get their goods to warehouses in time,” said Jon Krystek, chief operating officer with Knichel Logistics, a non-asset intermodal marketing company (IMC).

Weather may have also played a role in a shortage of well cars in BNSF and UP’s Chicago ramps. Not having well cars makes it impossible to load any container onto a train. Like a chassis links a container to a truck, a well or flat car links containers to a train.

In measuring the growth of intermodal shipments — or lack thereof — it’s also important to keep in mind that early 2018 volume was so strong that comparisons may not be realistic.

Compared with previous years, total intermodal volume in the first 11 weeks of 2019 is stronger than in every year except 2018. The same is true for domestic intermodal comparisons through the first eight weeks of the year. From that perspective, missing the all-time first-quarter high of 2.25 million domestic loads isn’t necessarily a poor performance, just not stupendous.

Whether looking at contract or spot market intermodal rates, many non-asset intermodal IMCs concede that rail isn’t as cost effective as it was five years ago.

There are still many cross-country lanes where intermodal rail is much cheaper than trucking, but there are also an increasing number of “tweener” lanes in which intermodal spot rates have climbed at a much faster pace than truckload rates in the last four years. Many of these lanes are between 700 and 1,200 miles, according to a JOC.com analysis of 45 lanes and conversations with IMCs. These hauls are two days on truck versus three to four on a train.

Despite a massive surge in truckload pricing in 2018 due to a lack of available capacity, spot rates today have fallen back to a point that truck is faster and more price competitive in more “tweener” lanes.

Based on a JOC.com analysis, domestic intermodal spot rates are about 5 percent cheaper than truckload on a 12-month rolling average versus a 20 percent savings in 2014-2015.

Although spot markets represent less than 5 percent of intermodal business, according to non-asset IMCs, these providers say contract savings are dwindling too.

“One of [the] potential reasons why you would see these results is because there is a pricing issue. But we’ve outlined so many ‘potential’ reasons and this is just another one. It’s a ‘potential’ reason,” Gross said.

Krystek acknowledged that as truckload capacity has eased, shippers have been converting intermodal cargo to truck to take advantage of dwindling rates.

Going forward, the fate of domestic intermodal will be determined by three primary factors: cost, service levels, and available trucking capacity. Without another trucking capacity crunch, shippers will choose intermodal only if it saves money and service is consistent compared with road transport.

Permalink Submitted by rmarshall@ashle... on Mar 29, 2019 6:53AM EDT
Train speed has very little impact on Intermodal rail service. With Intermodal, service is tied directly to railroad ramp efficiency...or lack thereof. The rail ramps are black holes. Shippers lose sight of their loads while the container is inside the ramp; at origin or destination. And, the railroads can't...or won't...provide information about the status of a shipment when the container is inside the ramp. Lastly, Railroads continue to operate their intermodal business units like it's 1993. No technology improvements in all this time. Very frustrating for this long time supporter of Intermodal and the railroads have no one to blame but themselves as freight migrates to OTR.
Rail & Intermodal›Intermodal Shipping

Global Shipping Outlook: A Sneak Peek at 2021
Port Performance North America: Managing Cargo Flow During a Pandemic — and Beyond
END_OF_DOCUMENT_TOKEN_TO_BE_REPLACED