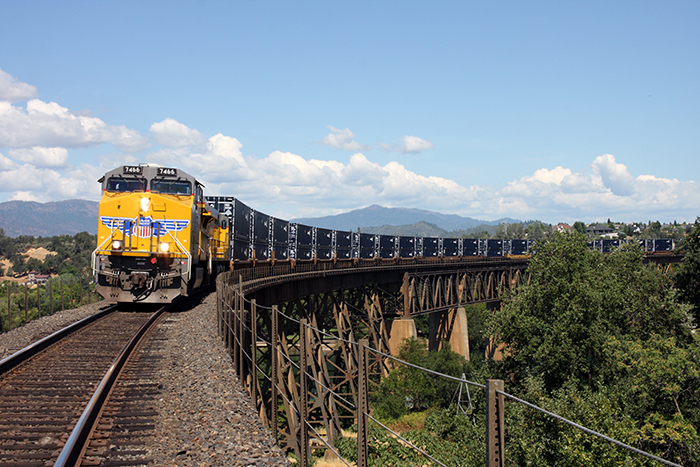 E-commerce and railroads aren’t often mentioned in the same breath, but US railroads are far from immune from the so-called Amazon effect. The rapid growth of online shipping and shifting fulfillment demands affect railroads directly and indirectly through their customers.

“E-commerce is the best thing that happened to box manufacturers in a very long time, and that’s been good for us,” Beth Whited, executive vice president and chief marketing officer at Union Pacific Railroad said at the launch of the 2017 State of Logistics Report on June 20.

In 2016, 1,155 US plants produced cardboard used in packaging, 465 corrugating plants, and 690 sheet plants, according to the Fibre Box Association. Rolls of paper weighing up to 6,000 pounds are shipped by boxcar to those corrugating plants where they’re made into cardboard.

Those boxcars are a long way from e-commerce’s last mile, but if online shipping increases demand for pulp, paper, and packaging, UP and other railroads stand to benefit. That’s a sign of just how far the reach of Amazon and other e-commerce shippers extends.

The length and depth of that reach was clear in the 2017 State of Logistics Report, authored by A.T. Kearney on behalf of the Council of Supply Chain Management Professionals and sponsored by Penske Logistics. Shipper spending on parcel last year overtook rail spend.

“Booming business brings new challenges for parcel carriers under pressure to meet the escalating service expectations of shippers and consumers,” the report said. One of those challenges is matching price to cost despite retailer promises of “free shipping.”

UPS this week said it would introduce peak holiday season surcharges, especially during the week before the Christmas holiday. FedEx is considering steps “to ensure that we have appropriate pricing related to volume expectations and capacity needs,” a senior executive said.

The rapid growth of online shopping is changing distribution and fulfillment models and inventory levels. “We’re seeing a move away from broader regional centers to more localized DCs and more next-day and same day-delivery,” Sean Monahan, a partner at A.T. Kearney, said.

For obvious reasons, railroads aren’t directly involved in last-mile delivery. However, they are involved in many other steps of e-commerce fulfillment, beyond raw materials movement. “We’re a significant supplier to both FedEx and UPS,” Union Pacific’s Whited said Tuesday.

That puts more pressure on railroads to improve service levels and work cooperatively with other modes, as well as with Amazon and its customers. “The Amazons of the world have completely different requirements for visibility than our traditional customers,” she said.

E-commerce customers such as Amazon and its shippers “really want an integrated solution,” Whited said. “They want a high level of visibility. That can’t be a railroad-only solution. There’s an opportunity to integrate with ports, with steamship lines, and with truckers.”

It’s an opportunity railroads can’t refuse, she said. “We’re seeing visibility as a base-level service demand from shippers,” said Whited. “It’s something we have to respond to.”